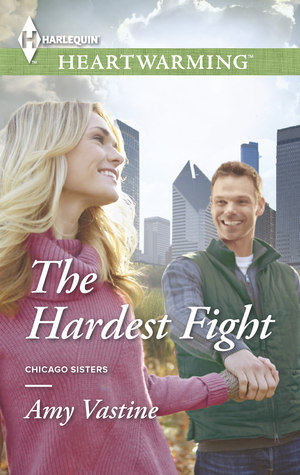 Blurb:
There’s no backing down this time.

Lucy Everhart expected her opposing counsel to be a slick, soulless corporate lawyer. Who else would represent developers intent on turning Chicago’s Safe Haven women’s shelter into condos? But she never imagined it would be Dylan Hunt. Clearly, he’s no longer the idealistic young man she fell for in law school. This is Dylan 2.0. The man who let her go without a fight five years ago—along with his passion for social justice, apparently. He may have compromised what he believed in, but Lucy hasn’t. Dylan has no idea what kind of fight he’s in for. But then again, neither does she.

I really enjoyed the first two books in this series and while this book also was good it was less good than the first two in my opinion. Lucy always was my least favourite sister of the three and I hoped that this book would change my opinion, but it didn’t. I still disliked her and that made this a hard read. I did enjoy the book, Amy Vastine knows how to write romances and the flow was nice and the writing style, but the characters and romance just didn’t work for me. What I liked most about this book was seeing the family interactions. Kendall and Emma, the two main characters of the previous two books, make frequent appearances and it was fun to see how they were doing and still getting part of their stories and happy endings as well as Lucy her story.

So Lucy is a character who I didn’t like. I tried, but there was very little in her personality that I liked. She basically blames her ex-boyfriend for “letting her go” and not “fighting for her” while she broke up with him. And she’s a bossy, aggressive person who can say harsh word and lie and make you believe it and I just felt like Dylan hadn’t done anything wrong and Lucy didn’t have anything to blame him for and it was just so frustrating seeing her be angry at Dylan while he was the nice guy who did what she asked of him and got nothing in return for it beside heartache. It should have been his decision as he nicely points out eventually and she took that away for him. It was his decision to make whether to stay with her, not hers. And grr this point just annoyed me to no end. Lucy is a pretty strong person who tries to force her beliefs on others. And while I admired that she fought for what she believed in I also thought she took it a little bit too far. Throwing away people their chips and mentioning it every time someone ate something what bad things were in it. Okay I get it she’s vegan, but that’s her decision, I didn’t like her pushing it on others.

I am not sure what to think of Dylan one the one hand I think he got the worse end of the deal. Lucy broke up with him and he never got to hear why. He lived five years not really living and still loving Lucy and then when they meet each other again they are on opposite sides. In the end ofcourse it turns out well, but I think he did some nasty things as well. He used his skills and people knowledge to try and convince them to sell why he knew how much it mean tot Lucy. Ofcourse it’s business, but I couldn’t believe how he could to that to the women he loved. I also though it was frustrating how it kept being mentioned how he could read everyone, but not Lucy. Ofcourse at the reader we get’s Lucy their point of view and do understand her and it was just annoying that Dylan couldn’t. It just made his “ability” seem less worthwhile and less realistic. What also bothered me was that he had big dreams, but he didn’t seem to care enough to actually chase them, he just stays were he is and doesn’t even try to change things until towards the end of the book when he get’s a sudden insight in his mother (who is also his boss) and talks with her.

I just didn’t feel the romance. It’s a weird combination of a second chance romance and an enemies to lovers romance. And I don’t like enemies to lovers romance as they feel unrealistic to me and most of them I read so far I just don’t feel the romance. Lucy was very hostile towards Dylan up until almost the end of the book. Dylan was still crazy in love with her, but she made it clear she wanted nothing to do with him. And she made that pretty verbally clear. She was nasty and said hurtful things and they fought more than they maked out. Ofcourse while she does says all those nasty things and that she doesn’t want to do anything with him, she is actually still in love with him as well. I didn’t like how she lied to Dylan about how she felt, just because she couldn’t deal with things. The truth comes out towards the end and they solve things, but it was too little too late. I never felt they had something between them. There are a few sweet scenes, but those were rare and the best few were at the end and at that point so many nasty and hurtful things were between them I saw no way they would make this work, but they did. They did it work, but it didn’t work for me. I just didn’t feel it.

The side characters were what makes this book shine. This author knows how to make the side characters part of a story and make them come alive. The Everhart family is pretty amazing, I loved how they are all there for Lucy even when Lucy keeps pushing them away, they are there to help there. Kendall has started her own family and we see more from her and the kids. And Simon and Jeremy were adorable. Eugene is probably my favourite new character of this book, he is Dylan’s best friend and after what he has been through I admired how he still continued to live and enjoy his life and even care for his grandson. I thought it was pretty amazing how he managed that. There is a conversation towards the end of the book that illustrated just how much he went through and how much it still hurts and I felt so sad for him and for what he lost, but also admired him for how he went through life after all that. Dylan and Eugene their relationship reminded me a bit of Max and Charlie their relationship, they are best friends and neighbours and are there to help each other out.

To conclude: this is the last book in the Chicago sister series and while I enjoyed it, I thought the first two books were better. There are some great scenes and sweet moments. My favourite thing about this book was seeing how close their family was and seeing the sisters interact with each other, this time from another point of view. I also liked hearing how Kendall and Emma were doing. On the other hand I just didn’t like the characters in this book, both Lucy and Dylan weren’t likeable in my opinion and it wa shard to enjoy the book fully because of that. I didn’t feel the romance and it felt like they were fighting more and hurting each other than falling in love again or growing closer. It just didn’t work for me. I would recommend this series to everyone who loves a good contemporary romance about a close family where each book features a different sister, it’s a great series and I am glad I got the opportunity to read these books.

You can buy The Hardest Fight here:
– Amazon
– B&N
– Kobo

What is the weirdest reason for a break-up you encountered in a book so far?

6 responses to “Review: The Hardest Fight by Amy Vastine”