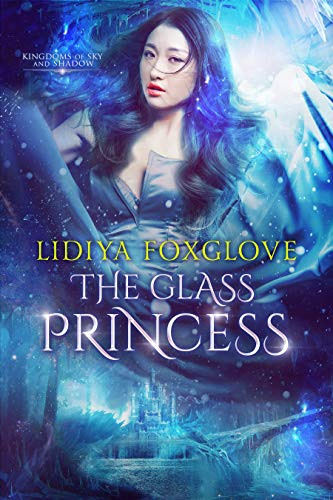 Blurb:
When I was a girl, my father forced me to swallow a magical crystal. The Dragon’s Tear turned my bones fragile as glass. I was no Ionger strong enough dance or learn to fight…or take any lover until my wedding day. I was destined to wed the King of the Dragons, and only he could restore my health.

Now it is time to fulfill the prophecy. To become King Aurekdel’s bride.

I don’t want him. I want the dashing young head of my guard, Oszin, who has been my best friend and secret crush since I was fifteen.

But Oszin can’t heal me. Only Aurekdel can. I already hate him and his tall, fierce warrior champion Lord Seron.

I really had no idea what I was in for.

Aurekdel is charming and clever and he wants to give me everything I ever wanted and then some. The love of three protective men, a magical garden, a blessed sword, and the role of a great queen. But there is one thing he cannot give me after all: a cure.

The prophecy was a lie. I am still broken and no one knows went wrong. I’m determined to learn to fight for everything I hold dear, but the truth of the prophecy will shatter the kingdom Aurekdel has built…and gain the attention of the dark dragon who will change our destiny.

The Glass Princess is about princess Himika who is getting married off to the dragon king as foretold by a prophecy. He is the only one who can cure her. Himika doesn’t want to be married to a king she never met and is already in love with her head guard. She also doesn’t know that it’s custom for the king’s champion to join them in the bedroom.

This was such a great story, that kept my attention from start to end. It’s great to be back in this world that’s already familiar, but the storyline is very different than the first series. Which makes it feel familiar and unique at the same time. I loved seeing the story unfold, the character develop and the romance progress. There are some nice twists and the reveal at the end was awesome and I can’t wait for book 2!

I liked following Himika’s story and the author really wrote it all very convincingly. Himika really feels strongly about this marriage, she doens’t want to marry the dragon kind, but also knows she doesn’t have a choice. And I loved seeing her slowly warm up toward the dragons and the dragon king as the story progresses. It was done in a way that felt very believable.

While we had met the dragon king Aurekdel before in the Guardians of Sky and Shadow series, we didn’t get a good feel for his personality there. And I liked getting to know him better. He notices Himika’s reluctance and I loved how he respected her wishes and was careful with her, but also respected her and encouraged her not to give up and do what she could. I also thought it was interesting how the king was blind and how that affected what he could and couldn’t do and how he learned to live with it, but it also bothered him at times. I thought it was portrayed realistically and I liked how Aurekdel and Himika connected over that topic too as they both have a disability of sorts.

I thought I would like Oszin the most as Himika already loves him, but I actually preferred both Aurdekdel and Seron to him. That’s not to say Oszin isn’t a great characters too. He and Himika share a bond and have known each other for so long, that their relationship is very different than her relationship with the other two. I did think he could be a bit too protective of her at times, but that fit his character. And it was nice how they had all this history and psst together already.

And Seron was so interesting too. I liked how he was a bit shy and awkward around Himika at first. he knew Aurekdel intended to share her with him, but he wasn’t sure what to think as he doesn’t know how to act around women. And when he starts developing feelings for her as well, it’s awesome to see. And I loved his soft side. He’s this strong and tough battle hardened warrior who gets shy and has a soft side too and I liked that contradiction.

The romances were well done and I felt each of the romances was developed well. I also liked how Himika’s relationship with each of them is very different. Their romances progress in a different way and their relationships all feel differently. While Seron and Oszin are more protective, Aurekdel understands better how it is to live with a disability as he’s blind. While Oszin knows her very well and is very close to her. And then Seron who doesn’t get too close at first, but then also develops feelings for her. It was great to see the different relationships and I can’t wait to see how the fourth member of her harem will fit in there.

The harem in this book is pretty different from the harem in the first series and most other reverse harem series. As Himika is married to the king. She’s his wife first and foremost and they allow the other two love interests to join them in the bedroom. It’s common for the dragon king to share his bedroom with his champion, but not for anyone else to join them. It was interesting to see the harem develop and I am curious to see how it will progress in the next books when another member gets added.

There are a bunch of sex scenes in this book, but while it’s a fast burn, it isn’t too full with sex scenes. The story and the relationships get enough room to be developed too. There are some really well written sex scenes in it and again I am surprised how different each scene is and how it adds something. There is a small hint of a bit of MM as well, but I am not sure if that will be further developed and seems to get almost completely ignored. I wouldn’t have minded a bit more around that and how the characters felt about that.

I also liked seeing how the different member of Himika’s harem interacted with each other. At first Aurekdel seemed to have all the power in the relationship and controlled who would enter the bedroom, but he was also very considerate of Himika’s feelings and I liked how open minded he was and dedicated to making her happy. And while he was so smooth and easy with her I also think he was a bit jealous about the way she already loved Oszin. It was great to see Seron and Oszin grow a bit closer over the course of the book. And Seron and Aurekdel already were so close, but this relationship with Himika, changed their relationship as well. I think Seron even felt a bit of resentment at times.

While it’s a spin-off, there are no appearances from the main characters from the first series, what they do impacts this series a bit tough. And while it mostly works as a separate series set in the same world, I do think starting with the Guardians of Sky and Shadow series is best as this series does build forward to everything that’s achieved in that series. There are also references to the characters. I think you would miss some deeper understanding of the world, the priestess and even Himika’s past if you haven’t read the first series. This series does wonderfully as a spin-off, we meet new characters and familiar ones, but it also builds perfectly upon the first series.

While there were things we already knew about the world of the dragons from the Guardians of Sky and Shadow series, this series builds upon that and elaborates on it more. There more we learn about the dragons, their society and customs. And also the war with the rock dragons and mist dragons and we get more information about that too and that plot lines gets a lot more important here.

To summarize: this was such a great read that held my attention from start to end. I loved being back in this wonderful world that Lidiya Foxglove has created. There are characters we already know and some new characters too. It works wonderfully as a spin-off series from the Guardians of Sky and Shadow series with how it builds on that basis set there and also has a unique feel. I liked Himika and the author writes her very well with how she doesn’t want this marriage at all at first and then slowly warms up to the king and the dragons. There romances are all well done too. I liked the three members of her harem so far. The harem does have a pretty unique feel as she is married to only one of them and this causes some interesting dynamics between the characters too. I liked getting to know all the members of her harem and also seeing how they interacted with each other. I liked how there is more we learn about the dragon world and also the plot line of the war with the traitor king that gets explored more. And that reveal at the end leaves me so curious to where this series goes next and I can’t wait for book 2!

What’s the last book you read with royalty? Do you like reading about royalty?

12 responses to “Review: The Glass Princess by Lidiya Foxglove”