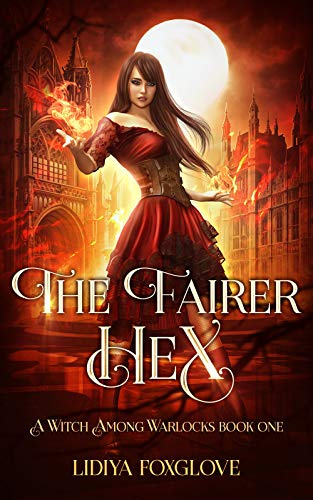 The Fairer Hex (A Witch Among Warlocks #1)
by Lidiya Foxglove

Blurb:
So apparently my mom was a witch. And not just a witch, but a witch who turned bad. My poor, sweet, normal dad wanted me to have a good college experience. Instead I get a magical offer I literally can’t refuse, from the world’s most elite school for warlocks.

WARLOCKS. As in GUY WITCHES.

Even though I definitely have lady parts, somehow I ended up at a warlock school to learn the gentlemanly arts (which are a lot more badass than, ahem, lady magic). Did I mention the witch world is stuck in the 19th century? Unmarried witches and warlocks barely see each other outside of society balls, which are still a thing.

No one knows how I ended up here. I’m thrown into a whole new world where I am outcast and friendless, except for:

—Firian, the enigmatic fox shifter who has been watching over me since I was born.
—Alec, my new roommate, a sexy-as-sin incubus enchanted not to lay a hand on me. For safety. Or cruel and unusual punishment.
—Montague, the black sheep of the school since he got turned into a vampire on spring break.
—Harris, an arrogant ass from the most elite of all magical families. Okay, he’s not my friend but he’s Montague’s. I’ll work on him.

My existence here breaks all the rules. Am I here for the right reasons? Or am I the pawn meant to destroy the very world I’m starting to love? When my magic proves stronger than anyone expects, and the school is attacked by a demon, I’ll need help from the four gorgeous magical men who are willing to break a few rules with me. They’re each forbidden to me in their own way, and the greatest danger of all might not be demons, but falling for them. All of them.

This is the first book in A Witch Among Warlocks, so expect cliffhangers. It’s a medium burn reverse harem story intended for 18+, which means, BE PATIENT LIDIYA, YOU’LL GET ‘EM THERE. And I will, dear readers, oh, I will.

I was really excited for this book. I’ve read multiple of this author’s books and most of those I really enjoyed. This sounded like it would be the start of another great reverse harem series. Unfortunately it just didn’t work for me. It fell flat with not enough of the things I wanted to see and it didn’t keep my attention. I kept hoping it would get better and grab me, but in the end it just didn’t.

There were some good parts. I enjoyed the set-up with how Charlotte is a witch who under mysterious reasons get accepted into an all boy school. It was interesting to see how she found her place here and tried to make things work, but also had enough personality to stand up herself when she really wanted something. She was a likable enough character and the four boys who are her love interests all had their own personality and were easy to keep apart. Which was well done. Their relationship with Charlotte was also unique as I’ve grown to expect from this author’s previous books. And at the end when the romance really starts forming we get to see a bit of how they all interact with each other too. I also liked that it was a bit of a slow build, but it still felt relatively quick somehow.

I think my main issue with the book was the pacing and the way things lacked depth/ impact. There are multiple important events and happening and it just felt like they got brushed over. Oh this happened and then the story just continued. I wanted to feel the impact of these events, how severe this was or how it impacted the characters. Instead the story just seemed to move on, important hints might come back and play a role later, but it didn’t feel like enough for me.

Due to this the reveals and events lacked impact and the vibe of the book stayed so steady that eating dinner and summoning a demon felt like it had the same impact. Some events felt almost a bit rushed with the way the characters moved on again. It’s not a short book, I think it’s about 400 pages long, but at the same time it felt like there wasn’t enough happening. There are things that happen ofcourse, but I think with the events lacking the impact I was looking for, it felt like nothing mattered as strongly. At times it felt like nothing big happens and when something big happens it lacked impact.

I also would’ve liked some mystery/ foreshadowing/ build-up throughout the book. There are some interesting things going on, with an important warlock dying, a teacher who might be hiding/ lying about something and Charlotte being accepted in this school under mysterious circumstances. But I felt like there was potential for more here, I didn’t feel engaged or excited about it as there wasn’t as much build-up and mystery surrounding it.

While I liked most of the main character well enough, I never felt invested enough that I really cared for them in the way I had hoped. Charlotte has a difficult time adjusting to life in this all boy school and she gets bullied a bit. Luckily she has some guys who stick by her. Montague is a friendly and charming vampire with a bit of a struggle adjusting to his vampire side. Then there is Firian, her familiar who has watched over her for long and is now coming out of the shadows to stand behind her. Harris, who is quite frankly a bit rude and arrogant, but there are hints there is something more to him. And Alex who is Charlotte’s roommate, he’s an incubus who needs to learn control. I liked how different they all were. There are even some chapters form the boys their point of views. I just wanted more to really feel invested and connected and that was lacking.

The romance is a bit of a medium build. Charlotte likes them all form the start, but it takes some time before she grows closer and only by the end of the book they even start dating for real. I liked that it took some time, but even then I wanted more scenes withe the guys and seeing her grow closer. I also didn’t feel fully comfortable with the situation with Firian, he is her familiar and later we find out he can’t go against her wishes, which just felt a wrong. It gives her power over him and he can’t go against her even he doesn’t believe in it because of their bond. And it also made the romance feel off to me, as he can’t love her if she doens’t love him and the way he got forced into the harem situation.

The way the harem aspect was build worked well enough. I liked that they communicated about it and agreed on this and how it all made sense to them. Not all of the boys are in the hare yet, which leaves room for expanding in future books. I just didn’t like how Firian got added. It was clear he wasn’t on board with it, but had to be because Charlotte was, which didn’t work for me.

I am glad I read two of the Brides of the Sinistral realms books before this one as I have the feeling it all takes place in the same world and having read those books it gave me a better understanding of this world already. I think this really helped as I thought the world building in this book was lacking a bit. And having a bit of background knowledge helped me form a better picture of the world. I was interested to see the opposing point of view in these books as the Sinistrals are the bad guys here. I just wanted more about the magic and the world so it could feel more alive. And more magic! This book is all about people with magic and there was very little actual magic being done. The parts that dealt with magic were interesting, so I wanted more of that.

To summarize: I really wanted to like this book, but I didn’t. The premise was good, the characters likable enough and the four boys are different enough. But it felt like event slacked the depth and impact I wanted. The pacing felt weird, with things being rushed over, but at the same time it felt slow with not as much happening. There are some big reveals and events which lacked impact for me. The boys were different enough that it was easy to remember who was who and I liked it was a bit of a slower build-up, although I still didn’t fully feel the romances. It bothered me how Firian couldn’t go against Charlotte’s wishes as that felt wrong to me. I felt the world didn’t come as alive as I had hoped and I wanted more magic. Luckily I had a bit of a feel for the world thanks to having read two of the Brides of the Sinistral realms books. Sadly this book just wasn’t for me.

What’s the last book you read that didn’t quite work for you?

6 responses to “Review: The Fairer Hex by Lidiya Foxglove”