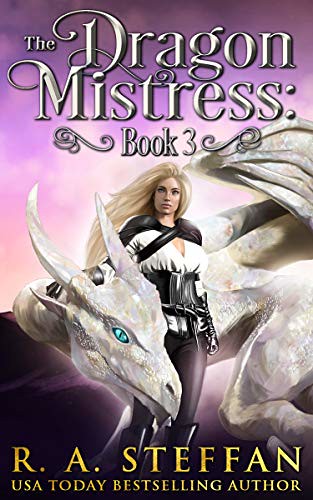 Blurb:
Our secret is out, and now we’re marked for death.

A lone survivor escaped the mountain battle, carrying news of our dragons’ existence to the court of Prince Oblisii.

Utrea’s dragons were supposed to have been wiped out long ago. Only these five remain—a male and four females. They’re all that’s left to carry on the species, but first we have to keep them alive.

The prince will come soon with his army, and I’m stuck on a mountaintop with my four knights in tarnished armor. Sometimes, I think these men will be the death of me long before the royal soldiers arrive. Other times, I think they may be my only salvation.

Before the five of us can flee Utrea for safer shores, I’ll have to form a soul-bond with the male dragon. Until then, he’s little more than a wild animal, dangerous and unpredictable. And without the male, we’re lost, since the future of dragonkind rests on his shimmering white wings.

Yet the idea of the soul-bond fills me with terror. If I bind myself to him, his death would mean my death, just as my death would mean his. Already, the men I love are binding the female dragons one by one, tying their souls irrevocably together. With the others already bound, everything depends on me.

But danger lurks whether I accept that dragon-bond or not. I was already a wanted woman, after I spurned Prince Oblisii and escaped from his harem of concubines. Not only that, but I also fled straight into the arms of a group led by Oblisii’s disgraced older brother—Rathanii, the man who should have been Utrea’s king.

If Prince Oblisii gets hold of me again, death will be the least of my worries.
And the gods only know what the others might do to try and get me back.

I read the first two books in this series last month and this month I decided to return and pick up book 3. The first chapter or so was a bit rough to get back into the world and it starts with a sort of important event, but it just felt a bit off somehow. It lacked the impact and depth I wanted from it for me, but luckily shortly after that the tone changed and I was totally invested again. It’s another action packed read and I love reading about these characters and world.

At the end of the last book the characters got attacked and one of the attackers escaped and they are sure she brings the news of dragons still existing back to the prince and king who have a rule to kill all dragons to maintain the peace treaty with the neighboring country. The main characters and her 3 friends are preparing for the worst. But there is one big problem two of them haven’t bonded with their dragons yet and they can’t leave without the last male dragon in existence. And so starts this book.

This book is a hard one to read at times, the characters go to a lot of hardship in this book. I don’t want to go into details and spoilers in my reviews, but this book sure tests the characters. There are some difficult situation they have to go through and by the end of the book it’s clear more difficult things are still to come. I was a bit annoyed about something Frella does at the start as it could’ve been so easily prevented, but it was in character, but I still wish she had acted a bit more careful especially with their current situation. But even with the hard parts, it was a great read. It was interesting to see how the kingdom reacted to knowing the dragons are still alive and how Frella and the rest reacted and dealt with this threat.

There is some great characters development in this book and some nice progresses of the polyamory relationships as well. I liked how we learn more about the characters as more secrets come to light. We finally get an insight in Rath’s past and it was great to finally see him open up a bit. There also is more about Nyx and it’s just so sad, but I also like how he’s slowly trying to work past it. The romances also grow and develop in this book and I really liked seeing them all grow closer.

While I was not surprised by the twist at the end and in fact predicted that, it does make me very excited for the next and last book. I am curious to see what will happen there and how this series will be resolved.

I also like how we see some familiar characters form the Horse Mistress and Lion Mistress series in this book, which is a fun addition for those who read the series.

To summarize: Another great book in this series. The danger in this book is larger after what happened at the end of the previous book and it was great to see how the story progressed. There are some difficult parts as the characters go through a lot of hardship in this book. But there are also plenty of beautiful and uplifting scenes, I really liked learning more about the characters and seeing the romances develop. I am very excited to see how this series gets wrapped up in the next book.

2 responses to “Review: The Dragon Mistress Book 3 by R.A. Steffan”