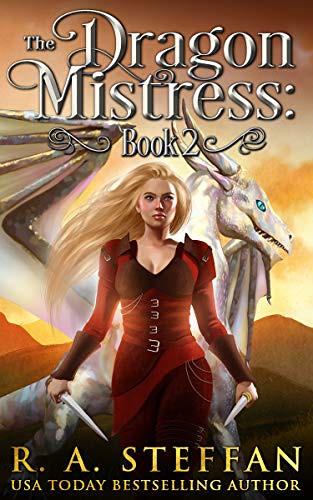 Blurb:
The survival of the last living dragons rests with me and my misfit friends.
So… yeah. No pressure.

Mind you, this whole thing would be easier if two of our number weren’t hell-bent on killing each other. Rayth and Nyx have both been hiding secrets for a very long time, but now they face a choice. Let go of their ugly pasts, or watch the future burn to the ground.

We won’t be able to hide five hungry, growing dragons in the mountains forever. As soon as someone catches sight of them, every soldier in Utrea will be after us. And there’s no way we can fight for our dragons’ survival when we’re this busy fighting amongst ourselves.

I’ve always been the queen of questionable life choices, but falling for four proud, stubborn, damaged men at the same time is a new benchmark even for me. What we’re building with the dragons—and each other—could be amazing beyond belief. It could also end in tragedy beyond measure.

If I want it to be the former, it looks like I need to start banging some heads together.
Otherwise, our hopes and dreams could well go down in flames.

The Dragon Mistress by USA Today bestseller R. A. Steffan is a medium-burn fantasy romance series where the heroine doesn’t have to choose one person at the end. It is part of the Eburosi Chronicles, along with The Horse Mistress and The Lion Mistress. It’s not necessary to have read any of the other books in the series before starting The Dragon Mistress arc.

After finishing book 1 I jumped right into book 2 to continue the series. The Dragon Mistress book 2 was a great sequel. It furthered the plot lines and we got to know more about the characters and the dragons, which was fun. I liked seeing the story progress and it was another enjoyable read.

There is however a lot of waiting in this book. waiting to see what happens, waiting to see if they get discover and waiting to see how some characters will behave. While I didn’t mind the slower pace in terms of plot to further more of the relationships and show more about the characters, it also felt that the relationships didn’t progress as much as I had hoped, at least at first. Most of both the plot and character progression is toward the end of the book. That made the end action packed and full of excitement, but the rest of the book felt less eventful in comparison. There are plenty of interesting scenes along the way and the author does a good job of speeding up the less eventful parts.

At the end of book 1 there is an interesting development regarding Nyx and I was curious to see how that would progress in this book. It sure was interesting how this changed things and the dynamic between the characters. In this book you see Nyx and Frella slowly getting closer and it becomes a bit more clear why Nyx is so broken. For most of the book the pace is a bit more leisurely and I liked the focus on the characters. It was great to see Frella and Eldris grow more comfortable with each other and open up a bit as well.

There are some secrets and stories of the past that come to light in this book and I liked how we got to know the men a bit better, but the two big reveals where one of the characters tel their story felt a bit forced and unnatural. I would’ve liked a bit more build-up or having the confession come from themselves instead of someone else telling them to get over it basically and tell the story. It just felt a bit off to me the way it happened. But I did like that some of these secrets now come to light. And it does explain a lot about the two men who reveal some of their past.

Frella is a great main character. I like how she knows what she wants and how she sometimes blurts things out. She has this joy for adventure and jumping right into things, but it becomes clear in this book that she also has been spared much of the cruelty that is out there and she has to face some hard things in this book. I also like how she clearly has how own troubles and fears and those come a bit more toward the surface in this book. I am looking forward to see how she will develop over the course of the series.

While at first the dragon situation mostly stays the same, there are some big developments later in the book. I just wish we knew more of the dragons and dragons riders of the past and how the whole thing worked, but maybe we find out more in future books. There isn’t as much furthering of the world building, except for some small tidbits.

To summarize: this was a solid sequel and I enjoyed seeing where the story went next. It’s another enjoyable read and read through this one quite fast. There are some interesting changes and reveals and secrets that come to light. But I felt most of the big events where clustered toward the end, which made the rest of the book feels a bit slower and less eventful. The ending is packed full of action and developments and I am curious how that will shape the next book. I really like reading about Frella and seeing how she handles things. It also was interesting to see the relationships among the characters develop. Although I found some of the reveals and how they got there feel a bit off and sudden with lack of build-up and then just everything being revealed at once. I didn’t really care for the additional point of views in this book, having the men point of views ruined some of the mystery and I didn’t think their chapters added much. I would’ve preferred to only have Frella’s point of view. There is a bit more we see of the dragons, which was interesting. All in all I liked how this series continues and am looking forward to book 3.

2 responses to “Review: The Dragon Mistress Book 2 by R.A. Steffan”