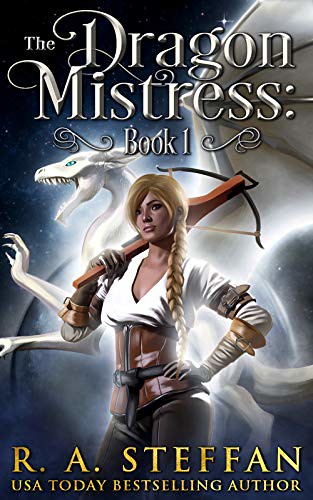 To survive, they must form soul-bonds with five humans who are pure of heart and resolute of spirit. Too bad they’re stuck with us instead.

The angry drunk. The shameless womanizer. The coward who ran away and got his comrades killed. The ice-cold assassin for hire. And me, the girl with abandonment issues as deep and wide as the Southern Sea.

I left home in search of adventure. Instead, I stumbled into the middle of a desperate struggle for survival.

If we manage to get through this mess, it’s going to be a miracle.

The Dragon Mistress by USA Today bestseller R. A. Steffan is a medium-burn fantasy romance series with dragonriders, where the heroine doesn’t have to pick one person at the end. It is part of the Eburosi Chronicles, along with The Horse Mistress and The Lion Mistress. It’s not necessary to have read any of the other books in the series before starting The Dragon Mistress.

A special note for Fantasy readers: herein, you will find love scenes in several interesting and unconventional permutations. If your gut reaction to that is “Eww” or even “Meh,” you probably won’t enjoy this series. Also, be aware that The Dragon Mistress: Book 1 is the first installment of a series arc. It is not intended as a standalone read.

I love the Eburosi Chronicles and I was excited to start this new series set in the same world. The Dragon Mistress is told from Frella’s point of view, she’s the adopted daughter of the main characters from the Horse Mistress series and the sister to Favian who is one of the main characters in the Lion Mistress series. But this one can be read as a standalone, although you will miss a bit of background information and knowledge about Eburos. But as this one takes place in a different place then the first two series, I think it would definitely be possible to start here if you like.

I really enjoyed this book. I quickly read through it and just wanted to keep reading as I was excited to read more about Frella. I was curious to see how she would get herself out of the trouble she finds herself in and also how she will connect with the men she meets. There is plenty of adventure, some romance and some sex later in the book. And ofcourse dragons. This book is clearly the introduction, setting the stage for what’s to come, but it was a thoroughly enjoyable book and makes me really curious and excited for the later books in the series.

Frella makes for a great main character. She has a taste for adventure and has quite the temper. She also has some abandonment issues. While she gets herself into trouble multiple times, she’s also capable and smart. I liked reading about her. She’s also quite openminded due to her upbringing.

The four men she meets along the way are all interesting as well. They all have some past or things to hide and we only get some glimpses of those things, which makes me even more curious to learn more about them. While I feel like we only scratched the surface of who these men really are, it was easy to form an image of all four of them and after the first few scenes I had no trouble remembering who was who. Rayth is the one I like the least so far as he can be quite rude, although I except he will become more interesting as the series progress I have a hard time liking him so far. Eldris and Aristede are both great. Eldris is kind and steady and Aristede is the charming type. I like the dynamic between them and how they are clearly good friends. And Nyx is great too and I like how he is a bit shyer and quieter than the rest.

I like the slow steps Frella makes into romance with some of the guys and how her relationship with each of them develops in a different way. I am excited to see how the romance will develop. I liked how she already trusts and feels comfortable with some of them and I thought their romance developed in a realistic manner even if things progressed fast, it felt right for these characters. There is a steamy sex scene toward the end of the book and I am always impressed with how this author manages to write good sex scenes that are different from what you read in most books while at the same time also showing the caring and kindness between the characters. Even in the middle of the sex they communicate and make sure everyone is enjoying themselves, which is great to read about.

It was interesting to have this book take place in a totally different country than the first two books. At first I was a bit surprised by this development, but it totally makes sense why the story is set there. Although I would’ve liked to see a bit of Eburos, that would’ve slowed down the start of the book, so I can see why the author decided to start the book where she did. There are no recurring characters form the previous series due to this, although there are some mentions of those characters and events that take place in those series.

I enjoyed learning more about this country and it’s customs and also how they differ. There are some fun scenes where we see the differences between Frella and her customs compared to the characters she meets. And then there are the dragons. We only get a glimpse of them in this book, but I can’t wait to read more about them and get a feel for their personalities as well.

To summarize: This was a great start to this new series and I wanted to keep reading to find out what happens next. Frella is the main character of this books and she finds herself into some trouble while visiting a different country. I liked following her story and reading about her and the four men she meets. Frella was smart, capable and confident, but also has some abandonment issues. The four men she meets all have some secrets or something in their past that shapes who they are and we only get a glimpse of what that is, but I liked getting some glimpses and wondering what more there is to these characters. They are all different and it’s easy to remember who is who. I liked the beginnings of the romance and how Frella warms up to the guys in varying degrees. There is a bit of sex toward the end of the book and I like the way this author writes sex scenes with how the characters care about each other and are considerate during the sex. It was interesting to read about a different country with different customs than Eburos. I also liked the dragons and I am excited to see how that part of the story will continue. I am really excited to see where the rest of this series goes!

Tell me about one of your favorite fantasy worlds?

3 responses to “Review: The Dragon Mistress Book 1 by R.A. Steffan”