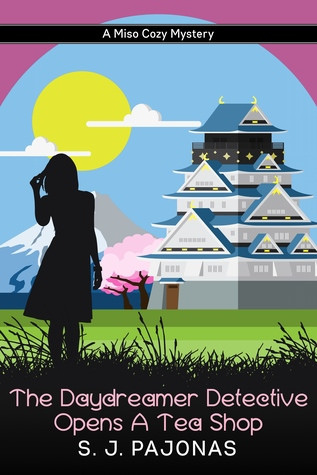 Blurb:
Mei Yamagawa’s bad luck is almost at an end. Her tea shop is a week away from opening, she and Yasahiro have planned a trip away, and the future is looking bright and hopeful. But when Yasahiro’s ex-fiancée, Amanda, shows up unexpectedly, demanding his time and presence, all of their plans dissolve. Amanda is tough and drives Mei up the wall, so it’s no surprise when Mei tells her to get lost, only for Amanda to be murdered a few hours later. Yasahiro becomes the prime suspect, and Mei must put everything on hold to help free him.

Following Amanda’s past through her digital footprint, Mei uncovers secret lovers, shady business deals, and the biggest secret of all, why Amanda and Yasahiro broke up in the first place. With everyone turning against her and the case under media scrutiny, tracking down the killer becomes an obsession Mei can’t give up. There’s no turning back, though, because solving the murder means getting her life back. Not solving it means losing everything forever.

My Review:
I received a free copy of this book from the author and voluntarily reviewed it

Always when I pick up a book by SJ Pajonas I know I am in for a good read. There are some authors whose writing style just works for me and Pajonas is one of those authors. As soon as I start reading one of her books I get sucked into the book and by the time I finish the last page I feel both happy and sad. Happy because of how good the book was and sad because now the wait begins till I can read another one of her books.

I’ve enjoyed the Daydreamer Detective series from the first book, but this book is probably the best one so far. It’s one of those series that gets a bit better with each book. Which only makes me even more curious what the next book will bring. I enjoyed every second spent reading this book and I was really absorbed in the story.

The Daydreamer Detective Opens a Tea Shop starts on a positive note. Mei is in a good place and she’s excitedly looking forward to some of the plans she has in the making, one of which is opening her own teashop. While it’s part of the title, it’s actually only a small part of the book, but I am sure it will be a bigger part of future books. I am really curious to read more about the tea shop. Ofcourse just when things are going well for Mei her luck changes and she lands in a very difficult situation.

Soon after the start of the book Amanda shows up. We heard of her in previous books as she’s the ex fiancé of Yasahiro, Mei’s boyfriend. In this book we get to understand what kind of person Amanda really is. She’s really nasty and I can’t believe Mei put up with her for as long as she did. And then Amanda gets killed and that’s the start of the murder investigation. I liked how the murder didn’t take place immediately at the start, but we actually saw Amanda alive for a bit longer. As that helped get a feel for her character. One thing I still don’t understand is why Yasahiro and her were engaged. I just can’t see it. And Yasahiro is very tight lipped about the whole thing, so in the end I still don’t understand. We do learn why they broke up in this book, which is another thing that wasn’t clear until now.

The mystery was very well done. Eventually I came up with some suspects, four to be precise, but the pieces just wouldn’t fall on it’s place. Who was involved and who not? It was a good mystery and I liked feeling like we got a bit closer every time, but still not quite there. I did predict a few smaller twists, but wasn’t quite sure about who the murderer was until right when Mei and the others figured it out. I did feel like the resolution of the mystery felt a bit rushed and I would’ve liked to get a bit more information about the murderer and the motive towards the end. It was pretty obvious what the motive was, but I still would’ve liked a bit of conversation regarding that to get that confirmed.

There’s a lot of focus on the characters, especially Mei in this book. Mei really goes through a lot in this book. And I felt so bad for her at times, she’s already in a difficult situation and it just feels like more and more things pop and make things even more difficult for her. I like Mei her determination in helping Yasahiro and solving this case. She has to go through a lot and I am curious to see how the events in this book change her and how what happens continues in the next book. I would’ve liked to get a bit more of a feel for Mei her opinion about a certain thing that happened, although by the end of the book I was pretty sure we knew. I just would’ve liked to see more of her thoughts about it as at first I couldn’t quite get a grip on what she thought. I felt like Mei and the other characters felt very real. That’s another thing I like about Pajonas her books, everything feels so realistic.

On the romance front this book is on the one hand very mild on the romance, but I also think that what happens in this book will end up being a big turning point in their relationship. Amanda always has been someone who stood between them and I hope with everything that happened here that finally got resolved. I feel like they will come out of this stronger and the end of the book was so hopeful and uplifting and seems to support that.

But in this book itself we don’t see Yasahiro and Mei together a lot, due to circumstances they are apart for a long time and I was a bit sad we didn’t see more of them together as I really like them together. I also felt a bit sad that Mei still doubts Yasahiro so much, but on the other hand I also got it. Yasahiro didn’t tell Mei everything and now they land in this big mess and after some of the things that were said and happened I can understand why Mei isn’t sure where they stand at times. So yes I get it, but on the other hand it also made me feel sad as I want her to know she is a good person who deserves to be loved and Yasahiro is perfect for her.

To summarize: this was such a good read! I love Pajonas her writing style and enjoyed every second of reading this book. The mystery was a good one. I liked how we got to meet Amanda before she was killed as that gave me a better feel for her as a person. I had four suspects for a long time, but wasn’t quite sure who was the murderer and how everything fit together. I figured things out shortly before Mei and the others did. I did predict two smaller twists as part of the story. I really liked seeing Mei show her personality in this book, her determination to help Yasahiro and solve this case was admirable. But she has to go through so much in this book, I felt so bad for her. It’s a difficult book for her. But I am curious to see how she will change because of what happened in this book. This book is pretty low on the romance and I was a bit sad we didn’t see more of Mei and Yasahiro in this book as I love them together. But on the other hand this book is also very important for their relationship I think. And I can’t wait to read the next book and see how things play out there! This is one of the best books I read so far this year!

What’s the best book with a mystery you read this year?

12 responses to “Review: The Daydreamer Detective Opens A Tea Shop by SJ Pajonas”