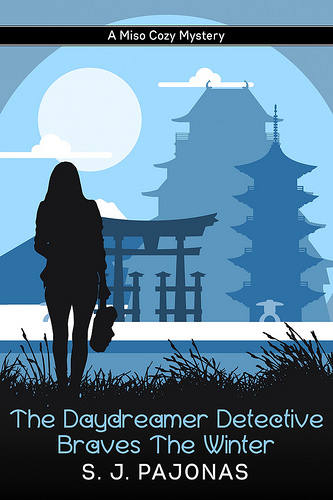 Blurb:
December has set in and just when the rural town of Chikata is recovering from one murder, Mei and her new boyfriend, Yasahiro, find their friend, Etsuko, dead in her apartment. Etsuko was sweet and talented, and now everyone suspects her longtime boyfriend killed her. Mei doesn’t believe it, though, and she vows to help solve the crime.

But Mei has more to think about than murder. With the barn gone and their vegetable stores destroyed, she and her mother are down to their last canned goods and no money for heat. Mei’s mom is fortunate to find work, but Mei must fend for herself, get a job, and keep their financial situation a secret from Yasahiro. In pursuit of paying work, she stumbles onto a new witness to the crime, and before long, the dead woman’s secret life unravels before everyone’s eyes. Half-starving and out of her element, Mei is on thin ice, and it’s going to take a whole lot of ingenuity and quick thinking to solve the crime before the killer gets to her as well.

I really enjoyed the first book in this series and started this book as soon as I received my copy. The Daydreamer Detective Braves the Winter is even better than the first book. The mystery is very well done in this book and the continuity in this series is great to see. We clearly see the results of the events that happened in book 1 and this book nicely builds upon that. So I would definitely recommend to read this series in order to maximum enjoyment. And with every book Pajonas writes, it just feels comforting when I read one of her books, her writing style just works for me and even while I had little time to read I instantly got sucked into the book again when I picked it up.

In this book we see Mei struggle with what happened in book 1 in more ways than one. The personal effect to her and how the events hit her, but also the situation Mei and her mom are in now. They really struggle and I felt so bad for them for what they had to go through, but I also got why they didn’t want to ask other for help. I could relate to that. The focus on this book is pretty much on the murder mystery and then Mei her personal life and situation next to that and I thought Pajonas did an amazing job combining the two. And all the plot lines where so interesting. There is one scene towards the end that bothered me and made me feel uncomfortable and I had hoped that part would play out differently. But besides that I really enjoyed this book.

I really liked the mystery in this book. This is one of the best mysteries I’ve read so far in a book. Pajonas took a risk and made the murder victim someone who was nice and likeable. In most cozies the murder victim is an unlikeable character, so I really liked the twist. And she was so nice and sweet, who would’ve wanted her dead? Slowly we find out more about Etsuko her life and it was so interesting to have the mystery slowly unravel like that. There was one part towards the end which seemed a tad too easy, but then again it would make sense the character would do that in her situation, so I thought it was realistic. I liked how complicated the mystery was, with some twists and turns and then I thought I had figured it out and it turned out to be something different. It was really well done and I loved how the mystery was written and developed.

Mei is in a tough situation at the start of this book and we see her deal with personal issues next to the murder mystery. She’s looking for a job, dealing with the aftermath of the events in book 1 and still coming to terms with her relationship with Yasahiro. We really see Mei her personality in this book, with how she keeps going even though the situation is hard. I could relate to her and really liked her as a character. She changed and develops a lot in this book. I really liked her job development in this book and I am pretty sure I like where that plot line is going with how things end at the end of this book. I had expected that plot point earlier in this book already, but it was done well and I can’t wait to see how this develops in the next book. I am also happy how we still see her daydreaming ways in the story as it really gives a feel for her character and how she thinks. I also liked how Mei got involved into the mystery and how she’s friends with Goro the police officer and he allows her to help the investigation.

The focus in this book seems to be more on Mei, although two of my favourite characters Yasahiro and Mei her mom still play an important part as well. We also see Mei her friends who run the bathhouse and ofcourse we learn more about Etsuko through the murder investigation. We also meet some new side character that I hope we’ll see more in later books.

Then there is the romance, while in most cozies the romance stays a minor plot line, that’s true here as well, but I also feel like it gets more focus as in other cozies. And that really works for me. I love seeing Mei and Yasahiro together. The really grow as a couple in this book and learn a lot about each other and get more comfortable around each other. There are some issues they have to deal with and I liked seeing them work through them. This is another thing I like about Pajonas her books how she writes her romances. these two are great together and we see them get together and also see the issues that pop up after they are a couple. I was just talking to another blogger while reading this book about how rare it is to see that in a romance and it’s one of the things I really like seeing in a book. It did bother me a bit about how Mei had to lie to Yasahiro about something at the start of the book, but I liked how it got resolved eventually. I also was a bit sad the sex scene was mostly behind closed doors though as I would’ve liked to read the whole scene.

To summarize: this was an amazing sequel! It nicely build upon the events of the the first book, while also introducing a new mystery and new plot lines. The mystery was really well done, with a likeable character as murder victim and a mystery with a lot of layers. I enjoyed figuring out what happened alongside Mei and there were a few twists I definitely didn’t see coming. I enjoyed seeing Mei develop in this book. I like her as a main character and I could relate to her as I’ve been through some things she deals with as well. I also liked how the romance was handled, Yasahiro and Mei are now a couple and have some things they have to deal with together and I loved seeing their relationship dynamic change and develop. I love them together and think they make a great couple. All in all this was an amazing book and I wish the next book was already released!

Do you like it when in books you see the romance continue beyond the point when they become a couple?

16 responses to “Review: The Daydreamer Detective Braves the Winter by SJ Pajonas”