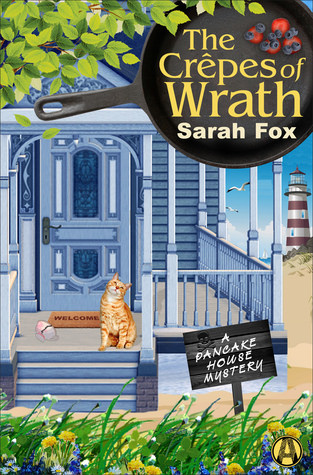 Blurb:
In the debut of a delightful cozy mystery series, Sarah Fox introduces a charming new heroine who finds herself in a sticky situation: stacking pancakes, pouring coffee, and investigating murder.

When Marley McKinney’s aging cousin, Jimmy, is hospitalized with pneumonia, she agrees to help run his pancake house while he recovers. With its rustic interior and syrupy scent, the Flip Side Pancake House is just as she pictured it—and the surly chef is a wizard with crêpes. Marley expects to spend a leisurely week or two in Wildwood Cove, the quaint, coastal community where she used to spend her summers, but then Cousin Jimmy is found murdered, sprawled on the rocks beneath a nearby cliff.

After she stumbles across evidence of stolen goods in Jimmy’s workshop, Marley is determined to find out what’s really going on in the not-so-quiet town of Wildwood Cove. With help from her childhood crush and her adopted cat, Flapjack, Marley sinks her teeth into the investigation. But if she’s not careful, she’s going to get burned by a killer who’s only interested in serving up trouble.

The Crepes of Wrath is a fun cozy mystery set in a seaside town where the main character temporarily works in a pancake house. The set-up was fun and I think the setting with the seaside town and the pancake house was what really made the book shine for me. There’s lot of scenes involving the beach and the pancake house and I thought both gave something original and fun to this cozy mystery. And all the descriptions of delicious pancakes and crepes sure had me craving pancakes while reading this.

However for some reason something kept me from fully enjoying this book as much as I would’ve liked. Maybe it’s because I just finished a really good cozy mystery before this one? Or maybe it was because I never fully cared about the characters or side characters? Or maybe it’s just one of those books you don’t enjoy as much as you would like and can’t put your finger on the way. While I enjoyed reading this one, I never fully got into the story. Again not sure why, it was a fun read, but something prevented me from really enjoying it.

The mystery aspect somehow fell a bit flat for me. The murder victim is the main character her cousin, so that’s the reason she gets involved. Maybe involved isn’t even the right word as mostly what she does is ask some questions, then again the police seemed to not get anywhere themselves, so it was good she helped. Although the police were nice and helpful in this book, it just felt like the main character came up with the big clues which made me wonder what the police were doing. The mystery had some interesting twists and turns towards the end, although the murderer didn’t come as a too big of a surprise either. And at first the mystery seemed to progress a bit slowly. I guess the reason for the murder just bothered me a bit, it seemed so silly and a few things surrounding the murder didn’t really fully add up in my opinion. Some why questions remained that I would’ve like seeing answered.

One of the main problems I had with this book was the big amount of side characters and for some reason I had a lot of trouble remembering who was who. I just didn’t seem to be able to attach much of a personality to any of them and they just turned into a big mash of names. Which made it difficult at times to keep the plot straight. Maybe that’s just me, but I would’ve liked to get to know the side characters a bit more so it would’ve been easier to remember who was who. My favorite side character would’ve been Ivan as he did seem to have some personality and I thought he was interesting.

To summarize: This was a fun cozy mystery with a great setting. Although I wasn’t able to enjoy it as much as I hoped. I really liked the focus on the small beach town and the pancake house was great too and all the pancake mentions made me crave pancakes. The mystery felt a bit off somehow, but there were some nice twists. I just would’ve liked to see a few open question get answered as well. The main character was likeable enough and although I never fully felt like I got to know her. There were a lot of side characters and I had some trouble remembering who was who and I would’ve liked it they had a bit more personality. Overall a fun read and I will be interested to see how the series continues.

What’s the last book that made you crave a certain food?

16 responses to “Review: The Crêpes of Wrath by Sarah Fox”