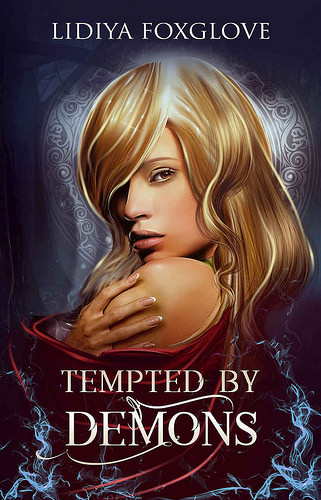 Tempted by Demons
by Lidiya Foxglove

Blurb:
I thought I was signing up for a luxury retreat on a lonely, windswept island. I didn’t realize that I would be the only guest of three sexy demons hungering for a mate…

Social media addict Edie can’t remember the last time she spent time in the sun or hung out with anyone but her geeky roommates. The curated life of her feed is so much better than reality. But after getting trolled by an online creep, she’s determined to detox. Her summer vacation spot has no phone service or internet–just ocean views and the old-fashioned charm of Marchcliff Manor–plus, three smoking hot guys that weren’t listed on the brochure.

Scholarly Alistor, rugged Van, brooding Dante: ferociously protective demons who can take monstrous forms and offer unimaginable pleasures…with a catch. They’re cursed, forever bound to the island unless they can find a bride strong enough to handle more than her fair share of sexy supernatural men and surrender her human life.

Well, the love of three demons might be just the thing to distract a girl from the internet, and the ferry won’t return for two weeks. Edie will have to decide…is a human life worth keeping if you barely had one to begin with?

Tempted by Demons is a standalone reverse harem romance with plenty of steam on the way to happily ever after.

Tempted by Demons is a standalone paranormal romance, although I do hope the author will turn it into a series as I had a lot of fun reading this book. I am a big fan of this authors Guardians of Sky and Shadow series and I was both excited and a bit hesitant to start this book. Tempted by Demons was a fun read, it’s fast paced with the focus on the romance and not as much drama as her other series, but it’s just a lot of fun and I enjoyed the time spent with this book.

This book follows the story of Edie, who is addicted to social media. When an internet troll’s comment really gets to her she decides she needs a break and that’s when she books a two week trip to Marchcliff Manor where there is no internet. Marchcliff Manor and the island it’s on is run by three demons, who are looking for a bride as else the island will disappear from this world forever.

I got pulled in this story right away, Edie is a pretty relatable main characters and her behavior felt pretty realistic. She liked social media and has a blog and vlog and maybe she does spend a bit too much time on it, but that never felt like such a problem until now, when she realizes how much she is missing and hiding. Things progress quite quickly, but even with the pretty fast pace I liked how we quickly get a good feel for most of the side characters we meet. The focus is mostly on Edie and the three men, but there are a few side character, like Edie’s two friends that play a part as well.

When Edie arrives on the island it was fun to see her struggle to live in the moment and act without posting everything on social media and I liked how the author illustrated this struggle a bit and also showed what she did gain and enjoy now that she wasn’t on social media all the time. I also liked how she struggled a bit at first about the decision she had to make, but then later she seem to make the decision quite suddenly.

I did feel that at times the pace was a tad rushed, a few things didn’t get properly resolved and I would’ve liked a bit more explanation or fleshing out in some scenes. I think the book could’ve benefited from a few extra chapters, but for the most part I didn’t mind the fast pace isn’t a problem and the pace fits the story. I was left with a few questions at the end regarding what happened to Edie’s job and I wish we could’ve read the scene where she introduced the guys to her family.

Just like the rest of the book the romance progressed quite quickly as well. There isn’t much build-up and their attraction is instantly and things heat up pretty quickly. I did think the romance was well done. The author manages to give a good feel for each of the three men the moment we first met them and I never was confused about who was who as they each have their own personality and appearance. I liked how Edie had some scenes with each of the guys and how she got to know them a bit.

I liked how the Reverse Harem aspect was handled, there was a paranormal explanation for why the three demons were bonded and they had to find one bride, which is pretty normal for demons. They also communicated this pretty early on toward Edie so she knew what she was getting into. I liked how open and honest they were with her, they tell her that they are demons and the he whole deal with the island and how they are bonded pretty early on, which was great.

One of the reasons why I was a bit hesitant before starting this book was the fact that it’s about demons. I am usually not a fan of stories that deal with (the biblical version) of demons and angels, so I wasn’t sure if that part of the book would work for me. I am happy to say that these demons are a bit different from most demons. They have elemental powers and they have horns, but aren’t inherently evil or connected to hell or anything. And while there were some parallels, the way things were worked out here worked for me. It was more two different sides of paranormal creatures than angels and demons as how we usually see them.

The world building was interesting and well done, but I did think the world building could’ve been expanded a bit more, but we do get answers to the most obvious question. And as I mentioned before the men tell Edie everything pretty quickly, so the reader isn’t being kept in the dark because they don’t tell the main character anything. I liked how the author painted the world, I guess I just wanted even more so it would feel more alive in my head. I liked how the world pretty had some original and unique elements, like the whole thing with the island and the other spots the demons protect. Another reason why I hope this turns into a series, so we can see more of the world.

To summarize: this was a fun, fast paced paranormal romance Reverse Harem story. I liked following the story of social media addict Edie and how on her vacation she meets 3 demons who run the house and island and falls for them. The pace is pretty fast, but only feels a bit rushed in places, for the most part the pace works well. The author does a good job giving the reader a feel for Edie and the three men their personalities. Things do progress and heat up pretty quickly, but it worked here. The Reverse Harem aspect was handled well and believable with how it was explained and the demons were upfront with Edie about it. If you’re looking for a fun, steamy standalone Reverse harem book, I would definitely recommend this one.

Do you like standalone? What’s the last standalone book you read?

4 responses to “Review: Tempted by Demons by Lidiya Foxglove”