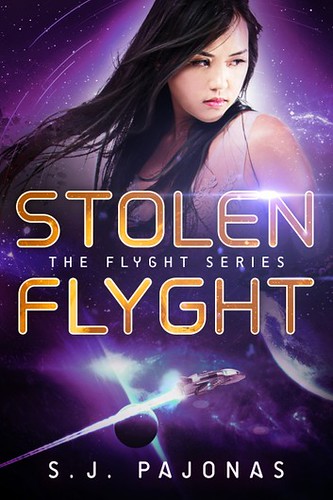 Blurb:
One last mission to secure her birthright. A frozen world and a sinister conspiracy that may cost her land… and her life.

Vivian will do whatever it takes to finally be victorious in the battle for her family farm. So when her benefactor insists she infiltrate a hostile military base on a treacherous ice planet, she has no choice but to agree. But when two of her crew are apprehended during the operation, her focus shifts to desperate survival.

Outmanned and pinned behind enemy lines, Vivian’s options for escape dwindle. But everything she believes in turns on its head when she makes a shocking discovery in the base’s top-secret lab.

Can Vivian and her team evade a deadly trap to win back her legacy?

I think Stolen Flygth is probably the best book in the series. This was such an awesome ending to the series. There is so much going and it’s also a great wrap up of the main storylines. And the last 2 chapters made me emotional, it was such an amazing ending and the epilogue was great. It’s so nice seeing a glimpse of Vivian’s future. I am really sad this series is over now as I really love it. I think this might be Pajonas best series yet. I am excited that Skylar is getting her own series, so that will be more time spend in this universe and there are some plot lines that still feel like they could go further so hopefully we see more of that.

This last book in the series has so much going on. Vivian and her crew go on a big mission in this book and it takes up a big part of the story. And also ties back into some things that happened in previous books. And there is so much excitement, action and danger. Along with some big reveals and exciting twists and turns. I really liked where the plot went in this book. There’s also a nice twist that hints at how this series as well as the Nogiku and Hikoboshi series all take place in the world. Which is really cool.

It’s also interesting how it’s hard to know for sure who is the bad guy or not as people change and there are definitely some characters that make some unexpected changes, but I like how realistic this feels. As it’s not always as clear cut. It’s interesting seeing how some characters really are more than they seem and others are more of threat then it seemed at first. It definitely isn’t predictable.

Vivian started off as depressed and not sure of herself in this book, which was tough to see, but she really grows a lot throughout this book. I liked how she finally healed herself into one Vivian, although it almost felt too easy after how broken she has been for the past few books. She turns into a great women and I liked seeing her really take the captain/ leader role in this book. It was great to see her act that way and how she handled everything that came her way. And I liked how her shoes and the farm are both part of the start and the ending of this series. It was such a nice touch to bring the series back to where it started in a way.

I love the romance in this series and now that Vivian’s network is almost complete we get to see a lot of them working together, which I loved. They really are all there for Vivian and one of the best parts was also seeing how all the guys grow close to one another as well. I really liked seeing how they all interact together and they make for a great family. I hope we’ll still see glimpses of them in Skylar’s series to see how they’re doing. I just wish we got to see more of Mat as they only met him in the previous book I felt like he didn’t get as much page time as the rest of the guys, which ofcourse makes sense. I really like what we see of him and how he fits into the network. And I like this type of progression for reverse harem books where the female adds guys to her harem as it feels more natural to me. I loved reading more about all the guys and seeing how they work together and how they grow closer.

To summarize: I loved how this book wrapped up the series. It’s such an amazing book, filled with action, conspiracies, twists and turns and big reveals that have the power to change everything. There’s still so much going on here that I almost wondered how the author was going to end the series here, but she did and in a great way too. The last few chapters were awesome and even got me a bit emotional to see it all get wrapped up. The ending was awesome. Vivian is an awesome main character and I really liked who she became in this book when she really steps into her role as captain/ leader. Her network of men is amazing and they are all so good to her. I also liked how close they become to one another and work together. I really enjoyed this series and I am so happy the author will be writing a series about Skylar so I don’t have to say goodbye to this awesome world yet. If you love a good sci-fi romance series, I can’t recommend this series (and the author’s other series) enough!

Tell me about the most recent series you finished? Was it a good series ender?