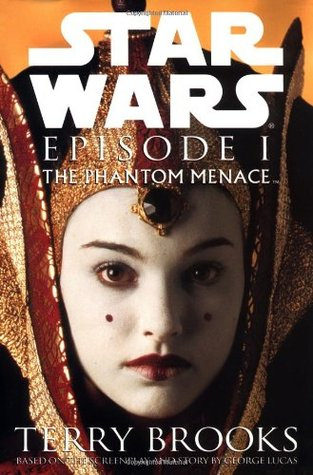 Blurb:
In barren desert lands and seedy spaceports…in vast underwater cities and in the blackest depths of space…unfolds a tale of good and evil, of myth and magic, of innocence and power. At last the saga that captured the imagination of millions turns back in time to reveal its cloaked origins—the start of a legend—the story of Star Wars. Based on the screenplay by George Lucas, this novel by master storyteller Terry Brooks probes the depths of one of the greatest tales of our time, providing rich detail and insight into the minds and motives of the characters—and shedding bold new light on Lucas’s brilliant creation.

A long time ago in a galaxy far, far away, an evil legacy long believed dead is stirring. Even the Jedi are caught by surprise, their attentions focused on the political unrest between the Trade Federation and the Republic. Now the dark side of the Force threatens to overwhelm the light, and only an ancient Jedi prophecy stands between hope and doom for the entire galaxy.

On the desert world of Tatooine, far from the concerns of the Republic, a slave boy works by day and dreams by night—of being a Jedi Knight and one day traveling the stars to worlds he’s only heard of in stories…of finding a way to win freedom from enslavement for himself and his beloved mother. His only hope lies in his extraordinary instincts and his strange gift for understanding the “rightness” of things, talents that allow him to be one of the best Podracers on the planet.

My Review:
After seeing the Star Wars movies for the first time last year I decided I wanted to read the books of the prequel series as well and bought the omnibus edition with the three prequel books. I finally got around to reading the first book and it’s a great way to revisit the story and experience it in a different way. I think this is the first time I read a book after I’ve seen the movie. It was an interesting experience, instead of visualizing the characters myself I saw the actors and landscapes from the movie and saw everything play out in my mind very vividly.

This book follows the story from the movie pretty closely, but there are some extra scenes and tidbits of insight and information that are missing in the movie. I also though that in book form the story was a bit easier to follow than in movie, but that might be my personal preference for reading stories over watching movies. There are some scenes where we see Darth Sidious set up his plot and communicate with the trade federation about the blockade. We see Annakin participate in a pod race before he meets Qui-Gon and Obi-Wan and I felt like we got a better feel for his life as a slave. There is also a bit more depth in the characters, like why Qui-Gon decides to help Annakin and Jar Jar and what Obi-Wan thinks of that. There are also a few explanations of how the Jedi order and how the Sith came to be that aren’t in the movies. So the book manages to add a few tidbits to make it worth the read.

One of the issues I had is with Terry Brooks his writing style. His writing style is telling and descriptive and even a bit distant and dry at times. After a few chapters I did got used to his writing style. The lightsaber fight scenes are a lot better in the movie, Terry Brooks didn’t manage to capture the feel of those battles. I did think he did a great job with the podracer scenes capturing the excitement of the races.

I do wonder if this book would be the same if you read it before the movie There are some descriptions and I think the author did a good job with the world and character descriptions, but my knowledge and memories of the movie filled in a lot of details. On the other hand the explanations and the flow of the story was done very well, so I don’t think a reader would be lost reading the books first.

I enjoyed seeing the familiar characters again and seeing the story play out again. It’s great to revisit the star wars universe in this way and to experience the story in a different way. I really enjoyed seeing the dynamics between all the characters. I liked seeing the different facets of Annakin’s personality already here, we see his dreams, his love for flying and podracing, his determination, but there’s also a scene showing his temper that I don’t remember was in the movie. There are also some clumsy Jar Jar scenes that made me smile that are in the movie as well. I also thought it was interesting to see yoda his reluctance to allow Annakin into the Jedi order and how he didn’t agree with the council, I didn’t remember that scene as well from the movie. There is a bit more foreshadowing and hints about Darth Sidious his plans in this book already, while I felt that is given less attention in the movies, we get a few chapters from his point of view and the trade federation so we see their side too.The author captured the essence of the story very well and made it all feel familiar and new at the same time.

To summarize: I really enjoyed this book. The extra tidbits and scenes that aren’t in the movie were a real joy and it’s fun to experience a familiar story in a different way. I really liked reading this story and thought the plot was easier to follow than in the movie. The light saber scenes are better in the movie though, but I did think the author did the pod racer scenes well. I liked seeing all the familiar characters again and seeing the story unfold, there is some more foreshadowing as in the movies and I felt like the book did add enough to make it worth the read. The author managed to keep the story familiar and add some new aspects, if you want to experience the star wars stories again, but slightly different I would recommend you give the books a try.

Have you ever read a book based on a movie and how did you experience it?