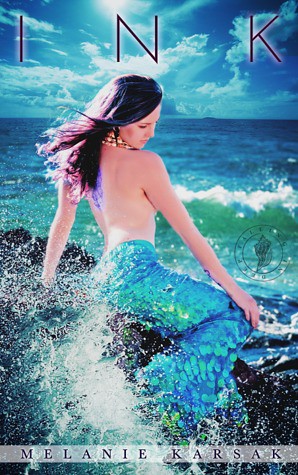 Burb:
A mermaid princess destined to wed a handsome king…

It sounds like a fairy tale, but the reality is far murkier.

Ink, Princess of the Florida Atlantic mers, is slated to wed the ancient enemy of her tribe, the King of the Gulfs. After years of war that led to countless mer deaths, as well as the genocide of aquatic shapeshifters and the freshwater mers of Florida, Ink’s marriage will bring lasting peace.

Or so it seems.

Mere hours before she’s supposed to leave the ocean for her customary year as a drywalker, Ink meets Hal, an alligator shifter who warns her that a storm is brewing. There is malicious intent behind Ink’s marriage—and worse, meeting Hal has also caused a storm to rage in Ink’s heart. Nevertheless, loyal to her tribe, Ink will put aside her feelings and journey to Miami to marry the decadent King Manx.

Ink soon learns that her only hope of surviving the crashing force swelling around her is to tap into a power deep inside—a forbidden power that might destroy them all.

My Review:
I read Ink as part of the Falling in Deep box set. I really enjoyed Ink and I like how the author manages to tell a whole story in such a short novella. On the other hand I do think the title is a bit misleading as it’s about so much more than the romance, in fact the romance was my least favourite part of the book.

Ink tells the story about mermaid princess Ink who get’s intertwined in a dangerous plot, forced to marry a guy she doesn’t want to marry she gradually finds out not everything is what it seems and there are things going on she didn’t knew about. Slowly things get revealed and we see the story play out. This book was very well written and I liked the pace, things kept happening and the book kept my attention. There were a few scenes, especially the ending that felt a little bit rushed, like there was more potential for a longer scene.

Ink is a great main character, she knows when not to fight a decision and when to go follow her dreams. She knows what she believes in and doesn’t do things she doesn’t want to if she can avoid it. I felt sorry for Ink with how she had to on land and marry a guy she didn’t want to marry, but she took it all with dignity and kept her eyes and ears open. She seems like a compassionate and caring person with how she rescued an alligator shifter at the beginning of the book and how she genuinely seemed to care about her fellow mermaids, no matter where they lived. She made for a great main character, although the side character got less attention, it still worked.

The romance is probably my least favourite part of the book, Ink meet an alligator shifter and falls in love about the moment she sees him and they go a lot further than just friend the second time they meet. It just seemed to move too fast and they hardly knew each other and already were in love. It just went a bit too fast to my liking. I also felt like there was much more focus on the story and the plot. The romance was more of a sideplot.

The author sketched a very interesting image of the underwater world. There are different kind of mer’s and they have their own territory and then there are mer’s who can shift into aquatic animals like dolphins, but also those who can walk on land as drywalkers. There are also humans who can shift into aquatic animals. I thought it was very interesting and my only complaint is that we don’t learn more about it. It also was a bit confusing with all the different terms, as the human shifters who could shift into alligators had a specific name and all the other human shapeshifters too, I thought it would’ve made more sense if the author picked more easy to remember names like alligator shifter. I did got used to the terms after a while though, but it was a bit confusing at first.

To summarize: Ink was a fun and exciting book, the plot was well done and a lot happens during the course of the book. The ending felt a bit rushed, but overall I enjoyed the story and it kept my attention. Ink was a great main character, but I got less of a feel for the side characters. I also thought the romance fell a bit flat, it all happened too fast and was a bit too insta love like. The world building is very interesting and I liked learning about the humans and mer’s and how some could shifts into animals. It could be a bit confusing at times with all the different terms for the shifters that were used, but I did get used to it after awhile. I wish we had seen more of the world as it was very interesting.

Which paranormal creature would you like to see more books written about?