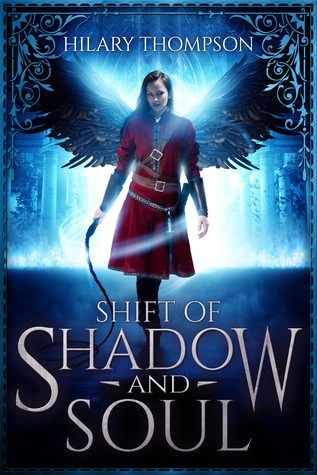 Shift of Shadow and Soul (SoulShifter #1)
by Hilary Thompson

Blurb:
There are three kinds of magic in the world, and Corentine has the wrong one.

Long ago, the Restless King forced Corentine’s people into hiding as he scoured their blood for the SoulShifter. When Corentine learns she possesses some of the forbidden Shifter magic, she must hide her power or risk the same death her twin suffered.

Raised to trust no-one, she rejects the General’s son Sy, until she realizes his family secrets might be the key to unlocking hers. When his brother turns against them, they are forced to fight family to save what’s left of their home, or accept banishment to find a new future.

If Coren and Sy can’t convince their people to accept the light of Shifter magic, the growing Shadow will ruin everyone’s chance of freedom.

Travel this richly imagined world with a diverse cast that readers have compared to fantasy favorites like Sarah J Maas and Leigh Bardugo.

Sulit Witch
Weshen Shifter
Umbren Shadow
When dark meets light, will all become Shadow?
Buy Shift of Shadow and Soul today to find out which magic will win!

My Review:
After I read a short story from this author that was part of the series in the anthology Marked by Fate Origins I knew I wanted to read the rest of the series. I eventually bought a copy of Shift of Shadow and Soul and it didn’t take long before I started reading it. I have to admit I read very little straight up fantasy like this and usually stick with paranormal romances or urban fantasy. But I was in the mood for a good fantasy read and this book fit my mood exactly.

Shift of Shadow and Soul tells the tale of a fantasy world with different cultures/ races where a king named The Restless King made a grab for power. To protect themselves the Weshen sacrificed their magic to make the mountain range that shield their city uncrossable. They separated their males and females and only mate for heirs. They hope that one day the magic and love will return their people and with it a chance to stand up against the Restless King.

Corinne hasn’t had an easy life, her mother is dead, her father is absent and she has to care for her two younger siblings. She could come across as wary and a bit harsh at first, learned to trust no one and only rely on herself. She could be quite fierce too, willing to fight for what she believed in. I liked Corinne, even more as the story progressed. but while she was a nice character I also got annoyed sometimes by some of her behaviors, but it did fit her character and felt in character.

From the two main character Sy was my favorite. I always like those character who have grown up privileged and don’t have to fight for what they know is right, but choose to do so. He chooses to stand by Corinne and fight for what he believes in instead of picking the easy road and I admired that about him. I also liked how he believed in magic and love and wanted that for himself and his people.

The side characters are interesting as well, I liked how Resh had such a different view of things than his brother, but I got why he thought that way and it made sense as much as Sy’s point of view. The glimpses we get of other characters round out the story and give us a bit more information about what’s going on.

This book is filled with great characters, magic, a well paced story, a bit of action and a hint of romance. An issue I sometimes have with fantasy books is when they aren’t character focused enough, but I feel that Hilary did a great job making her character interesting and giving them enough depth to care about them. Even though at times I wouldn’t have minded a bit more character depth, I think she found a good balance between the different elements in this book. There also a fun twist later in the book, taking some characters in a direction I hadn’t expected.

It was a bit difficult to get a good grip of the world at first, but slowly I began to understand more. It helps that the scope of the book is a bit narrow at first, with most of the start of the book taking place on one island and the focus on the Weshen. And as the book progressed we discover more of the world and understand more of the magic. A few minor things were a tad confusing, but most of that is because the focus is on Corentine and Sy and their knowledge of things is limited as well.

I thought the Weshen shifter magic was quite cool. At first I thought it was shapeshifting, but it’s actually something much different, although there is some shapeshifting involved too. It made sense how these different things all fell under the same magic and it was great to see what the characters could do with the magic.

To summarize: I picked this book up after I read a short story in the series that I enjoyed. Shift of Shadow and Soul was a great fantasy read. There are different types of magic, adventure, great characters, some action and a hint of romance. I liked Corentine who didn’t have an easy life, but she fights for what she believes in. But Sy was my favorite from the two main character with how he came from a more privileged life, but choose to walk the hard path because he believed it was the right thing to do. I liked both characters and liked we got to know them and some of the side characters. And I liked the bit of romance that we got. The world building was well done, although I wanted to know about some things, we got little knowledge about so far. The Weshen magic seemed well thought out. I really enjoyed this book and hope to pick up book 2 soon. I would recommend it if you’re looking for a good fantasy novel!

12 responses to “Review: Shift of Soul and Shadow by Hilary Thompson”