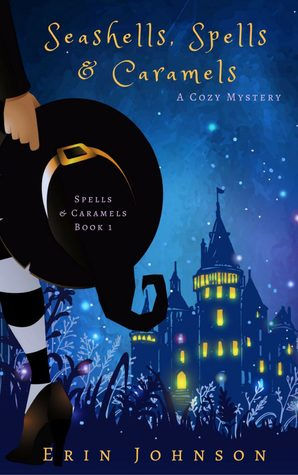 Blurb:
Imogen’s spent her twenties in Seattle, saving every penny and missing every party, to follow her dream of opening her own bakery.

When that dream goes up in flames, she accepts a spot in a mysterious baking contest—one she doesn’t remember entering. She travels to a bustling, medieval village off the coast of France and discovers an enchanting world of magic and mystery, and learns that she, too, possesses powers.

Unable to so much as cast a spell, Imogen struggles to keep up with the other witches and wizards who have come from all over the magical world to the Water Kingdom’s big competition. She juggles relationships with a sweet new friend, a snarky baking fire, and a brooding, handsome baker. As Imogen falls for this bewitching world, she fears she won’t master her magic in time to win the job of Royal Head Baker, and will be forced to return to the shambles of her non magical life.

It only gets worse, when a competitor drops dead in the middle of the big white baking tent, and Imogen’s the prime suspect. Now, she’ll not only have to survive the vampire and psychic judges, but also clear her name by finding the real murderer, before they strike again.
With a killer on the loose, a missing prince, and the Summer Solstice Festival fast approaching, Imogen will have to bake like her life depends on it- because it just might.

My Review:
When I first heard of this book I knew I had to read it. It just sounded like exactly the type of read I would enjoy. I actually bought the first 3 books in the series before I even picked up book 1 as I was that sure I would enjoy this series. Now that I read the first book I am happy I already have book 2 and 3 waiting for me to read them.

This book was so much fun! I really enjoyed the book and I just wanted to keep reading. It is well written and the pacing worked well. The blend between paranormal aspects and mystery worked really well here.

Seashells, Spells & Caramels follows the story of Imogen. Imogen has a normal 9 to 5 job, but she’s saving up so she can one day start her own bakery. I quickly grew to like Imogen, she was such a nice character and I liked how she worked hard to achieve her dreams and I could understand her frustrations and sadness when that all went up in flames.

I think this is only the second paranormal cozy mystery that I read and it’s very different from the other paranormal cozy mystery series I read. This series is filled with magic. It has a slight Harry Potter feel, with how Imogen is a normal girl learning of magic and is introduced to a magical world hiding among our own world. The paranormal aspect was well done, although I did feel like what we learned about magic is still a bit limited. But that does make sense as Imogen is so new to everything. I loved discovering this new world with her and being as surprised as Imogen to see what was possible and what not. I really liked the talking flames.

The mystery is a bit slow to start, with only around 50% of the book the murder investigation really starts in earnest. But I felt like that totally worked here. Imogen had to find her way to the magical city and find her place a bit first. The mystery was well done, there were multiple suspects and I didn’t guess who the murderer was. It was a nice twist and it did make sense in the end when things fell on it’s place. Although I did predict several other twists, as some of the hints for those could be quite obvious to the reader if not to Imogen.

I liked getting to know Imogen throughout the book. I liked her and her love for baking, how she was a nice person and how she made mistakes, but kept trying to do better. I liked seeing how she adapted and found her way in this magical world and I liked how human she was compared to the magical other beings and how her human knowledge was of use at times.

There is a big cast of side characters as a big part of the plot centers around a baking competition and we get to meet the other competitors. At first I was totally overwhelmed when the other bakers were introduced as I couldn’t keep them apart, but as the book progresses we get to know everyone better and it quickly got easier to keep them apart as they all had their own characteristics. The whole baking competition was fun to read about. There are some great descriptions of all the delicious food that they are making.

To summarize: this book was so much fun! Filled with magic, a relatable main character discovering a whole new world, magic, a hint of romance and a fun cast of side characters this book was a great read from start to finish. The paranormal aspect is very front and center in this book and that totally worked here. I loved discovering this new magical community and learning how magic worked. The mystery was well done. Although it didn’t fully start until later in the book, but that worked her. I hadn’t guessed the who the murderer was, although I had predicted a few other twists. Imogen was a likeable character and the side characters were interesting too and all had their own personality, even though at first the large cast of characters was a tad overwhelming. I had a lot of fun reading this book and really enjoyed it. I loved imagining this magical city and reading about the delicious things they baked. I hope to get around to reading book 2 soon as I am already looking forward to returning to this world!

What’s the most recent book you read that was a lot of fun?