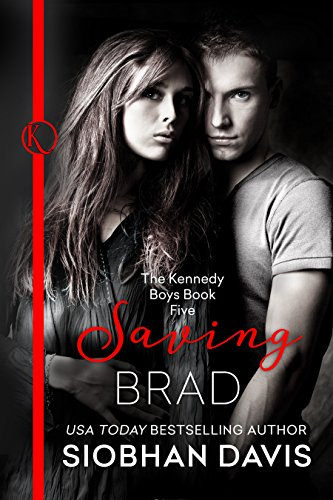 Blurb:
An enemies-to-lovers romance from USA Today bestselling author Siobhan Davis. Standalone with an HEA and no cliff-hanger.

Brad
I’m in love with my best friend’s girl.
She knows it. He knows it. Everyone knows it.
Faye will never be mine, but try telling that to my stupid heart.
An endless rotation of girls streams in and out of my bedroom in a desperate attempt to forget her, but nothing eases the horrid ache in my chest. Rejection isn’t anything new for me, but it hasn’t gotten any easier.
Until she reappears in my life. Like an out-of-control tornado. Storming in, all fierce and angry, ready to steamroll everything in her path. Rachel is trouble with a capital T bundled in a gorgeous, sexy, Irish package.
She pushes all the wrong buttons, and I can’t decide if I want to yell at her or kiss her.
I should steer clear.
But I’ve never been very good at taking my own advice. Especially when it comes to girls I can’t have and shouldn’t want.

Rachel
I need to escape.
To put as much distance between me and that monster so I can start living my life.
Yet, even the vast Atlantic Ocean isn’t enough to sever the connection. To allow me to forget how he’s ruined me. His hold is more than just physical. He has a vise grip on my head and my heart, and I can’t breathe, can’t think, can’t function.
So, I do everything to blot it out.
Until he reappears in my life.
Brad McConaughey. So hot. So infuriating. So in love with my best friend.
Every word out of Brad’s mouth makes me want to throat punch him or kick him in the nuts.
But he makes me feel, and I hate him for it. A part of me might actually love him for it.
I should keep my distance, but like destructive magnets, we are drawn together.
This isn’t going to end well.
I know it. He knows it.
But we’re powerless to resist.

I was excited and a bit hesitant to start reading Saving Brad. Brad always was one of my favorite characters in this series, but I didn’t really like the turn his personality took in the later books. Then there was the whole enemies to lovers trope, which is a trope that usually doesn’t work for me. So I wasn’t sure what I would think of this book. I am happy to say that overall I really enjoyed it, although the second half was much better than the first half in my opinion.

Saving Brad is Brad’s story. Brad is the losing side of a love triangle and he is going through a difficult time. I didn’t like how he turned from such a sweet and kind person into a bit of a jerk who was nasty to others and slept around with lost of different girls. It just felt so out of character, but it was obvious he was hurting and didn’t know how to deal with it. I really had trouble liking his character in the first half of the book, but in the second half things changed and we see more of his kindness and I was so happy about that. I liked Rachel more, but she could be quite bitchy at the start, later she drops a bit of her tough girl armor and we get to see more of her soft side.

The first half of this book is more the enemies part of this enemies to lovers romance and I had a bit trouble with that part at times. The whole enemies to lovers trope rarely works for me and Rachel and Brad really got on my nerves in the first half of this book. They had had attitude in spades and could be so nasty to each other, hurting each other and then the next moment sleeping with each other. Luckily around the halfway mark things turned around and from then onward I really started to enjoy the book.

Brad and Rachel are so good to each other once they get over their pretend hate and drop their nasty attitude. These two find each other during some of their darker moments. It’s great to see how they bring light back to each other’s lives and help pull each other out of that dark place. And I like how believable Siobhan wrote their romance. In the last half of the book there are some very sweet and touching scenes between these two where I could really feel their romance. And the epilogue was great!

While all the books in these series deal with some tough topics, this book is a bit darker than most of them so far. There are some really sad and difficult to read parts and I felt so bad for Rachel. My guess about what happened to her was pretty close and I almost wished I had guessed wrong as its so bad what happened to her. It did got resolved well toward the end and it also felt realistic how that part was written.

We get to see quite a lot of Faye and Kyler as well in this book, which was fun. It was great to see how close Rachel and Faye were and seeing Faye and Kyler again, even though it was from another point of view. Although I wans’t 100% happy with how the feelings Brad had for Faye got resolved in this book as it felt a bit off. We also get to see quite a bit of Keven and I feel like we got to know him a bit better here as well. At the end there is a nice hint for Kaden’s story and now I am quite curious what’s going on with him.

To summarize: Saving Brad was a great read! I got off on the wrong foot with this book as I didn’t like the whole enemies part at the start of their romance and how mean these two could be at times, but around the halfway mark things turned around and the book got so much better. I really liked their romance in the second half and how sweet and touching it was. It definitely convinced me these two are great for each other. I like how these two managed to pull each other out of a bad place they were in and how they move toward healing. Saving Brad deals with some tough topics and gets a bit dark at times, but there are some great uplifting moment as well. It also was fun to see Faye and Kyler again and we get to know Keven a little bit better and there’s a hint about Kaden’s story toward the end. All in all this was a great addition to the series even though I had a bit of trouble with the first half, the second half was really good.

What’s the last book you read that got better the further you read?