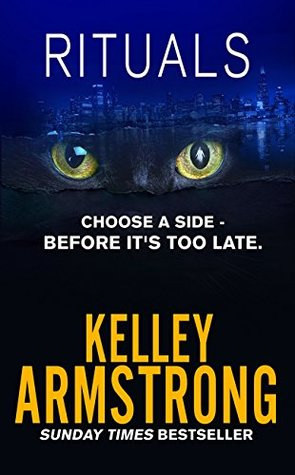 Caught between two rival supernatural forces, Liv has been given a brief period in which to make her decision. Now that time has run out.

Whichever side she chooses, someone she loves will pay. Her lover, Ricky. Gabriel Walsh – the man she knows she cannot, must not love. Her parents – already trapped in prison.

And now there is a new, terrifying power rising – one that doesn’t distinguish between good and evil intentions. It feeds on chaos and destroys without mercy. Unless Liv acts fast, no one will survive.

My Review:
My review might contain some mild spoilers for this book and earlier books in this series.

Rituals was one of my most anticipated releases of this year and once my copy arrived it didn’t take me long to start reading. Rituals is not only the last book in the series, but something that happens at the end of book 4 had me curious how things would play out here. The start of the book felt a tad slow with a scene I didn’t see the relevance of yet, but once things start rolling I really enjoyed this book. As I am used to from Armstrong’s books it was very well written and it it was a great read.

On the one hand Rituals was a great ending to this series, I mostly liked how it ended, even though it had some sad parts and I thought the choice was a bit predictable. But it was a good resolution to the series and wrapped up most of the main plot lines, while leaving a few things open to explore more if the author wants to. On the other hand though I thought it was so completely different than I had what expected. Which is both good and bad, good because I always like it when things take an unexpected turn. And bad because it felt a bit off. I had expected things in this book to go a certain way, focus on certain things, but it totally didn’t.

Rituals wraps up a lot of things well, but at the same time it felt like it took a turn into a different direction from the previous books. A new big baddy gets plucked out of nowhere and a big part of the book focuses on that with a big show off at the end. And while it felt that way at the same time it’s not totally fair to say that as it did feel like the author had planned something like this from the start as there were things that lined up nicely and made sense with the appearance of this new enemy. But on the other hand I was a bit annoyed as I wanted to read about the fae and the choice and not about this new big enemy. I also didn’t really like the enemy, they were a bit too evil and I liked the whole shades of grey part of this series where the fae are not fully good or evil, but somewhere in between. At least with this new enemy it was easy to root for it’s demise.

While I had some small issues with the book, overall it’s just as good as the previous books in the series. It has a good plot, some mystery, some twists, we get to see more of familiar characters, meet a few new characters and see the romance develop. I wanted to keep reading and the writing flows so well. My favorite part of this book are probably the awesome characters and there are some awesome character related scenes in this book.

Then there is the romance. This book is an important change in that and I loved seeing Gabriel finally get his turn and at the same time I think I enjoyed the four book build-up more than seeing them actually together. Although there was a nice sex scene too. And there was a fun scene afterwards. They are great together and I liked seeing them together and how they dealt with this change in their relationship.

I also liked seeing how mature Gabriel and Ricky dealt with the whole sort of love triangle thing. There never really is a big competition or a lot of jealously and they handled it very well. And seeing how well Ricky handled it made me even more sad actually and I even hoped she might end up choosing both as there is some great character interaction between these three. I think how things got resolved at the end worked well.

Throughout this whole series there has been the plot line about how Liv, Gabriel and Ricky are sort of the re-incarnated versions of three important fae and Liv has to choose one of them and one of the fae which gives them some extra power. So in this book that would finally come to the conclusion. But there is in fact very little focus on it. I would’ve liked to see a bit more of that and get more answers about the fae. I thought this plot line was resolved well, even though I suspected this would be what she would choose.

To summarize: Rituals is a great ending to this series. It wraps up most important plot lines, but it takes a very different direction than I expected. There a new enemy that gets introduced and less focus on the fae and the choice than I expected. I thought the choice she made at the end was a bit predictable, but I did like how things got resolves. The romance takes a different turn in this book and it was great seeing Gabriel get his turn now. The sort of love triangle gets resolved very maturely and I liked how both sides dealt with it well. I really like the characters in this series and I enjoyed spending time with them and seeing more of them in this book. It was a great read, the writing flowed well and I am sad to say goodbye to this series as I really enjoyed it.