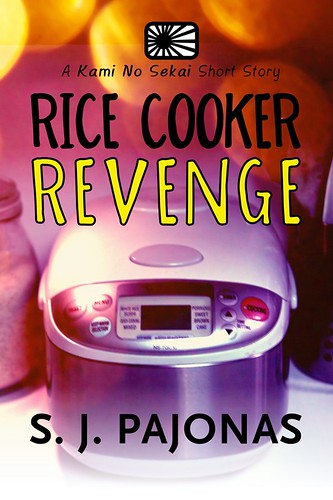 Blurb:
It sits there on the counter, quiet and contemplative. Who knew rice cookers could be so vengeful?

Ryu must decide whether to stay or leave The Chef’s kitchen, so he turns to an unlikely ally for help.

SJ Pajonas is one of my favourite authors and when I got the chance to read and review this book, the first in her new short story series, I dived into it as soon as possible. I easily read this in one sitting and it was such a fun book! It left a smile on my face and I am eager for the next book in this series.

It is very different from Pajonas her other books, while still being a typical Pajonas book, if that makes sense? It’s different in subject, but the style and originality is the same. Rice Cooker Revenge is about a rice cooker and a boy named Ryu who both work for The Chef. Neither of them really like the Chef and they grow friends and devise a plan for revenge. It was a fun and uplifting story. It isn’t long, but it’s long enough. There’s a begin, a problem and an ending and that all without it feeling rushed. It was the perfect length and while I often enjoy books, this one made me happy which is rare.

One of the things I like most is that we get not only Ryu’s point of view, but also that of the Rice Cooker and the Rice Cooker has it’s own personality. After finishing this book I wish I had my own talking Rice Cooker. Ryu isn’t in the best situation, he lives with his brother and hardly makes enough money to eat every day. He loves working in the kitchen and I easily related to Ryu as I love cooking myself as well. He works hard, but still doesn’t get any recognizion from the Chef, while he has some great ideas and a good work ethic. Oh and this book really made me crave some tempura as they work in a tempura restaurant!

I had expected a bit world building about these spirits that live in things, but there wasn’t any of that. And to be honest I didn’t miss it, for once it was enough just to know that there was a personality in the Rice Cooker and as nothing in the book explained it, it just made sense that it was the way it was without me questioning anything.

To conclude: I loved this little short story about the revengeful Rice Cooker. It is fun and put a smile on my face, it’s one of those books that made me happy just because it’s such a fun book. Both the Rice Cooker and Ryu are interesting characters and I liked following their story and seeing them become friends. It thought it was fun we got the perspective of the Rice Cooker as well. And I can’t wait to read the next short stories in this series!

What’s the most fun book you read recently?