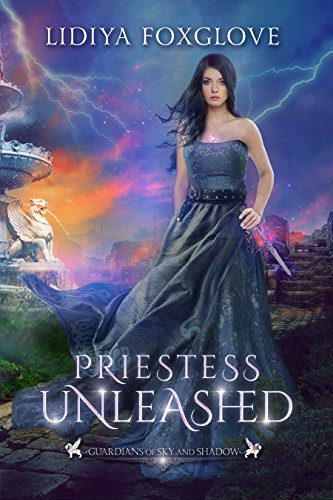 Priestess Unleashed (Guardians of Sky and Shadow #3)
by Lidiya Foxglove

Blurb:
They have been branded as mountain bandits, but they are the descendants of the ancient attendants of the priestess. Long buried secrets lie in this remote land. Phoebe will uncover the devastating truth as she comes into her powers. She’s ready to fight, but is she ready to bear the hopes and dreams of the entire realm on her shoulders? And will she be able to perform the Grand Quintet when one of her guardians is the enemy of the rest?

Priestess Unleashed is the thrilling conclusion to the steamy reverse harem fantasy trilogy.

This was such a spectacular ending to this series. I really enjoyed the first two books and was excited to see how the author would wrap up the series. I can only say she succeeded very well in giving this series a great ending. There is action, truth and lies that come to light, some drama and trouble they run into and ofcourse a lot of romance and some hot sex scenes. I really enjoyed this book and has a hard time to stop reading as I had to know what would happen next.

There is so much going on in Priestess Unleashed. Phoebe’s fourth guardian joined the group and that creates some tension, the situation with Gilbert and Rin and seeing how their new plan works out, Nico got hurt in the last book, new problems they have to face, they have to open the gate and find the dragons and also free their country from an oppressive ruler. I think this might be my favorite book of the series with all that’s going on, how well all the storylines blended together and there were some unexpected twists as well.

And there are definitely some moments where I wondered how they would make it through it. There are some difficult things they have to deal with. And I was so worried about one of the things that happened to one of Phoebe’s guardians. Although all the guardians have some things to have to go through and deal with in this book and while the road might be tough, it was great to see how they all got through this and deal with what happened to them.

And the title fits this book as well. Phoebe has all her four guardians now and is ready to fight. I liked how she has grown throughout this series and how she takes more leader like tasks on herself in this book, but at the same time she’s so normal as well, she’s still just a girl and I like how she also stayed in touch with herself as Phoebe and not only the roles she has now. It was great how she is so important for this world and is sene as the priestess and people count on her, but she also stay very down to earth and gets overwhelmed at times.

I loved seeing the dynamics between Phoebe and her guardians and also between the guardians. It might be one of my favorite parts of this series and looking back to see how all the dynamics started and changed is great. There are so many great dynamics here. The situation with Rin and Gilbert who love each other, but also love Phoebe. Forest and Abel where Forest hates Abel at first and has to learn to get over it and I liked how this was resolved and Forest jealously as well. It was so well done. And also Nico with his whole stance toward this and how that changed.

There are quite a lot of sex scenes in this book, which really works here and I like how they never take over the story, but are an important part of the story. I have to admit the grand quintet wasn’t as hot as I had expected, but that has something to do with the situation. Although I did like how realistic it was and how they had to move forward even tough it was the last thing on anyone’s mind. And the one after that was weird too. But there is a great scene with everyone at the end that I liked. And it was also fun to see different combinations we hadn’t seen before, like Rin and Giblert with Phoebe, the two humans with Phoebe, the two dragons with Phoebe and Abel and Forest together with Phoebe.

This book also was a great one in terms of world building. We learn a lot more about the dragon world in this book and it was so interesting! I really liked seeing how different the dragons were and how there are different types of dragons and they had their own internal struggles as well. There is a bit of politics, but it was quite interesting and I am curious how everything will play out after what happened in this book.

I really like the world the author created in this series and I am happy the author will write a spin-off. There are some plot lines that aren’t resolved yet that will probably continue in the next series. And I can’t wait to see how the spin-off series will be and I already started guessing who will be part of Himika’s harem. She really deserves some happiness after what she went through in this series.

To summarize: I love this series and this was such a spectacular ending to this series. I love how well the author manages to blend the different plot lines and themes in this book and manages to bring it all to a satisfying conclusion. The epilogue was awesome. There is a lot going on in this book and I had a hard time putting this book down. I liked seeing how all the characters developed in this book and also throughout the series as a whole. They each have their own troubles to deal with and I enjoyed seeing how it all got resolved. There are some sad parts as well in this book, but that does make sense given what’s going on. And I love all the character dynamics between the guardians and them with Phoebe and how all their relationships develop. I can’t recommend this series enough to fans of reverse harem fantasy romance.

What’s the last series you finished? Was is a good ending to the series?