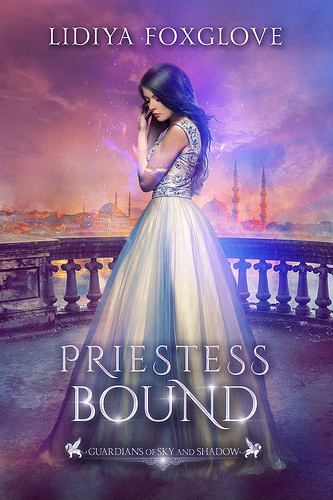 Priestess Bound (Guardians of Sky and Shadow #2)
by Lidiya Foxglove

Blurb:
Phoebe is the fated priestess, a channel for magic, whether she likes it or not. She has little power of her own—or does she? A piece of golden jewelry might hold the key to a plot to suppress the priestess’ true magic.

Until she can find the secrets, however, she has to stay alive and keep her four guardians in line:
Sir Forrest, her grumpy and reluctant but truly devoted protector;
Gilbert the bard, who fell in love with the Prince of Gaermon before he discovered his true fate;
Niko the Lucky Dragon, an arrogant smuggler who bows to no one but won’t make a move without rolling his dice;
and one who is her sworn enemy, but thanks to the magic, Phoebe can’t resist him—and he can’t resist her.

All her guardians have been found, but this is just the beginning. Who is a friend and who is a foe? What are the Shadow Guardians, really? The Emperor wants her dead, but even the Elders have not told the entire story…

This is a steamy reverse harem fantasy romance.

My Review:
Ever since I finished the first book in this series I’ve been looking forward to book 2. As soon as it released I bought a copy and started reading it. Priestess Bound was just as good book 1, I think I even enjoyed it a bit more. There were quite some interesting developments and reveals in this book and I just wanted to keep reading and see how things would unfold. And I was sad when the story ended as I just want the next book now.

The first few chapters didn’t fully pull me into the story, but as the story progressed I got more and more pulled into the story. There are some hints and bits of information we got in book 1 that we get more information about in this book. There were a few great reveals and I liked how we learned more about the world, the priestess and everyone involved. I also liked how not everything was as black and white as in book 1, now everything was more gray. And about some people I am still not entirely sure on which side they are and whether they are as good or evil as they seem.

Besides the great reveals we have in the story, the romance and characters develop a lot too in this book. Phoebe grows more into her role as priestess and it was awesome to see how she slowly changed in this book. Then there are her four guardians who all change and develop as well and also their relationship with Phoebe and the dynamics of them as a group. I really liked seeing how things developed and changed here. And there are some changes that make me really happy. There was a development I was hoping for that happened in this book and my only complaint is that they got interrupted before things got further.

The Reverse Harem aspect is so well done in this series. It’s one of my favorite Reverse Harem series so far. I like how all the men are so different from each other and not only in their personality, but also in their relationship with Phoebe, the things they struggle with and the relationship to each other. It’s very well done and I liked seeing how Phoebe interacts with all of them.

Sir Forrest who is a bit grumpy, but probably loves Phoebe the most at this point. He struggles a bit with his jealously toward the others and at the same time wishes they would love her as completely as he does. Gilbert is a good friend to Phoebe and the one she can always talk with. He is in love with someone else as well and struggles with how to handle that. I really liked how things progressed and developed on that front in this book. There was a bit of drama and tension, but by the end of the book I couldn’t be happier with where things end up. Nico is the guardian they only find toward the end of book 3. He likes being in control and likes to exert that control over Phoebe as well. Phoebe and him have mostly mutual lust, but it slowly develops into more. Which was great to see.

At the end of book 1 they meet the fourth guardian and this guardian isn’t willing to join their group yet. A lot of his plot line in this book was resolving that. His conflicting priorities, finding out the truth of who and what he was and that people lied to him and what that means to him. I wasn’t quite sure what to think of him for a long time. I did like he didn’t switch sides instantly and at the same time it still felt both too early and too late when he makes up his mind. I am looking forward to see how things progress in book 3 on that front after what happened at the end of this book.

Just like book 1 this book has a lot of steamy scenes. But while it is a very steamy book, I feel like at no point the sex overtakes the story. And in a sense the sex is as much part of the story as the other way around. Each sex scene seems to have a role and purpose and furthers the bonds between the characters and is unique in some way. I really liked how the author handled that. Although I liked some of the scenes more than others, they all have their place.

Unlike book 1, this one is told from multiple point of views and to be honest I feel quite conflicted about it. On the one hand I loved it as it gives the reader a better view into the different characters and their personality and it helps get to know the guardians a bit more this way. On the other hand I felt in many places it was unnecessary, removed a bit of the mystery surrounding the guardians and I would’ve preferred Phoebe point of view for some of the scenes. Even after finishing the book I still can’t make up my mind. I feel that in some places the different point of views add something, but at the same time I also think those things could’ve been conveyed for the most part in Phoebe’s point of view as well. And it bothered me that it differed from book 1 as I already gotten used to only having Phoebe’s pov there. I guess I just would’ve liked that to be consistent across the books. But at the same time it was great to get in the heads of the guardians for a bit and see form their point of view what they thought of Phoebe and everything that’s going on.

The world building gets nicely expanded upon in this book. I felt like the world become more alive and things all made more sense with the new information we learn in this book. Although I still would’ve liked a map of the world as I sometimes had trouble visualizing where things were in relation to other places. I also liked how some of the foreshadowing done in book 1 falls on it’s place here.

To summarize: Priestess Bound is a great sequel! While the start felt a bit slow, soon I got pulled into the story. There are a lot of reveals and developments in this book and it was so interesting to see where the story went in this book. It had some good twists and reveals that took me by surprise and others that made a lot of sense because of some well done foreshadowing in place already. I was happy with the direction the plot took in this book. And I enjoyed seeing the characters and their relationships develop in this book. The Reverse Harem aspect is done very well. There are a lot of issues that get addressed and I like how all the characters dealt with their own issues and how their connection to each other and Phoebe developed in this book. It is quite steamy again just like book 1, but I like how every sex scene has a role and each sex scene is different from the others. The world building gets fleshed out in this book and I liked how some things fall on it’s place and make more sense now. I wasn’t sure what to think of the multiple point of views in this book. On the one hand I liked getting the guardians their point of view and at the same time I think I would’ve liked having only Phoebe’s point of view. All in all this was a great read and I can’t wait to read the third and last book and see how everything gets wrapped up.

What’s the latest book 2 in a series that you read?