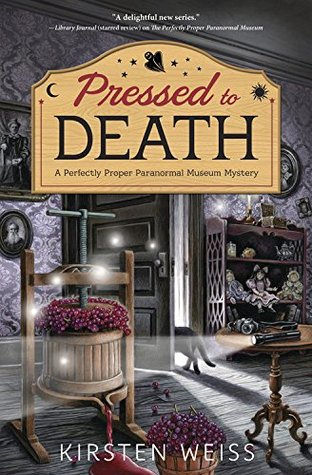 Paranormal museum owner Maddie Kosloski thinks she has the perfect paranormal exhibit for the harvest festival—a haunted grape press. But before she can open the exhibit, she’s accused of stealing the antique press. And when her accuser is found murdered, all eyes turn to Maddie.

Solving the crime is the last thing on Maddie’s mind, but her mother insists she investigate. Does her mother have a secret agenda? And why has the local charity, Ladies Aid, seemingly gone gangster?

In this light, cozy mystery, haunted houses, runaway wine barrels, and murder combine in a perfect storm of chaos. Facing down danger and her own over-active imagination, Maddie must unearth the killer before she becomes the next ghost to haunt her museum.

Pressed to death is the second book in the Perfectly Proper Paranormal Museum series. I enjoyed the first book and was happy to return this series. My thoughts about this one are a bit mixed, not sure if it was my mood or what, but some parts I really enjoyed and other parts not as much. The start of this book was a bit slow and I had a bit of trouble getting into the book. But there were also some great scenes and then around the halfway mark it got a lot better and kept my attention.

But on the other hand it felt like at times there was a bit too much in the book and not enough focus on the mystery at times. There is the ladies aid, the detectives, the haunted house, the romance, the side characters, the paranormal museum, the other wine sellers and the death café to name a few. There is are a lot of side characters and side plots going on that might or might not be connected to the murder and a few things got wrapped up a bit too rushed in my opinion.

Then this book has two of my pet peeves when it comes to cozy mysteries namely the not too believable method in which the main character gets involved into solving the mystery and the incompetent and in this case even unlikeable police. In the first book it felt more natural how Maddie got into solving the mystery, here it felt a bit forced somehow. And police detective Laurel really grated on my nerves, she seemed mean just because she could and was just such an annoying character. Her actions didn’t make sense and I couldn’t believe she actually could take those things based on such flimsy evidence. And at times it felt like the police were doing nothing except chase the wrong leads while Maddie figured things out.

The mystery was decent. I liked how just as in book 1 there was a current time and a past mystery. In this case the past mystery and current one both are connected to a grape press that came into Maddie her possession. I would’ve liked to see Maddie do a bit more research herself into the past mystery as now it was mostly historical society who solved that. Who the murderer was in the current day mystery didn’t really come as a surprise. I would’ve liked to see a bit more investigating as it was mostly her talking with some people and then at the end when she was piecing things together we didn’t get much of her thought process, which always just kinda ruins things for me as I want to know what she’s thinking.

The characters were nice enough and I was able to remember who was who, but didn’t really particularly grow fond of anyone. There is a bit of romance, but it didn’t get much attention and the parts that we did see I didn’t really care for. Based on his personality I thought his actions seemed a bit unrealistic and I wanted to tell Maddie to shallow her pride sometimes and just call him. It just got dragged on a bit even with it barely being there. It will be interesting to see how things develop in the next book.

To summarize: this was a fun cozy, there were parts I really enjoyed, but also parts I liked less. I had a bunch of smaller issues with this one, I couldn’t stand laurel and it felt a bit off how Maddie got into solving this mystery. At times it felt like there was a bit too much going on at times and it felt a tad slow at the same time. There are a lot of side plot lines. The mystery was decent enough, but not too surprising. I liked the subtle paranormal aspect, the cat and how there was both a mystery in the present time and a mystery from the past to solve.

What was your last book that you both enjoyed and had parts you liked less?

14 responses to “Review: Pressed to Death by Kirsten Weiss”