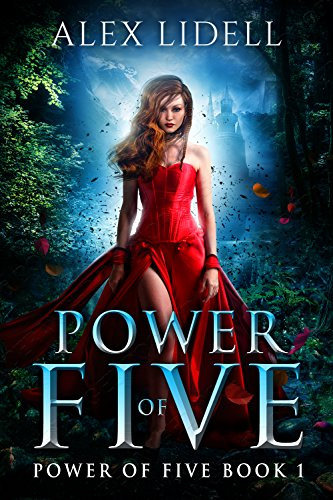 Orphaned and sold to a harsh master, Lera’s life is about mucking stalls, avoiding her master’s advances, and steering clear of the mystical forest separating the mortal and fae worlds. Only fools venture into the immortal realms, and only dark rumors come out… Until four powerful fae warriors appear at Lera’s barn.

River, Coal, Tye, and Shade have waited a decade for their new fifth to be chosen, the wounds from their quint brother’s loss still raw. But the magic has played a cruel trick, bonding the four immortal warriors to… a female. A mortal female.

Distractingly beautiful and dangerously frail, Lera can only be one thing—a mistake. Yet as the males bring Lera back to the fae lands to sever the bond, they discover that she holds more power over their souls than is safe for anyone… especially for Lera herself.

Power of Five is a full-length reverse-harem fantasy novel.

I’ve been curious about Power of Five since I first heard of it and I was excited when I received an ARC copy of this book. Power of Five is a Reverse Harem Fantasy novel that follows the story of Lera, whose life completely changed the day she meet the four Fae warriors she’s bonded with.

Power of Five was a well written book. I liked the bit of lore we discovered about this world, with the quints of warriors and the unusual situation of the four immortal Fae warriors who got bonded with the mortal girl. They are determined to sever the bond, but once they spend some time with each other they grow closer. I liked how there are some struggles and things they have to work through.

The author did a great job giving the four males each a distinctive personality and even from the start I had little trouble remembering who was who. I liked how well fleshed out their personalities were and how different they are from each other. These four males have fought together for years and now they have to get used to a new fifth member in their group. It was interesting to see how they each dealt differently with that. They all have their individual struggles as well.

Lera quickly grows closer to the four males, things progress quicker with some of the males, but I felt like there was enough attention for each of them and she spend time with all of them. And each of them has a different relationship with Lera, which is something I love to see in reverse harem books. Her interaction with each of them are different. With the bond between them, they had an instant connection to each other, but I thought the author did a good job showing their growing relationships and making me feel their romance. Things even heat up a bit already in this book with some of the males. And I liked seeing how Lera’s relationships with all of them changed and progressed over the course of the book.

I liked Lera as a main character, she hasn’t had the easiest life so far and now she has to adapt to how her life changes in a big way when she meets these warriors. It was interesting to see how she dealt with the change and how she struggled with some parts, but I also felt like she handled most things very well. She’s very determined to get better at things and do the best she can. I liked how she came across as confident, even tough she is in a situation unlike she is used to. And she cares so much for these males it’s hard to know what the right decision is to make.

While the romance felt very much like the focus of this book, there was a solid story going on as well and we get a bit of feel for the world too. I am especially curious about a hint we get of a conspiracy/ politics plot line going on about some people having their own agenda, while the fate of the world should be their main focus. And I think we’ll get to see more of that in the next book.

The world building mostly covers the basics only so far and at times I felt like the world didn’t fully come alive, but there was enough to give a feel for what the world was like. I would’ve liked a bit more world building, but maybe that will come in the next book. The story mostly focused on the quint and what they’re going to do with Lera and Lera getting to know them and the Fae world a bit more. I did feel at times that there was something I was missing in this book, but I can’t fully put my finger on what that is. Overall this was a great read and I am curious for the next book.

To summarize: Power of Five was a great reverse harem fantasy romance novel. The Reverse Harem aspect and the characterization of the main characters was done very well. It’s easy to remember who is who as each of the males has a distinctive personality. They all interacted and connected differently with Lera. It’s mostly a character driven book with focus on the romance, but there’s also is a solid story and some world building. There is a plot line I am quite curious about. The world building is enough to get a feel for the world, but I would’ve liked a bit more world building. Overall this was a great read and I would recommend it for those looking for a good reverse harem fantasy romance book.

4 responses to “Review: Power of Five by Alex Lidell”