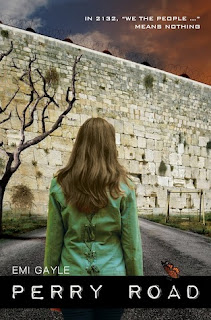 I have read the first 2 books in Emi her 19th year series and I was really excited when I heard she was writing a dystopia book. When I finally got around to reading it, it had been some time since I last read a dystopia book and this book reminded me again why I love the dystopia genre.

Perry Road is a really enjoyable book, while taking a slightly different road than most dystopia books out there. Perry Road had that keep reading feel, when I started reading I just kept reading tilll someone of something stopped me, which resulted in me having to stop mid-alinea sometimes, because I knew that if I read further I would be sucked into the story again. I heard some people mention this book is more political than most books, but at first this isn’t that obvious, later on in the book I realised why they said that and yes it focusses more on the politcal aspects than most.

The society in Perry Road isn’t really that much different than our current society, certainly at first, this dystopia world seemd pretty normal. It is only later on in the story I realized what had gone wrong in this society and it’s definitely not normal. Perry Road seems to sketch a possibility, something that could be the future of the US. I say could be, because while it is certainly believeable it is still fiction.

I really liked the characters in this book. Especially Erianna, the main character, she was so real and so naive and when people told her things where different than she believed, she questioned them. She felt so real and believeable, a real person would act this way. I also really liked Zane, while I hoped for more romance, I have to admit I actually liked the pace their relationship (if you can call it that) developed. He was really sweet, but also passionate about what he believed in and I loved all his history references. He was such a likeable character. Most of the story focusses on these two characters, there are a lot of side character, but none of them felt so real and likeable as Erianna and Zane. Erianna’s friends at the beginning of the book even annoyed me and I couldn’t understand why she still was friends with them and kept caring about them.

The world building is done slowly, we’re being introduced to a seemingly pretty normal society. And then I found out it isn’t. The registration process clearly brings the dystopia aspects to the front. And then the pace really picks up and revelation after revelation surprised me. I learned a lot more about the world and I loved how realistic and real it felt, although that’s also what makes it a bit frightening. The world described here is not that out-of-this-world than most dystopia’s, it believeable and pretty realistic, while still being fiction.

To conclude: I really enjoyed Perry Road, when I started reading I wanted to keep reading. I really liked Erianna and Zane, both are great characters, they are likeable and act believeable. The world building progresses slowly at first, with more information later on. I really liked the political focus of this dystopia world and it was a bit frightening how real it all felt sometimes. I can’t wait to read the sequel to this book, because Perry Road was awesome and I can’t wait to read how this story continues!