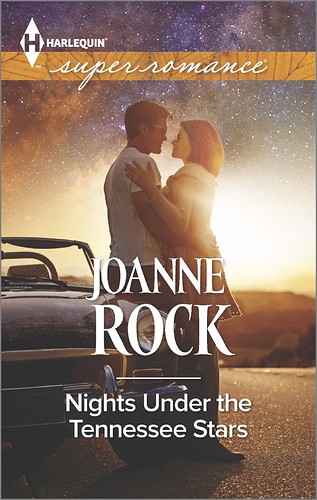 Nights Under the Tennessee Stars (Heartache #2)
by Joanne Rock

Erin Finley heads home to Heartache, Tennessee, after the perfect guy turns out to be anything but. She throws herself into running a vintage store with her sister and surrounding herself with the comforts of her small town. Then one rainy night, TV producer Remy Weldon shows up and almost sweeps her off her feet!

Remy sees more in Erin than she sees in herself. Quirky, beautiful and capable, he needs her for his antiques show—and for himself. Because Erin is the first star Remy’s found in the very dark night that has become his life. And she might just be able to lead him into the dawn…

I loved Promises Under the Peach Tree, so I decided to start this book right afterwards. Nights Under the Tennessee Stars is another delightful book by Joanne Rock, although I did like the first book in the series a bit more. There are some difficult issues that this book addresses and I felt like it was a bit darker at times then the first book. I really enjoyed this book and it was great being back in the little town again. This is exactly the kind of romance book I like as it has a great romance, while also having a story beside it and every character feels real.

I loved being back in this town again, this book takes place half a year later, so we see what has changed in the meantime and some things are still going on. We get to see Nina again in this book as well, it was nice to see her form Erin her point of view and hear how she was doing now. We also do get to see Bethany and Scott again and how they are doing now.

Remy and Erin are both great characters, while Erin is still recovering from a nasty ex, Remy deals with the death of his wife a while ago, which he can’t let go. I really felt for Remy and I wondered if he was ready for love as he was still so much in the past, Joanne Rock wrote that part really well and I loved how she resolved the issue in the end. I loved Erin. She’s an artsy type and runs a vintage shop and she really has her heart on the right place. There’s this initiative she starts in this book to get clothes for women who can’t afford any for their job interviews and it really hit a soft spot with me. It was thoughtful and I just loved what a nice person she was and it was great to see her helping other women.
I also liked Remy but it was hard not to feel sorry for him constantly. His wife has died and he never got over that, he can’t deal with it and my heart just broke for him and his daughter and what they lost. I find deaths like this always hard to deal with in a book and part of me just wish his wife was alive again as it felt like they had something beautiful together, but on the other hand I also liked Erin. I just felt like he belonged to his wife first and only second to Erin, but that’s probably more my view on the matter as the author wrote it really well.

The romance was well done, it started with an attraction that gradually grew into more. It was nice to see these two start from scratch, while the first book dealt more with a second chance romance. Although it did feel like this romance developed faster as they didn’t have a past already, but the pace was still done very well. It never felt rushed or too slow and I liked how both characters wanted to see where their attraction went and tried things out together before it became more difficult and deeper feelings got involved. Another thing I liked was how they actually talk, they do communicate and I felt like that really added to their romance. And there are some really sweet and fun scenes, involving dinner and cupcakes. They were adorable together and there are some hot scenes, but there’s also their past that overshadows everything.

The ending was beautiful, there is just something so sweet about a happy ending after having been through all the hard stuff with the characters and seeing them fight for their love and relationship.

To conclude: I really enjoyed this book, it has a great romance and I loved being back in this town and seeing some of the same characters as in book one. Erin and Remy are both great characters, although they both deal with issues form the past. They were great together, but I kept feeling a bit off as Remy still strongly for his dead wife as well. It was heartbreaking and sad at times, but also happy and uplifting. And we get Sarah, Remy’s daughter her point of view as well, which I liked. I really hope the author will write more books in this series as I’ve come to love this little town and want to see more of it.

14 responses to “Review: Nights Under the Tennessee Stars by Joanne Rock”