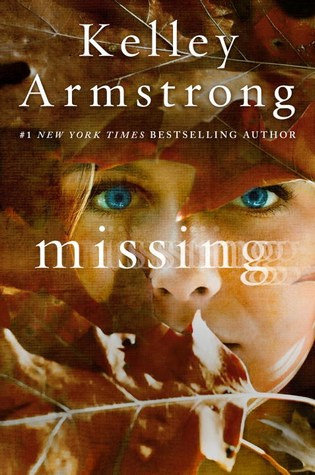 Blurb:
The only thing Winter Crane likes about Reeve’s End is that soon she’ll leave it. Like her best friend did. Like her sister did. Like most of the teens born in town have done. There’s nothing for them there but abandoned mines and empty futures. They’re better off taking a chance elsewhere.

The only thing Winter will miss is the woods. Her only refuge. At least it was. Until the day she found Lennon left for dead, bleeding in a tree.

But now Lennon is gone too. And he has Winter questioning what she once thought was true. What if nobody left at all? What if they’re all missing?

My Review:
I don’t normally read many thrillers, but I gladly make an exception when Kelley Armstrong writes them as she’s one of my favorite authors. Missing was an interesting read, with a thrilling mystery, some creepy scenes, a great main character and a nice romance side plot line as well. I found the start of the book a bit slow, but once she met Jude things picked up and I quickly got sucked into the story. It kept my attention and I had a hard time putting the book down at times.

Thriller’s usually aren’t my thing as I am not a fan of the creepy stuff. There are a few scenes in this book that did push that line for me, but I love Armstrong’s writing and her style makes up for a lot. There is a bit of animal cruelty and some human death’s as well. The main focus is on someone who is stalking Winter and two people who went missing and they’re trying to figure out what happened.

I did like the mystery part, the uncertainty of what’s going on and why and wondering who is behind this all. The mystery is a pretty good one, although not one you can solve on your own easily. There’s a hint that they discover at the end of the book and then they quickly figure it out, but without that piece of information things don’t fall on it’s place. Once you do have that information, things suddenly make sense. I did find the ending a tad rushed and would’ve liked a bit more wrap-up, tying up the lose ends and answering a bit more questions.

I liked Winter as a main character, she’s had a tough life. She lives with her father in a trailer park, her mother died and her sister left town. Winter plans to leave town as soon as she graduates to go to med school. She’s pretty capable and lives in the forest surrounding the town a lot and can hunt. Then one day she finds a boy named Lennon and that kickstarts the whole plot. I think Winter is a great main character, she’s interesting enough, knows how to take care of herself and wants to solve this mystery.

But while Winter was an interesting character, I liked Jude even more. He’s a great character and I liked getting to know him better and figure ut the different layer of his personality. Winter is a nice character, but Jude is great. While the romance is a side plot line, I was totally shipping these two and it was one of my favorite parts of the book. I love how Armstrong writes her characters and romances and the romance totally worked for me. I loved the scene with the piano and their awkward second kiss. I wouldn’t have minded reading even more about these characters.

To summarize: if you’re looking for a well written Young Adult thriller I would recommend this one. I usually stay away from this genre, but I did enjoy this one and the mystery surrounding who was after Winter. There were some gruesome scenes that made me a bit uncomfortable, including one involving animals sadly. The mystery and thriller aspect is a good one, I wanted to know who was behind this and why. Although without the final clue the mystery is basically impossible to solve yourself. I liked Winter as the main character, she was a smart and capable young women who wanted to get to the bottom of this mystery. I liked Jude even more, he was so itnerestign with the different layers of his personality. And the romance side plot line was great! It was one of my favorite parts of the book. The ending did feel a tad rushed to me and I would’ve liked a bit more wrap and answering of some remaining questions. But overall this was a great read.