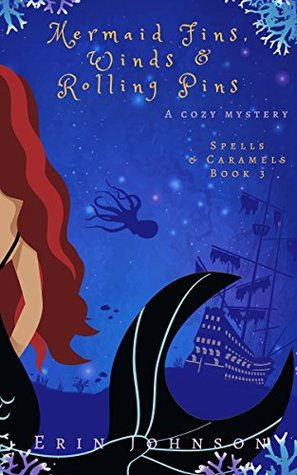 Blurb:
Murder at a Mermaid Nightclub

The enchanted village of Bijou Mer’s on high alert, with the villainous Horace on the loose. Imogen’s excited to escape the tension with a trip to the underwater Mermaid Kingdom to bake for the young mermaid queen’s engagement to the pirate king.

But when the mermaids turn out to be less French Riviera and more Jersey shore, the bakers are wrapped up in their world of clubbing in sea caves and fighting off seals for the best tanning spots, and are embroiled in a pirate smuggling scandal. It gets worse when a member of the mermaid court is found dead in a fishing net, and one of Imogen and Maple’s baked goods seems to be the murder weapon.

Imogen tries to fish out the real murderer to clear their names, while struggling with her romantic feelings for Hank. At the same time, she’s working with him to learn to control her magic and investigate Horace’s riddle and her own mysterious past.

As the mermaid court’s freewheeling lifestyle rubs off on the bakers, the gang lets loose and passions rise to the surface. But with a giant octopus crawling the ocean floor, the mermaid court filled with simmering secrets and scandals, and the ever present threat of the Badlands Army, Imogen must solve the murder before she ends up fish food herself.

My Review:
I am really enjoying this series so far and it has quickly become one of my favorite cozy mystery series. Mermaid Fins, Winds & Rolling Pins is another great book in this series. In this book Imogen and her friends travel to the mermaid kingdom to bake there. I liked the new setting for this book and it also gave the opportunity for Imogen and Hank to discover what was between them without the whole water kingdom watching.

The mystery takes a while to start and I thought the mystery was a bit less intriguing than in previous books, but it’s still a decent mystery. I did predicted who the murderer was, even with few clues in that direction. I wouldn’t have minded a few more clues and hints regarding the mystery. But even tough I suspected this person, I wasn’t sure of the motive, so it was interesting when that came to the surface.

This was another fun book in this series. Besides the mystery there’s a lot of other things going on, Maple and Willy clash again, Imogen learns more about her magic, there’s the riddle they got at the end of the previous book and there’s a bit of romance. I like seeing how Imogen learns a bit more magic in each book, but I also appreciate that she is still so new to this and doesn’t learn everything at once. She masters a few spells in this book, but also struggles with some other aspects of her magic. It was well done. It also was neat to see the plot line about the Badlands Army advance a bit.

It’s always fun to spend some time with Imogen and the other bakers and side characters. I like seeing them interact and how the dynamics shift a bit in each book. There’s also more Iggy again, I really like his character. And I was happy with how the romance progressed a bit in this book. It’s been very slow building and I felt like this book marked a big step in their relationship. There are some great Imogen and Hank scenes.

I liked the underwater setting and learning more about the mermaids and pirates. Although the mermaids were a bit over the top flirty at times, they got drunk a lot and flirted and joked. But I also kinda liked how the author gave her own twist to the mermaids, it sure didn’t feel cliché. I didn’t like queen Winnie at first, but there were some scenes where I did appreciate what she did and stood up for what she believed in. While this isn’t my favorite of the book of the series so far there was still a lot to like and I enjoyed reading this book

To summarize: This was another fun read! I like the mix of paranormal and mystery elements. In this book we get to visit the mermaid kingdom and learn more about the mermaids and pirates. The new setting was fun and we meet a bunch of new characters as well. I did predict who the murderer was, but couldn’t figure out the motive, so it was nice to see how everything tied together in the end. There is a bit of romance as well, which I liked. And Imogen learns more about her magic, a bit about her family and the plot line about the Badlands Army advances. I am looking forward to the next book in this series!

What’s the last book with mermaids you read? Where would you got for a swim if you could turn into a mermaid?