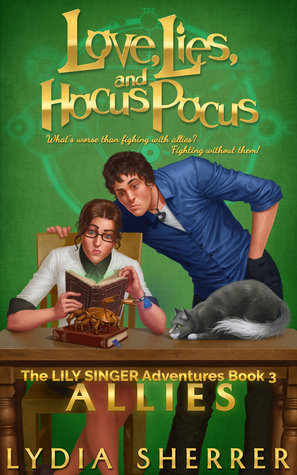 Blurb:
What’s worse than fighting with allies? Fighting without them!

After learning a truth that would have been easier left in the past, Lily must now cope with the consequences and figure out if she’s strong enough to face the future, and overcome it. With new allies, and old friends, making life complicated, Lily, Sebastian, and Sir Kipling must race to stop her father’s evil plans before they come to fruition. Will they be able to work together and save the day? Or will they let their differences divide them?

Allies is the third installment of the Lily Singer Adventures urban fantasy series. Full of unexpected twists and snarky humor, this story has been known to cause: loud snorts of laughter, inexplicable craving for tea, and loss of work productivity. If you enjoy magic-filled adventures like Harry Potter and Sabrina the Teenage Witch then you’ll love Lydia Sherrer’s delightful new series.

My Review:
Allies was another great book in the Lily Singer series! I really enjoyed this one. I do admit it took me a while to get into the book, not sure why. So the start felt a bit slow, but after having read a chapter or so I really got into the book. By then I quickly got invested and wanted to keep reading. The story picks off shortly after the end of book 2 and deals with the aftermath of what happened at the end of book 2. There’s a bad guy they’re dealing with and want to try and stop, but some other things as well. We also find out more about what the bad guy is up to and meet some new side characters.

I felt the tone of this book was slightly more serious than the first two books, which made sense given the direction the story took, but at times I did miss the more carefree adventurous feel of the first two books. There were some great developments in this one and I liked seeing where the story went. There’s a lot going on and it was great seeing how the characters dealt with this new threat. And with the way things end I am really looking forward to delve into book 4 soon.

Like the first two books, this book is again split up into two episodes with an interlude in between told from Sebastian’s point of view. We don’t see as much of Sebastian in the first part of the first episode as I would’ve liked, but it was nice to get the interlude after that and see what Sebastian had been up to in that time. I loved seeing the dynamic between Sebastian and Lily in this book and how they maybe slowly are inching towards admitting their feelings. It’s the perfect slow burn romance! And they are so fun to read about.

Another thing I really enjoyed about this book was seeing Lily change in this book. Having been through some difficult stuff at the end of book 2 she now has to deal with that and I liked how she did her best to adjust her attitude at times. I also felt like she acted very realistically, she doesn’t change overnight and she does make the same mistake, if you can call it that, again in this book. But that just seems to make her more human and it’s part of her personality. It was great to see how she handled things in this book and I feel like she’s really growing into her own. She also learns more about magic and grows in that aspect as well.

This book was again very well written and I love spending time in this world and series. There are new things we learn about the world int his one and also about the magic. There are some interesting things Lily learns and discovers in this book. One things I am not sure what to think of is how some fictional character might have been real after all, not sure why, but it just felt a bit off to me. But really that’s only a minor thing. We’ll see how I feel about that in the next book as it seems that will play a bigger part then.

This book is filled with new challenges for the characters and I enjoyed seeing how they all faced this. I also loved how we got to see even more of Sir Kipling in this book. It felt like he played an even bigger role and accompanied Lily more often and interfered in her life more often. It was fun as I really like Sir Kipling and his snarky personality.

To summarize: if you love a good urban fantasy series with realistic characters I can’t recommend this series enough! This book was another great read and I loved reading about all the changes and developments in this book. We see more of Sir Kipling in this book, which was great. And I really liked seeing Lily change a bit in this book as a result of what she has had to deal with so far. She feels like such a realistic character with flaws and strengths and I enjoyed seeing how she dealt with everything going on. The tone of this book did seem a tad more serious than the first two books, but that makes sense given there dealing with trying to stop a bad guy now. The slow burn romance moves slowly along and I liked seeing the small changes in Lily and Sebastian their relationship. There are some new things to discover about the world and magic and some new side characters that get introduced. It was a great read and by the time I finished this one I was just glad I could start book 4 soon as I wanted more!