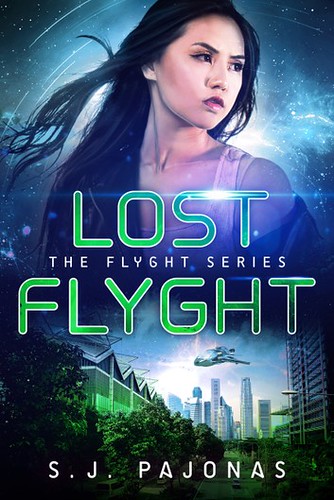 Blurb:
A frustrated captain. A starship on the fritz. Can she salvage her smuggling trade before jealous rivals knock her out of the galaxy?

Vivian Kawabata feels like her wings have been clipped. With her broken ship in the repair yard, and her crew begging her to take a break, she agrees to a private villa getaway with the chance to seduce her new hot medic. But her beach vacation becomes a stressful battleground when an ex’s former consort swoops in with a destructive agenda.

With her family’s farm at stake, the only way to outmaneuver the cutthroat may be by getting back to her roots… and extraordinary plants. But even if she digs up the dirt she needs, she still has to deal with in-laws, shady shopkeepers, and a shocking discovery aboard her ship.

Can Vivian get her vessel and her men aloft, or will her operation crash and burn?

Lost Flyght is the fourth book in the Flyght Series of sci-fi reverse harem romance. If you like seductive space operas, warp-speed world-building, and high-octane twists and turns, then you’ll love S. J. Pajonas’s star-struck tale.

Lost Flyght is the fourth book in the amazing Flyght series and I was excited to dive into this one. I was left with so many questions at the end of book 3 and I wanted to see what happened to those plot points and we get most of those answers in this book, while ofcourse new questions and plot points also pop-up. There are some great reveals and surprises in this one, especially when we find out what is going on with the ship, I definitely didn’t see that twist coming.

Vivian again has a lot to deal with in this book. Her ship is being repaired after a small fire in the last book, Jinzo’s ex is still a pain, things with the seeds aren’t progressing as fast as she hopes, she has to meet Jinzo’s family, she’s still trying to decide what to do with Gus and above it all she’s stressed and not sleeping well. There is a lot going on and all the plot lines there definitely is no dull moment.

I felt so bad for Vivian with how much stress she is under and it’s hard and exhausting to read about at times as she doesn’t get a break and she has a hard time getting the rest she needs. I really wish Vivian would get some more moments of rest and relaxation as she is way too stressed and gets too little rest. At times it gets a bit too much. I was happy that her guys try to make her see that she can’t continue like this and has to think about herself as well. They all care a lot about her well being.

With how much there was going on, it was nice to see some resolution to some of the ongoing plot points and others that develop or head in another direction. I was happy to see how Vivian dealt with Jinzo’s ex, I wasn’t sure how that would turn out, but I like the direction it took and how Vivian handled things. The plot line surrounding what’s wrong with the ship continues for most of the book, but then at the end we find out what’s been going on and it’s quite the twist. And there’s more about the superhero seeds, I liked seeing Vivian try out a new one, although the aftereffects aren’t as pleasant. There are also some new things that come up like the new AI dealer they contact and the situation with Gus’ family.

One of my favorite things about this book and the series in general is the romance. The romance is a bit on the background in the first half, but has a more prominent role in the later half. It was fun to see Vivian and Gus spend some more time together and seeing whether Vivian decides to follow her heart and invite him to her network or not. I was quite curious to see what would happen there and I am happy with the outcome, although there is an unexpected twist and conversation with Gus mother that I think will have an impact in later books.

Even though the romantic focus is on Gus, we still see enough of the other two guys as well. There also is still plenty of sweet scenes with Jinzo. He’s still my favorite. We don’t see as much of Ken in this book, but he’s still around and there are some scenes with him and Vivian as well. There also are some awesome scenes of them all together. It really is awesome to see how Vivian’s network develops and how all these men care about her and also interact with each other well. The whole reverse harem aspect is handled so well and in a way that feels natural for this world.

I also enjoyed seeing more of the world again in this book. Vivian visits a new planet and spends some time there. And the scenes aboard the Lee home ship were great as well. I really love this world the author created and it’s a joy to spend time in it.

To summarize: Another great read in this awesome series! Vivian has a lot to deal with at times. I liked how the plot keeps moving, there isn’t a dull moment and it was nice to have some plot lines get resolved, some new ones pop up and other develop in new directions. There also are some great twists and reveals and I liked seeing the direction the plot took. I do feel bad for Vivian for how stressed she is and I wish she would have some time to rest and relax. It’s a a bit much and tiring to read about at times. I really like seeing how the romance develops, with this book focusing on Gus and seeing how that relationship develops. There is still plenty of scenes with Jinzo and while there is less of Ken in this book, there are some nice scenes with him as well. I like seeing how her network comes together, how much the guys care about her and how they get along with each other well too. It’s a lot of fun to spend time in this world and I like seeing more of it and spending time in this universe.