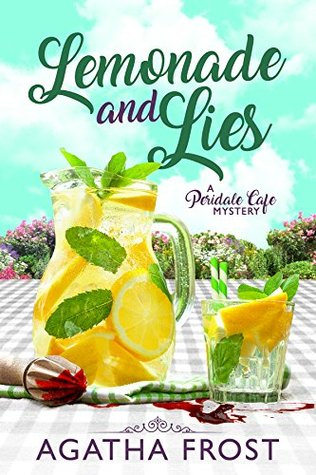 When the entire village is invited to a garden party for a mysterious ‘special announcement’, nobody expected that party to end with a man being thrown to his death from a window. The murder is committed at Julia South’s estranged father’s manor, so all eyes in Peridale turn to her to solve the case. In a race against the clock, Julia must juggle her blossoming romance with Detective Inspector Brown, and her young lodger, Jessie’s, sudden strange behaviour, to uncover the truth behind the man’s untimely death. With members of her own family in the frame, will Julia like what she discovers?

Book 2 in the Peridale Cafe Mystery series! Can be read as a standalone, but enjoyed better as part of a series. A light, cozy mystery read with a cat loving and cafe owning female amateur sleuth, in a small village setting with quirky characters. No cliffhanger, swearing, gore or graphic scenes!

My Review:
Once I finished the first book in this series I happily started book 2 right after that. Lemonade and Lies is just as good as book 1, maybe even a bit better. As I already knew a bit more of the characters and the town it was easy to get sucked into this book. I like this series, they are relatively quick reads, contain a fun murder mystery and the characters are interesting too. All in all these books are just a lot of fun and I am looking forward to read more by this author.

I liked the mystery in this one. The focus is on a few possible suspects, and you know one of them is likely the murder. But it’s always a question whom of them actually did it and what are the red herrings. From the start I was thinking in the right direction, but guessed the actual murderer wrong. Although I think it would be near impossible to figure it out as there were very little clues in that direction. But once it was revealed it did make sense and I did notice the few clues that pointed in that direction. It was a nice twist and I was pleased my guess had been very close.

The side plot lines also continue a bit in this book, but like in the first book there’s a strong focus on the mystery and less on the rest. But that totally works here. The side plot liens were fun too. I liked getting to know a bit more about Jessie and there’s a small plot line surrounding her and a secret she’s been keeping. I also liked how the romance between Julia and Barker develops a bit. And we see more of the other side characters as well. There are a few side plot lines involving some of the suspects as well and we get a better feel for this town and the people who live there.

This series is fun to read so far and I am already looking forward to the next book. The books are relatively quick reads, but as a lot of focus is on the mystery, the mystery still feels well done. There’s a bit less focus on the side plots, so those developed slowly but surely over the course of the series. Which works nicely for this series. I like figuring out the murder mystery alongside Julia, she has a good eye for gathering the right clues and keeps an open mind. She a fun main character to read about.

To summarize: I started this book right after book 1 as I really enjoyed it. Lemonade and Lies is a great read, maybe even better than the first book. I really enjoyed the mystery in this one and figuring things out alongside Julia. I like Julia as a main characters and the side characters are fun too. I especially like Jessie and it was nice to see more of her in this book. I was pretty close with my suspect for who as the murderer, but guessed the actual person wrong. There were some clues in that direction, but they only make sense once you know who it is. The side plots develop a bit more slowly, but they are fun too. I am already looking forward to book 3!

When you read a book with a mystery do you try and figure things out?

8 responses to “Review: Lemonade and Lies by Agatha Frost”