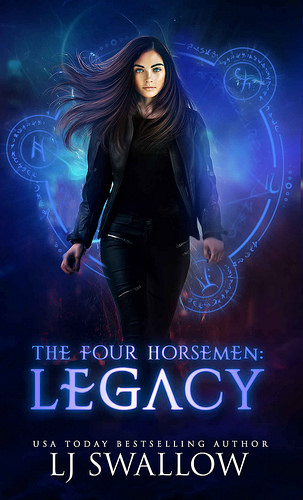 Blurb:
What’s worse than being pursued by the Four Horsemen?
Discovering you’re the Fifth.

Verity Jameson’s day switches from mundane to disastrous when she runs down a stranger with her car. Fortunately for Vee, she can’t kill Death.

Death, who just happens to be one of the Four Horsemen, and he’s looking for her.

The Four Horsemen spend life preventing the end of the world, not bringing on an apocalypse. As gatekeepers of the portals which exist between the human world and other realms, the team fight to keep the portals closed and the supernatural forces under control. Without their fifth member, the Four Horsemen are losing the battle.

Now they’ve found Verity and what they tell her goes far beyond the conspiracy theories Vee spends her free time investigating.

A new life with four dark, sexy and dangerous men fighting demons, vampires and fae? Not what Vee had planned, but a hell of a lot more interesting than her boring job in tech support.
So what happens when the unbreakable bond of the Five takes control in a way none of them expected?

My Review:
Legacy was a good start of this series. It’s fast past and gives a good introduction to this series, but at the same time it failed to fully pull me into the story yet. Although that also could be due to my weird reading mood and not knowing what to read. And the more I read the better it got. Legacy follows the story of Verity, who can tell when someone lies and hates lying. She’s living a normal life until she meets 4 new boys and finds out they are the horsemen and she’s the fifth.

I liked the idea of how the horseman are real, but instead or harbingers of the apocalypse, they actually protect and guard this world against the paranormal creatures who want to take it over. The book feels very much like a start of a series book with how we’re introduced to the characters and get a feel for the world, but at the same time it just leaves you wanting to know more as you don’t get quite enough of everything.

For some reason I had a bit of trouble fully getting the story at first. I liked Vee’s quirk of always telling the truth, but then the first chapter was a bit weird and I kept wondering what she was doing in that bathroom anyway. Shortly after the start she already meets Death and then things start moving. The further I got in the book the better it got.

I did had the mistaken idea that she would get to know she was the fifth the moment she first meets Death, but he actually pretends to be a normal human for a while and ask her to go to the pub and meet his friends. But quite quickly something happens and they have to tell her what’s going on. I did like how quite quickly they tell Vee what’s going on or at least the main points, as I do have the feeling there’s a lot they aren’t telling yet.

I am not too sure about the set-up for the romance so far. The four boys and Vee are all connected and I didn’t really care for the whole connection/ energy thing and how it compelled them to stay together. It just felt a bit off to me. And I would’ve liked a bit more getting to know each other and less of the connection type of romance. So far it’s mostly a lot of attraction to each other and there’s a bit of drama about how they can’t be together. Which didn’t really make much sense to me. So I am not fully feeling the romance yet, but I do like the characters so far.

I liked how each boy was pretty different and had a different personality. Even while we only know a bit of them so far, their different personalities shone through and it was easy to remember who was who. There are also a few chapters from some of the boys their point of view. And it was neat how the horseman thing was worked into their powers. I also liked Vee for the most part. Her quirk of telling the truth and how that was also her power was interesting. I thought it was realistic how she freaked out a bit and had trouble dealing with what she learned.

There is only a little bit we learn about the world so far in this book. We get to know they are the horseman and that different type of paranormal creatures exist and different worlds. But it only feels like the tip of the iceberg and a few things were just a tad confusing due to not knowing everything yet and the world building doens’t fully come alive due to that yet. But I am sure that’s something that will change as the series progresses.

To summarize: This was a good start of this series. It does very much read like the start of a series and introduction to the characters and world. I did enjoy this book, but for some reason I didn’t get fully pulled into the story at first. It did get better and better as I continued. The writing was well done and I liked the characters so far and they all had their own personality. But I didn’t really feel the romance yet, as so far it’s mostly a lot of attraction and this connection thing they have to each other. There’s only a bit we learn of the world so far, but I am sure that’s something that will be expanded on over the course of the series.

Have you read a book based on the four horsemen?