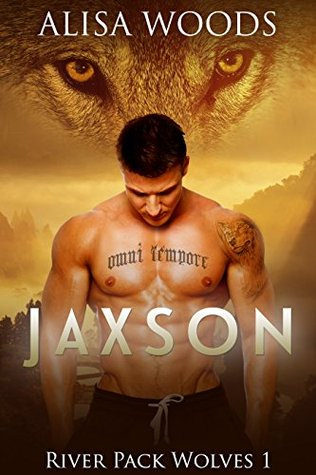 Blurb:
Three brothers. Three Secrets. One hope to save the shifters of Seattle.

Former SEAL Jaxson River would give his life for his brothers and his pack, but if he doesn’t claim a mate soon, he’ll be forced to step down as their alpha. There’s only one problem: Jaxson’s dark secret would kill any mate he claimed. With someone kidnapping shifters off the street—and only Jaxson and his brothers, Jace and Jared, to stop them—now is not the time for his secret to come out.

My Review:
Jaxson is a great start of a new series. I was in the mood for a good paranormal romance and that’s exactly what I got. Jaxson starts off as a typical paranormal romance, but slowly more original touches got added and by the end I was really enjoying this book. Both main characters have a secret that adds something interesting to the story. This is mostly a paranormal romance, there is a bit of a suspense/ military plot line that’s set-up here, but doesn’t get resolved. So my guess is the next two books continue that plot line. The plot is on the faster side, but never feels rushed.

From the moment Olivia resigned her current job because she wouldn’t do the type of work her boss wanted her to do, I knew I was going to like her. Then in the next moment she puts herself in danger to help a shifter. Olivia came across as a very kind person and only towards the end of the book I fully understood how much she would do for those she cared about. She carries a heavy burden with her, does everything to help others in need and can easily calm people down. I liked her as a character, although I did feel sad how she thought Jaxson deserved someone better and couldn’t possible want her.

Jaxson has a secret he never told anyone and he knows he doesn’t have long before the truth comes to light. While he’s investigating some shady business he runs into Olivia who tries to save him and he immediately falls for her. He’s your typical alpha male, but also respected Olivia. Which I liked. He really cares about Olivia and does his best to show her she’s worth it. He also fairly quickly tells her his secret so she can help him keep it a secret from the pack a bit longer. I wasn’t a big fan of the trying to find a mate for Jaxson plot line, as it was obvious the one helping him with that is the women he really wants.

The romance develops pretty quickly, they go from strangers to in lust pretty fast, but I still felt their connection and I liked these two together. Especially towards the end there are some really heartfelt scenes between these two and they were great together. I really liked seeing how much these two cared for each other and I liked seeing the changes into them because of that.

The side characters where all pretty interesting as well, most stays to the background. But we learn enough about Jace and Jared to make me curious about their stories. We also meet some of the Wilding pack members, who will have their own spin-off series. I really liked meeting those characters already and it made me wonder what more we’ll see of them in later books.

The world building stays pretty low key in this book, most of the focus being on the plot and the romance. The world building that was presented was interesting. I liked how werewolves didn’t seem to live in the shadows too much and the public knew about them, but they still stayed in the shadows mostly and didn’t reveal they were shifters too everyone. There are also some hints about other paranormal creatures. I had hoped to get more of the pack feel, but there are only a few scenes were we see more of the pack and those are mostly the suspense type of scenes and one towards the end.

To conclude: this is a great and solid start to this paranormal romance series. It started off as a just okay read, but I ended up really enjoying it. Olivia and Jaxson are both great characters and they both have a secret that added something interesting to the mix. The romance did moved ahead a bit fast, but I did like these tow together and it’s obvious how much they care about each other. We also meet the next main characters Jace and Jarod and I am curious about their stories. The world building stays to the sidelines, but there’s enough to get a bit of a feel for the world and how the pack works.