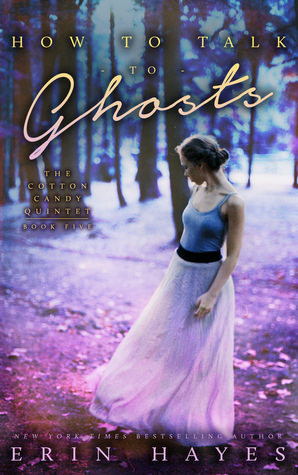 As someone who can talk to ghosts, Lita’s always been more comfortable around the dead than the living. That’s especially true with her estranged father, who cares more about building his business empire than her.

Then her eccentric Uncle Neptune died, leaving behind an aquarium that Lita’s dad wants for himself. The only problem: Neptune left it to someone else.

Now Lita’s dad wants her to help him to get it back. But her uncle’s friends are so…strange. It seems like everyone has their secrets, including her father. And he will stop at nothing to fulfill an ancient conspiracy to take over the world.

And Lita may be the only one who can stop it.

Ah this was such a great and exciting ending to this series. And a bit sad too to see this series come to and end. This has been such a fun series to follow. This book brings it all together and nicely wraps it up. We see the main characters and some side characters from the previous books again, secrets come to light and we meet some new characters as well.

The main character in this book is Lita, who can talk to ghosts. I liked her as main character and she had this fun quirk with how she loved fortune cookies. She likes to help ghosts find peace so they can move over. But in this book she gets entangled into something much bigger. Her father is determined to take over Neptune’s world and Lita has to decide on whose side she is and what’s right. And she quickly finds out there’s more going on and the whole world might be in danger.

I liked how this book really felt like a conclusion to the series. While we get a new main character, this book does bring all the previous main characters and even some side characters back together. And they work together to stop this threat to Neptune’s World. So while this is still very much Lita’s story, it also reads like a great to conclusion to this series and the other character’s plot lines. It was fun to see them all together and while Lita had an important part to play in the events in this book, the other characters also played an important part.

I liked how this book tied everyone’s stories together. In the previous books we have seen multiple characters as well, but besides the first book, most books still focused more on that individual characters story with some connections to the other ones. But here everyone was together and worked together and it was great. I quickly read through this book as I had to know how it all ended. There’s a big main plot line going on and everyone’s powers or supernatural part was needed to stop this. I also liked how it tied back to some events in previous books.

We learn a bit more about ghosts, the ghostly world and even some other supernaturals. I felt a bit bad for Lita how she never had the chance to really get to know her uncle Neptune and for what happened with her father. The ending was great and it’s a great ending to this series and to Lita’s story. There were some sad notes as well as some happy notes at the end, which made for a good ending. I also liked the bit of romance going on in this book. While it’s mostly a sub plot, I did really like that part. There are some very sweet scene between these two and I liked how it was clear Ryan really understood Lita.

To summarize: I really enjoyed this series and this book is the perfect way to wrap it up. We meet a new character Lita and while this is her story, it’s also the conclusion to the series and the other character’s stories. I really enjoyed seeing all the previous main character together again in this book and how they worked together to counter the threat to Neptune’s World. The story also ties back to the previous books. It was great how this book blended everyone’s stories, each character had a role to play in this final book and I think it was a great way to end up this series. I liked getting to know Lita and even though she hasn’t been part of this group from the start I liked seeing how she got close to everyone. I also liked the bit of romance, there are some very sweet scenes between them. All in all this was a great end to the series and a great story. I really enjoyed it one and didn’t want to stop reading!

What’s the last book involving ghosts that you read?

18 responses to “Review: How to Talk to Ghosts by Erin Hayes”