Today is my stop during the tour for His Last Defense by Karen Rock. I review this book, there’s a short excerpt, an interview with the author and a giveaways. 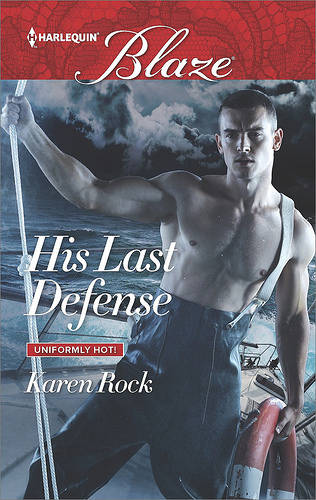 His Last Defense
by Karen Rock

Years ago, Coast Guard rescue swimmer Dylan Holt left Kodiak, Alaska, with his heart in pieces. He thought Nolee Arnauyq and her mouthwatering curves were behind him–until he’s sent to rescue the crew of a capsizing boat…including Nolee. And Dylan is definitely not ready for the too-familiar way his body aches at seeing her again.

Nolee’s always gone after what she wanted, and to hell with the risks. Now she’s a rookie ship captain taking on the deadly waters of the Bering Sea. But out on these treacherous waters, there’s no way to avoid the sizzling sexual tension between them–or the dangerous pull of emotions that could leave both their hearts lost at sea…

After reading Karen Rock her first Blaze line book last year I couldn’t wait to get my hands on this one and I am happy to say that this one is just as good, maybe even better. His Last Defense follows Dylan and Nolee. Dylan is a rescue swimmer who will be back into his home stats of Alaska for a short while and he meets his first love again, Nolee. Nolee is the captain of her own ship now. They are both great characters to read about, both with a lot of personalities, strength, but also some flaws and things they struggle with.

This book had my attention from the first chapter. It starts with an action packed and emotional scene and from that moment I knew I was going to enjoy this one. It really was a great way to start the book and sucked me right into the story.

This is a hot second chance romance. Dylan and Nolee were friends and then more, until they broke up over something and went their separate ways. Now they meet again and have a chance to make things work again. I liked how these two had a bit of a past, they know each other well and their time apart hasn’t diminished their feelings. They really were good together, but they could be a bit stubborn and sometimes forgot to actually talk things through. These two had some great chemistry and there were some hot sex scenes in this one. But even outside the bedroom these two work well together and I liked seeing them spend time together on the boat and reawaken all their feelings.

There was one scene at the end that bothered me a bit as I saw it coming from a while already and it just felt a tad out of character. Dylan said some things that didn’t seem like he would say as he knew Nolee better than that. And it just frustrated me a bit they had some miscommunication going on there. The ending was great though and it left me feeling happy about these two.

The focus on this one is mostly on the romance, but I like how the author also gives us a glimpse of Nolee her job as captain and crab fishing. I don’t think I ever have read about that before and it was interesting to have the story take place on and around sea and learn a bit about fishing. The boat also made for an interesting setting with the close quarters and how Dylan and Nolee can’t really avoid each other.

This book has a strong focus on the romance and the characters. Nolee and Dylan both have some things they struggle with and they get confronted with those things in this book. Nolee has always valued being strong and independent, but she slowly learns it’s okay to ask for help or lean on others now and then. She’s very hard on herself at times, I thought she was an interesting character. While Dylan often keeps an emotional distance from people and pushes them away or runs away and he slowly learns to keep some people close. It was really interesting seeing their personalities in play in this novel and also how their characteristics caused them to break apart the first time and how they struggle not to let the same happen now.

To summarize: I really enjoyed this book. It starts with an action filled and emotional scene and grabbed my attention right from the start. Both main characters are interesting characters and I enjoyed reading about them. And when they get together the sparks fly, these two have a lot of chemistry. The romance is a second chance romance and I really liked their romance. These two are great together, but they have some issues they have to overcome. There was one scene at the end I didn’t like as much as I saw it coming and thought they acted a bit out of character. The setting was well done too, set mostly on and around the sea in Alaska. It was interesting to learn a bit about Nolee her profession as captain and crab fishing. All in all another great book by Karen Rock and I am already looking forward to her next book!

Tasty Q&A with Karen Rock. Below is a short premade interview with the author. I thought it gave some itneresting insight in this book, so I wanted to share it with you :).

Describe yourself in five words or less.
Romantic dreamer and complete dork.

Can you tell us a little about your book?
This is a high-stakes, action-packed second-chance romance that takes place on Alaska’s most deadly waters: The Bering Sea. Nolee Arnauyq is a crab fishing boat captain who’s determined to make her own way in a man’s world after growing up dependent on others’ charity. She doesn’t want to be rescued, least of all by the ex that broke her heart, USCG rescue swimmer Dylan Holt who plucks her from her sinking vessel after he’s been assigned back to his old hometown in Alaska. Out on the most dangerous waters in the world, where a tumble overboard will stop your heart in five seconds, Dylan’s greatest worry is his returning feelings for Nolee, a woman who’s never left his heart or thoughts, no matter how far he’s traveled for his coast guard work. He plans to transfer stateside as soon as possible, and leave the stifling hometown that holds bad memories, but Nolee’s proving to be one sizzling temptation his body, and heart, can’t resist.

How did you come up with the concept and the characters for the story?
I’m addicted to Discovery Channel’s hit show THE DEADLIEST CATCH! I knew I wanted to set a book in this extreme setting but needed the right, high-octane story. When I saw an episode where a USCG Air and Sea Rescue team rescues a crab fishing crew from a sinking vessel, I imagined the ultimate sexy alpha hero- a fearless rescue swimmer daring and determined enough to fling himself into most dangerous waters in the world to save others. Of course, then I needed a heroine strong enough to go toe-to-toe with such a tough guy and who better than a headstrong, fearless crab fishing boat captain whose staked her claim in this testosterone-charged world. I wanted them to be second-chance lovers with lots to lose by risking their hearts with each other again. Putting them on a boat together in a life-and-death adventure, where they can’t resist their sizzling chemistry, made this one of my favorite sexy romances to write of all time.

What gave you the most trouble with this story?
My biggest challenge was the painstaking research I undertook to ensure that I created an authentic experience for the readers in the unique world of crab fishing on Alaska’s Bering Sea. In addition to watching lots of THE DEADLIEST CATCH episodes and videos of USCG Air and Sea rescues, I fact checked with USCG Commander Bill Friday, a Jayhawk pilot who was stationed for several years in Kodiak, Alaska and one of THE DEADLIEST CATCH’S captain’s THE TIME BANDIT’S Jonathan Hillstrand. He provided the kind of insider details that helped me convey an unforgettably sexy romance set on treacherous waters.

Excerpt:
How she wanted him…
“We’re older now,” Nolee whispered.
“Wiser.” One eyebrow rose. Dylan’s hands settled on the outside of her knees and skimmed their way up her thighs, pausing on her hips.
“We won’t make the same mistakes we made before.”
“So you’re saying…”
The force of her need for him shook the fingers she slid up his biceps. What would it feel like to have this officer obey her every wicked whim? If she was in charge, surely she wouldn’t be as vulnerable… in danger…of giving him everything, including her heart.
“I can’t fight this, Dylan.” The fire he’d ignited inside her two weeks ago, the one that continued to smolder, could no longer be contained. The sensual flames licking over her flesh confirmed her assessment. “If we keep things physical only, we can indulge a little while you’re here.” Her eyes dipped to his hard, handsome mouth.
“We shouldn’t waste the time we have left together.” 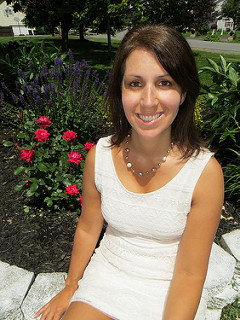 Award-winning author Karen Rock is both sweet and spicy—at least when it comes to her writing! The author of both YA and adult contemporary books writes red-hot novels for Harlequin Blaze and small-town romances for Harlequin Heartwarming. A strong believer in Happily-Ever-After, Karen loves creating unforgettable stories that leave her readers with a smile. When she’s not writing, Karen is an avid reader who’s typically immersed in three different books at a time, all in different genres. She also loves cooking her grandmother’s Italian recipes, baking, Christmas (no need to specify—she loves every bit of it), and having the Adirondack Park wilderness as her backyard, where she lives with her husband, daughter, dog and cat who keep her life interesting and complete. Learn more about her at her website.

During this tour there is a giveaway to win a $25 gift card and a print copy of Uniformly Hot! HIS TO PROTECT. For a chance to win, enter the rafflecopter below:
a Rafflecopter giveaway

Have you read a book that took place mostly on a boat?

10 responses to “Review: His Last Defense by Karen Rock”