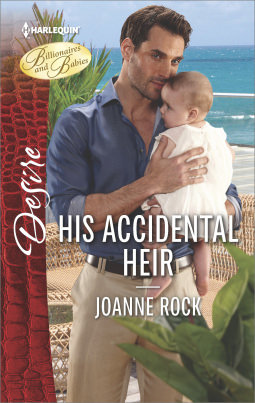 His Accidental Heir (The McNeill Magnates #3)
by Joanne Rock

When resort developer Cameron McNeill goes undercover to root out problems at his prized island property, his first discovery is the irresistible concierge, Maresa Delphine. Her business smarts are vital to his mission. But the struggling single mom could help with his personal mission, too: fulfilling the marriage terms of his grandfather’s will.

Maresa is overwhelmed caring for her infant niece and tending to the demands of the resort’s sexy mystery guest. When he reveals himself as the owner, she’s thrown for a loop. But when he proposes…can she resist his brand of trouble in paradise?

I’ve been enjoying this series so far, so I was looking forward to this third book that follows the last brother Cam and meeting the person he’ll fall in love with. This was a great read, it was easy to fall into this story and I enjoyed seeing these two fall in love.

His Accidental Heir features Cam, who has always been the most impulse of the three brothers, although now that we actually get his point of view, he did seem a bit less so. But at the same time I felt like we got a better view of him less overshadowed by that one personality trait, but it was still there. I wasn’t sure if I would enjoy Cameron because of his impulse action in the first book, but I was surprised by how loving and caring he could be. He was so good with Maresa and caring for her family as well. And I liked how at the end of the book he realized a broadened meaning of the term family was a good thing. I also liked the dog who Cam was caring for in this book.

Maresa is the female main character here, she was a very capable character who worked hard and cared very much about her family. There’s a instant attraction when she meets Cameron, but it takes a while before they act upon it. She has had a tough life and now an infant is dropped in her lap and I was impressed she handled it all so well and stayed caring and nice.

There is a tad of forbidden romance as he’s technically her boss, besides that there’s very little drama or conflict, which was nice. I did roll my eyes when Cam made the same “mistake” as his brother’s did in the previous books. It just got a bit old and I had rather seen another plot point used as conflict.

I enjoyed this book. It was fun to see a short scene at the end where we saw the other brothers and their wives. I had hoped to meet the “other” McNeill’s in this book, but that wasn’t the case. I am happy to hear they all get their own book and this book will get 3 more books. If you’re looking for a good solid romance with great characters I would recommend this series.

To summarize: this was another good book in this series. I liked getting to know the third brother, Cam. I wasn’t sure if I would like him because of something that happened in book 1, but I was pleasantly surprised by his character and how nice and caring he was. I also liked Maresa, she has a lot going on, but she handled everything well and stays nice and caring. I liked reading about these two falling in love, although I didn’t really care for the conflict as it was basically the same conflict point the previous two books used. But overall this is a fun series with solid romances and I am glad there will be 3 more books.

Tell me about a book were you didn’t like the character as much till he/she got their own book?

12 responses to “Review: His Accidental Heir by Joanne Rock”