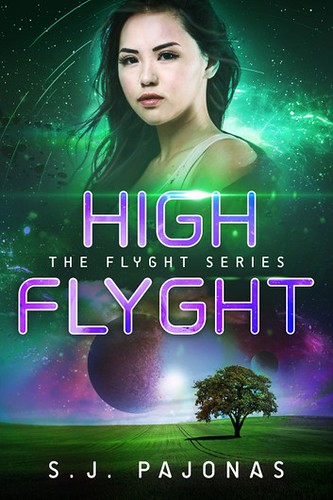 Blurb:
A sister betrayed. A discovery of contraband. Can she save her family or will she crash and burn?

Vivian Kawabata won’t rest until she reverses her family’s unfortunate lot. Still fuming over her brother’s betrayal, she struggles to rustle up a few more eligible men for her anemic relationship network and a medic for the crew before someone dies on her watch. But she thinks her luck is finally beginning to change when they uncover her conniving brother’s stash of valuable superhero seeds.

Hoping the plant’s mysterious powers can buff both her crew and her bank account, she races to turn the crop into cash. But when her alluring ex, Ken, returns, managing her bedroom threatens to steal her focus. With old wounds reopening, jealous competitors, and dangerous side effects, Vivian fears for her life… and her heart.

Are she and her newfound network doomed, or can she finally chart a course for success and love?

Wow what a read this was! There was so much happening, so many twists and turns. I just wanted to keep reading and was sad when I hit the end as I wanted to know more. What’s going to happen next to these characters and how their lives are continuing after these twists that shook things up and if Vivian will get together with Gus or not.

This series continues to be so good! There is so much happening in this book, most of the ongoing plot lines make major progression. There were so many reveals, twists and new discoveries and directions. There really isn’t a dull moment. There are the seeds, the search for her brother, the relationship network, the people who looking for her brother, the journey to buy back the farm, the whole ship and Flyght, a new mystery with another shipment and more. It kept my attention from start to finish and when it ended I just wish I had the next book already as I wanted to read more.

I love following Vivian’s journey. Things aren’t easy for her and she again hits several low points and trouble she has to deal with, but there also are enough bright moments. She’s a great main character, she has a lot to deal with, but she keeps standing. She tries to do what she thinks is right and at times she might not always make the best decisions and I wish she would fully trust her guys, but it’s all realistic and logical. I think it will take time for her to fully realize she can depend on her guys and they’re stronger together and slowly I think she’s getting there.

I really love seeing the romance and the relationship network develop in this one. While in book 1 we only saw Ken and in book 2 only Jinzo, in this book they’re all together. They have to figure out how to make things work and things are awkward for a bit, but I loved seeing them figure things out and how they both care so much about Vivian. There were some great scenes with them all together and also scenes with just Vivian and one of her guys.

In book 1 I wasn’t sure about Ken, I just didn’t fully feel their romance, but this book really is about Ken. We find out why they broke up at first and later find out exactly what Ken went through then and how he dealt with things. It all makes so much more sense now. I feel like I got a better feel for him and the depth of his feelings for Vivian. I really grew to like him in this book. I also loved seeing how he and Jinzo interacted. There is still plenty of Jinzo in this book, although a bit less than in book 2. And while the romance is an important part of the book there is so much going on besides that as well.

The characters are one of my favorite parts of this book. The whole crew is so interesting. There also is a new crew member they add in this book, a medic. There are some sparks between him and Vivian and I wish Vivian would go for it, but there are things in their way. I kinda like it that he doesn’t have the same prestige and value as the other guys and I really hope he will be part of Vivian’s relationship network. It’s clear he really cares about her and he seems competent and capable as well. Thanks to the authors casting inspiration post I also could easily visualize how he looked.

Besides that there is the usual crew of Skylar, Marcelo, Carlos and Lia. All of them play and important role and has something going on in this book. There’s a twist involving Marcelo. A new direction for Skylar. Carlos has an important role, especially later on in the book with what’s going on with the ship. And Lia has some nice scenes as well, especially involving the animals. And the AI named Ai, I like her personality, although there’s less of that in this book as there’s something going on with her in this book. And I really want to know how that gets resolved. Then there are all the animals on the ship as well. Vivian’s dog, as well as sheep, goats, alien squirrels and more who live on the spaceship.

I also enjoyed seeing more of the Rio wildlife, we see more of the strange plants that grow there and even get a glimpse of how they work. And there are some more scenes with the creepy alien animals that live there. It really comes to life and I could vividly visualize that scene with all the strange animals and plants around.

To summarize: This was an excellent third book in this series. There’s so much going on, lots of plot lines that continue and progress, changes and important scenes with the characters, the romance that develops and expands. It was awesome. There are some great twists and reveals in this book. There’s so much going on and I wish I had book 4 already as I want to read more. This series is amazing and I love following the adventure of Vivian, her lovers and the crew. There are some interesting developments on the romance front in this book, we learn more about Ken and I grew to like him a lot more. And Jinzo and Ken are both on the ship with Vivian in this book and I enjoyed seeing how they all tried to make it work. The whole group of side characters is a lot of fun to read about and they all have their great moments in this book. I am really curious about Gus and want to know if he joins Vivian’s relationship network. There’s also more we see of the alien plants and animals in Rio, which was so well done. This world really comes alive. I love the characters, the story, the romance and the world. If you like sci-fi romance books, you don’t want to miss this series.