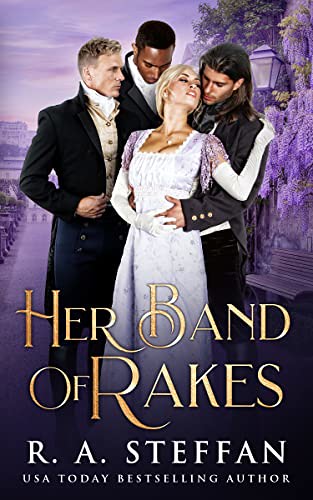 Her Band of Rakes
by R.A. Steffan

Blurb:
Exiled to the country after a devastating London scandal, Cassandra Fenwicke’s prospects for marriage and a secure future have become increasingly bleak—and that was before she ended up stranded in the infamous Lord Rotherdam’s remote mansion.

Now, she’s trapped with three dangerous and alluring men in the viscount’s notorious den of iniquity. Beyond the walls of Hengewick House lies a joyless future of destitute spinsterhood. Within lies temptation—but Cassandra already knows what happens to young women who give in to the wicked desires of powerful men. She bears the scars, both to her mind and her tattered reputation.

Can three unrepentant rakes with a mission change Cassandra’s mind about what it means to be ruined?

Her Band of Rakes is a steamy Regency reverse harem romance by USA Today bestseller R. A. Steffan. If you’ve ever watched a certain popular Regency TV show and thought, “This needs more polyamory and smokin’ hot group sex,” well… you’re in luck. Here’s 97,000 words of it, all tied up with a neat HEA bow.

I don’t read a lot of historical romance, but when I heard RA Steffan was writing a reverse harem/ polyamory historical romance I knew I had to read it. This was a great read! Her Band of Rakes has a solid story as well as plenty of steam and romance. Cassandra’s future is looking bleak as she gets exiled to the country after some London scandal. On the way there she and her maid get attacked by highwaymen and end up getting helped by Lord Rotherdam and his friends. Cassandra and her maid can stay at his house while they recover, but this might lead to even more scandal as Rotherdam doesn’t have the best reputation.

I liked how the author wrote this book. It has a solid story surrounding Cassandra’s past and what happened in London. She’s quite hurt by it and has to overcome the trauma it caused her. It even gets quite tense later on in the story and I kept wondering how Cassandra would get to live the life she wants. The romance and story elements are well intertwined and it made for an enjoyable read. I did lose a bit of interest later on in the book, but I am not sure if that was due to my reading mood suddenly switching to cozies or the rather long length of the book and at times a bit slower pace.

I liked the romance, I did think their feelings grow quickly, but the depth of their feelings is clear. Cassandra spends time with Edmund and Robert mostly while she’s staying at Lord Rotherdam’s house. She falls for them and enjoys their company. Later in the book Lord Rotherdam gets added to the mix as well. There’s a bit of MM too as Rotherdam and his valet Robert have feelings for one another. There is a bit of conflict, but I liked how this was mostly from outside of the romance. I liked how each of the guys have their own personality and a bit of depth and a past. Although I would’ve liked to get to know Lord Rotherdam a bit more, he only gets added to the romance later in the book and I would’ve liked to see a bit more of him.

I liked Cassandra as a main character. She is clearly bound by the expectations of society and struggling with some trauma and I liked how the story progressed and we see her find her own way. I liked how she dealt with the things on her way and especially later in the book doesn’t just accept things because society expects them to. Nevertheless she still realizes when it’s easier and better to handle things along societal norms at times and bend them to her benefit. I liked the addition of her maid Mary as well as the side characters like Frances.

To summarize: This was an enjoyable historical romance book with a polyamory relationship. I liked the way this one has a solid story as well as romance. There were a few parts that kept my attention less, but that might be because of my weird reading mood. The romance with two of the guys developed a bit fast, but it was clear they really cared for one another. I would’ve liked to see a bit more of Rotherdam who was only added later. Each of the guys has their own personality and some depth and a past, although I would’ve liked to see some of that explored a bit more. I liked the way Cassandra dealt with the trauma and the things in her way and how the guys helped her. I liked reading about these characters and there are some likable side characters as well.

6 responses to “Review: Her Band of Rakes by R.A. Steffan”