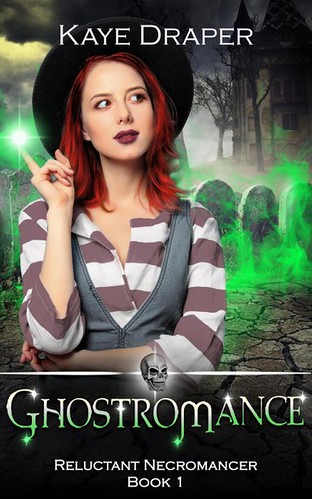 Weird. Creepy. Frumpy. Boyish. At the young age of twenty-nine, reluctant necromancer Esper Jones is an outcast, labeled “the old witch on the hill” and avoided by all sane residents of the tiny village of Hellsfork Michigan. And that’s just fine with her. Dealing with people has all the appeal of poking her own eyes out.

But Esper’s quiet world is upset when a strange, beautiful man named Toma blows into town and destroys the walls Esper has carefully built around herself. Esper has never met another supernatural before, and she finds herself oddly drawn to the pretty medium who claims he can speak to ghosts.

Drawn into the medium’s crazy enthusiasm for rescuing people who are already dead, Esper finds herself traipsing through cemeteries and using the curse she has always hated to wake the dead and ask for answers. Because the ghosts of Hellsfork are restless, and only Esper and Toma can help put them to rest.

What caught my eye about this one was how the author described it as not your typical Reverse Harem read. That’s definitely true and it’s probably my favorite part of the book. While still following some of the common tropes in the urban fantasy, paranormal romance and reverse harem genres, this book was quite unique as well as it differed in a lot of ways too.

Ghostromance follows the story of Esper. Esper basically fits the old witch on the hill image, except she’s not that old yet, she’s in her late twenties. She is a necromancer, but knows very little about her powers, she just mostly tries not to use them. She doesn’t like interacting with peoples and stays at home when she can. She also is absolutely hideous if we can believe her own opinion, which was refreshing at first as she wasn’t beautiful and looked quite boy-ish, but after a while I admit I got a bit annoyed with how often she made comments about her not looking nice or her clothes being ugly. It just was a bit too much in my opinion.

While I liked the introduction, after that I felt like I was just waiting to see where the story goes and while it is well paced, it still felt like not much happens. That also might be because of the short length of this book, it’s a novella and that made it hard to really get into the story. This might improve with book 2, but not sure if I’ll continue the series.

I have been in this weird reading mood and it feels like the books I pick up are just all missing something. That something more that can turn it into a great read. I am not quite sure what causes it. In the case of this book I think it’s just that the story never fully gripped me. It was fun enough, but had nothing that pulled me in deeper, made me really care about these characters or invested in their stories.

Having said that I did enjoy reading about Esper and Toma, I had expected their romance to develop quite quickly, but I was pleasantly surprised that there was a bit of build-up before things turned steamy. I did like Esper and Toma for the most part. Both were interesting characters and I like how they are both a bit different.

Who I didn’t like was Jazz. I am usually not a fan of the extrovert best friend who tries to get the introvert main character to be normal/ outgoing etc. And that’s exactly the type of character she was, it felt like she totally lacked any sort of understanding or compassion when it came to Esper and just wanted to change her to be normal. She is even downright rude multiple times. I think she might be important later on to some storyline as there are some hints that Toma drops that something’s up with her, but for now I just found her annoying and I honestly couldn’t fathom why she and Esper were still friends. It didn’t even seem like Esper liked her, it was more that Jazz stuck with her for so long she just stayed friends or something. It just didn’t work for me and it wasn’t interesting and I cringed every time Jazz showed up.

Compared to jazz, I found Toma’s acceptance of Esper’s weirdness refreshing and nice to read about. He liked her how she was and didn’t want her to change. I especially liked the comment when he sees her in a skirt and remarks he rather sees her in her usual clothes as she looks uncomfortable. I liked Toma, he was interesting and fun to read about. I also liked the romance so far, there was a bit of build up and mutual acceptance and they just seemed great together.

The paranormal aspect was interesting, while this book really only touches upon what exists in this world it worked well as introduction. It mostly focuses on Esper’s paranormal type namely necromancer and Toma who is a medium and can speak to ghosts. There also is a bit of a storyline related to the ghosts that I think will continue in future books. Toma explains there are multiple types of paranormals, but we don’t see much of the other types yet only hear Toma talk about them a bit. All in all the world building was well done for such a short read and I am sure it will be developed more in future books.

To summarize: Ghostromance caught my attention with the author’s note stating that this book is different from most reverse harem books. I liked how it was a bit different from most reverse harem reads. Esper is not your usual main character and I liked how she was a bit weird and while it was refreshing she wasn’t beautiful, I did think she thought or remarked about her lack of looks a bit too much. I liked her developing romance with Toma, he seemed like a nice guy and accepted her like she was. There is a bit of build-up before things turn steamy, but it’s limited to only one scene. I liked the two of them together. For some reason this book didn’t fully grip me, there was enough happening, but it just didn’t fully pull me into the story and get me invested in what would happen next. I really disliked Jazz’s character, she was annoying, didn’t respect Esper and even downright rude a few times. The paranormal aspect and world building was interesting enough, there isn’t as much we see of the world in this book as it’s pretty short and the focus mostly is on the necromancer and ghost talking abilities. All in all a decent start of this new series, it’s a unique reverse harem read, but it didn’t fully grip me.

Tell me about your favorite book with a necromancer?