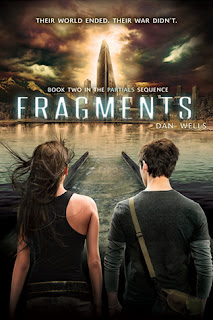 Blurb: Kira Walker has found the cure for RM, but the battle for the survival of humans and Partials is just beginning. Kira has left East Meadow in a desperate search for clues to who she is. That the Partials themselves hold the cure for RM in their blood cannot be a coincidence–it must be part of a larger plan, a plan that involves Kira, a plan that could save both races. Her companions are Afa Demoux, an unhinged drifter and former employee of ParaGen, and Samm and Heron, the Partials who betrayed her and saved her life, the only ones who know her secret. But can she trust them?

Meanwhile, back on Long Island, what’s left of humanity is gearing up for war with the Partials, and Marcus knows his only hope is to delay them until Kira returns. But Kira’s journey will take her deep into the overgrown wasteland of postapocalyptic America, and Kira and Marcus both will discover that their greatest enemy may be one they didn’t even know existed.

The second installment in the pulse-pounding Partials saga is the story of the eleventh hour of humanity’s time on Earth, a journey deep into places unknown to discover the means–and even more important, a reason–for our survival.

My Review:
After reading Partials, I couldn’t wait to find out what would happen in Fragments. Fragments is almost just as good as Partials in terms of world building and plot, but the slow pace is something that bugged me, especially because this book is very long compared to what I normally read.

Fragments starts off slow, really slow paced. I had some difficulties getting into the story, because nothing really seemed to happen at first. I did like the multiple point of views and think they added something more to the story, especially because Kira usually is not on Long Island and we still get to know what happens there. The plot is great, like a well thought through plan that slowly unravels. I liked learning more and every new discovery was done great, although sometimes it was waiting too much on the next big discovery and there are long stretches of story where the pace is slow and not enough happens. I did struggle to get thorugh this, but one day filled with reading got me around 75% and at that point it got really good.

Actually the end of the book is the best, filled with huge discoveries. And even though a few of the smaller revelations didn’t came as a surprise, there are a lot of surprises too. The plot is really intricate and the actions of the humans that led to this all are very believeable and it is so thought through.

Just like with Partials I think there wasn’t enough character development and character depth in this book. While the story is great, sometimes I just wished I knew more of the characters. Feel their emotions better and be better able to care about them and while I really like Kira and Samm, I still want to know more about them. For me there just isn’t enough about the characters, but the great story makes more than up for it.

The world building is something that I love about this book. Even though sometime no big revelations are revealed there is almost constantly world building. There are so many descriptions about the world, how things changed and how cities look like now. The world really comes alive and there is a reason and explanation about everything. And then the big revelations at the end are all explained so well and everything makes sense, like a puzzle where everything fits. The world building is done really well and sometimes it all makes so much sense and feels so real I could almost believe that this can be our future. And there are things that really could happen, it is a bit frightening at times, it all really makes sense.

To conclude: despite a slow start and overal slow pace Fragments is just as good as Partials. The story is great and I love how everything makes sense and while the pace is slow the story is still interesting enough to keep reading. I think that there is too little attention for the characters, but the characters are likeable. The world building is done really good and the world really comes alive with all the descriptions. All the explanations make so much sense, I can almost believe that this can really happen.

You can add Fragments to your to-read list on Goodreads

You can buy Fragments here:
– Amazon
– B&N
– Kobo
– The Bookdepository