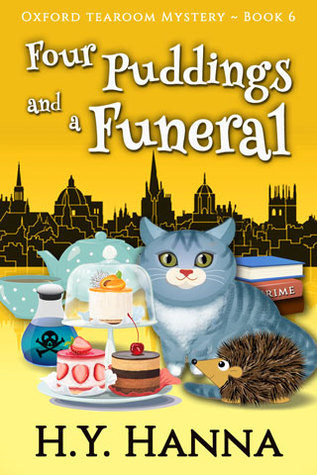 Blurb:
Business is going well at Gemma Rose’s quaint English teashop and she’s delighted about her first big catering job at a local village funeral… until the day ends with a second body and one of the Old Biddies accused of murder! Now the resourceful tearoom sleuth must find out which delicious pudding contained the deadly arsenic—and who might have wanted the wealthy widow dead…
But Gemma has other troubles to contend with, from her naughty cat, Muesli, running loose in her tearoom to an unexpected hedgehog guest in her home—and that’s before the all-important “meet the parents” dinner with her handsome detective boyfriend turns into a total disaster!

With so many things on her plate, can Gemma solve the mystery in time to catch the murderer or will she come to a sticky end?
(* Sticky Toffee Pudding recipe at the end of the story!)

This is one of my favorite cozy mystery series so every time a new books releases I happily dive in. This was another great book in this series. really if you love a good cozy mystery with fun characters ad great mysteries I can’t recommend this one enough. It was fun to see Gemma get involved in another murder mystery, along with some other side plot lines that are going on.

It was a great mystery! I always like the poison mysteries, not sure why, but they are fun to read. You don’t only have to figure out who the murderer is, but also have to keep in mind how they could’ve gotten hold of the poison. After reading one third or so of the book I sat down and picked my suspects, I came up with three likely candidates. One of them turned out to be a red herring later in the book and another scene with another suspect made me doubt that one too. I was almost ready to put another character on my list as suspect, but it seemed the third option was indeed the murderer. Although I hadn’t quite figured out the why yet. Which was a nice twist when that came to light and all the pieces fell on it’s place. It was a good mystery with lots of possible suspects and some nice twists and turns.

Besides the mystery there’s also other things going on, like Muesli who is bored staying at home, a cute prickly friend that Gemma meets, the old biddies who are getting involved again, Gemma’s mother who lost her ipad, Gemma’s mother who is still up to her matchmaking ways, some trouble in with the romance, Cassie has a potential buyer for one of her paintings and even Caitlin the main character of this author’s other series made an appearance. It’s all balanced nicely, with the focus being on the murder, but enough other things going on as well.

I always like seeing how Gemma gets involved into the mystery and tries to help, although a few of her attempts to get answers seemed a bit too direct, it was entertaining to read. I didn’t quite care about her romantic struggles with Devlin, it was a clear case of miscommunication and while I understood their issues I just wanted them to talk things through a bit more. I did like how things got resolved towards the end. It was nice to read that scene.

To summarize: This series is a lot of fun and this was another great installment. I had fun trying to figure out the mystery and one of my three suspects turned out to be correct. There were some nice twists and turns, red herrings and surprises that came to light during the investigation. And while I predicted the who right I couldn’t figure out the why, so that was a nice to find out everything towards the end and have things fall on it’s place. Besides the mystery there are some other side plot lines going on, which add to the book. I liked reading about Gemma her adventures in this book. I didn’t care as much for the romance drama, but I did like how things got resolved at the end. All in all this was a great read and I am already looking forward to the next book!

Tell me about a longer runner series you’re following?

8 responses to “Review: Four Puddings and a Funeral by H.Y. Hanna”