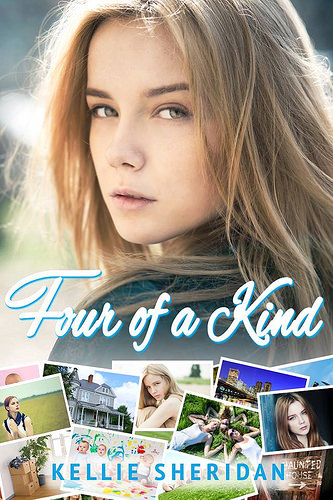 Blurb:
The odds of giving birth to identical quadruplets: 1 in 13 million.

The population of Fairview, a town where all anyone talks about is the Fairview Four’s return after fourteen years: 47,327.

The chance of Reagan meeting a guy who sees her as one of a kind: better than she thinks.

Following in her sisters’ footsteps—and, all too often, their shadows—is nothing new to Reagan. But a disastrous first day at Fairview High forces her down a new path, one that could lead to seeing herself as more than just someone else’s sister. Things aren’t going as smoothly for Reilly, Reece, and Rhiannon though. How can Reagan let herself be happy—or dare to fall in love—when she may be the only one who can bring her family back together?

Sisterhood of the Traveling Pants meets Gilmore Girls in the first novel of a heartwarming new series about first loves, family, and finding your way.

After reading the prequel novella I was excited to dive into the first book in this series. There was a lot to enjoy and I easily breezed through this book, but I also had some issues with it. In the end I think I actually enjoyed the prequel novella more, which seems so weird to say. Four of a Kind follows Reagan, she and her three sisters just moved back to the town they were born in. It’s going to be a difficult adjustment for them, new town, a new house, a new school, new friends etc. Reagan didn’t mind the move as much and she seemed to enjoy being there. While the others struggled a bit more to adjust.

So after reading the prequel novella Reagan was pretty much my favorite of the four characters, but in the prequel we got all four point of views. Here we only get Reagan her point of view and she seemed somehow more normal and less quirky than in the prequel novella. She seemed to be a pretty normal teenager, not that there is anything wrong with it, but I kinda had hoped for something more. Overall I enjoyed Reagan her story and it was also kinda nice not to switch back and forth, but at the same I kinda missed having the other three point of views as well. I know I am contradicting myself. In the prequel novella the focus also was on the upcoming move, while here it’s mostly on normal school life, which gave a very different tone to the story.

Reagan is the quiet one of the four, she likes to play games and read books and isn’t all that social. But she actually does pretty well making a new life for herself and she even finds a boy she likes. This book mostly focuses on Reagan her daily life, going to school, making new friends, trying to fit in somewhere, worrying about things and along the way she develops a crush on a boy. But I wouldn’t categorize this as a romance book, as it’s mostly a sub plot. It’s this cute and slightly awkward romance, but it only really progresses towards the end. And I never felt like I really got to know Kent or saw enough of them together to form a good opinion of them as a couple. And then the ending was kinda rushed, skipping weeks at a time and I just wish it would’ve slowed down to see more of their relationship. I wasn’t too happy with how it ended, but I am curious to see the other sisters their story and this book does provide a good foundation for their stories next. I wonder who will narrate book 2?

The pace of this book was well done and it kept my attention. There is little drama, but a bit of teenage angst. I did think it was well written and Reagan come across as a typical teenager, I guess I was just a bit disappointed she didn’t show more of her own unique personality. Like I mentioned before, the ending felt a bit rushed, not only when it related to Reagan, but also to some of their sisters. Some big changes are mentioned, but we didn’t get to see anything about that. And it felt like there was more story there that we didn’t get, but maybe we’ll get that in later books? Now it just felt a bit rushed and like we were missing parts. This was a fun read and I did enjoy it, but it felt like there was something missing that could’ve made this book even more enjoyable for me.

One of my favorite parts of this book was the whole concept of the quadruplets. It just seemed like a fun set-up for a book and I did enjoy that part. Although at the same time this is also decidedly Reagan her story. I was glad I read the prequel novella as I had a pretty clear idea of everyone’s personality thanks to that. I liked seeing glimpses of the sisters their personality in this book, although it was less clear than in the prequel novella as we only get Reagan her point of view, but I still felt the author did a good job giving us an idea of everyone’s personality. The sisters don’t always communicate much with each other so we only get pieces of the other sisters their stories. I had hoped to understand a bit more of what they were going through, but I guess I’ll have to wait for their stories for that. I am looking forward to continuing this series.

To summarize: all in all this was a fun read. The quadruplets plot line made for an interesting touch, but mostly this is just a story about a teenage girl trying to fit in at her new school. There is very little drama, but a bit fo teenage angst. I wish we could’ve gotten more of the other sisters their stories, but I guess I’ll have to wait for the later books for that. I really enjoyed this book and at the same time I had hoped for more? Reagan seemed pretty normal in this book and less quirky. But I did think the author got the teenage voice well done as she did sound like a teenager. And I liked how each of the sisters had their own personality. Overall I would recommend this book to those who like a good YA contemporary book with a little bit of awkward teenage romance and an original touch with the focus on quadruplets.

What’s the best book you read that features sisters?

8 responses to “Review: Four of a Kind by Kellie Sheridan”