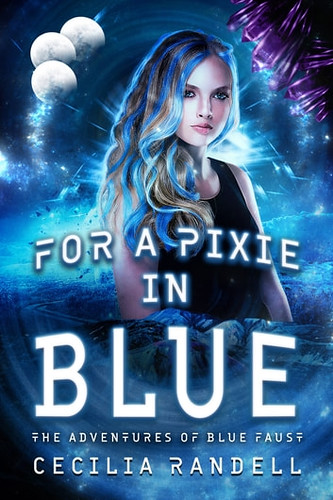 Blue Faust is trapped, and there are no good choices. Does she remain on Padilra, giving up her own dreams, or rebel and risk starting a war? How is a person supposed to make a choice like that anyway?
Forrest and Mo’ata are by her side, of course, and the others insist on accompanying her as well.

She’ll need to learn to navigate the politics of an entire Alliance, as well as the culture of a people who have isolated themselves for a very good reason.

And what do you do when you find out the monster you’re guarding isn’t the scariest thing around you…?

***This is a reverse harem story. There will be some sexy times, swearing and violence. You know, the good stuff. You have been warned.***

I am really enjoying this series so far and this was another great read. In For a Pixie in Blue the characters visit a new world, but they’re kinda stuck there for reasons, which made the first part a bit less interesting to read. The pace picks up later and there is still plenty of character development and some romance progression too which all develops at a slow, but steady pace. I enjoyed spending time reading about Blue and the men around her.

This book was a bit slow at first, for how fun it was to visit a new world and see everything about the new culture it kinda slowed down once they got settled and couldn’t do much. There are hints and clues of something being up and going on, but it takes a while before things start happening and progressing. There is some slow progression in terms of romance and characters along the way, but the real excitement comes later in the second half of the story. That part was really good and I was excited to see how everything would play out. I felt this story line with the crystals and Philip got dragged out a bit too long, but I liked the resolution and the way things got wrapped up toward the end. I thought that part was well done and was interesting to read about.

Besides the main plot there are some nice character related developments. Blue is learning some new skills, Levi improved his English and they can now communicate, Blue’s prida is slowly growing, the other men around her are sticking around and showing their dedication. Then there are the cubs who are adorable. I really like reading about all these characters and seeing the bonds between them deepen. Blue’s prida (the word they use for harem in universe) grows in this book and it was great to see her romance deepen with some of the men. I really liked how she can communicate a bit now with Levi and I thought this book showed a lot more of his character.

Blue is a great character to read about. I like how realistic she feels and I like her outlook on things. I felt bad for her as she struggles with being stuck here in this book, but then there are some great happy moments as well. I like seeing how she deals with things and how she communicates with her men. There are some awkward scenes or moments she overthinks things and it just makes her feel so real and relatable.

World building wise I like this series for showing different worlds and cultures. They get to visit a new world in this book and I really enjoyed getting a feel for the people and culture here.

To summarize: this book was a bit slow to start, but gets more engaging later on. I really liked seeing the character development and romance progression in this book. As well as getting to visit a new world. I felt the plot with the crystals and Philip dragged on a bit and there wasn’t as much happening early in the book, but the later half was a lot better and I liked how this part of the plot line got resolved. Blue is a great character to read about, she feels real and relatable and I like seeing her outlook on things. I liked seeing her bond grow with her men and some of the romances progress. I was happy Blue and Levi can now communicate and I felt we got to learn a lot more about his character in this book. After the way this book wraps this part of the plot up I look forward to the next adventure!

2 responses to “Review: For a Pixie in Blue by Cecilia Randell”