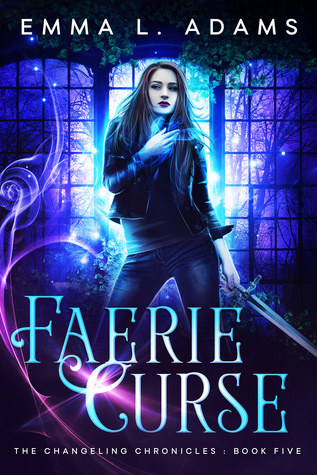 Blurb:
When the leader of the local witch coven is murdered, all evidence suggests foul play of the faerie variety. With group of anti-supernatural assassins running around town, I have to figure out their connection with the dark faeries before my best friend Isabel, the new coven leader, becomes the killer’s next target.

Nobody ever crosses the witches and escapes unscathed, but with the ancient Sidhe, all bets are off. I need to have my wits about me, otherwise one mistake might spell the destruction of our world.

I’ve enjoyed the Changeling series so far and am always looking forward to the next book. The start of this one was a bit slow, but eventually it picked up pace and it keep my attention from that point. This series is pretty predictable, each book has the exact same set-up, but at the same time it’s kinda nice to start a book knowing what to expect. And each book is still an enjoyable story.

This book focuses a bit more on the witches, but also adds an interesting piece of world building we didn’t know about yet. There is a bit of history tied in with current events. I also liked how the plot in some sense was a progressing of a plot line set-up earlier and I am not sure yet if the plot line has fully ended in this book.

Like the rest of this series this book is packed with action, danger, magic and paranormal. It’s fun to see Ivy land into a new problem this time and how she tries to fix it, with Isabel and Vance by her side. Vance and Ivy are a pretty stable couple and while the focus isn’t on the romance at all, I do like seeing these two together, working side by side.

I like seeing Ivy in action, it seems with each book she learns a bit more about her magic and I liked how the big battle at the end got resolved as it was a bit different than in other books. I also liked the plot line surrounding the forest and liminal spaces and wonder if we’re going to see more of that in later books.

There isn’t much to say about this book that I haven’t said in previous reviews. This is the type of series that gives you more of the same. An adventure and a plot line in each book, but the same feel and progression in each book. But I mostly consider this a good thing, the books are a bit predictable, but still enjoyable to read. So if you enjoyed the previous books you most likely will enjoy the later books as well.

To summarize: this was another solid installment in this series. Ivy gets involved into another issue that’s going. There is a bit of focus on the witches in this book and there are some interesting pieces of world building that get added. It was a solid read that kept my attention, although the start felt a tad slow. It’s a bit predictable in the sense that each book in this series has the same set-up, but I don’t really mind as it’s nice to know what to expect sometimes and each book is a good read. This is a fun series with a lot of action and magic.