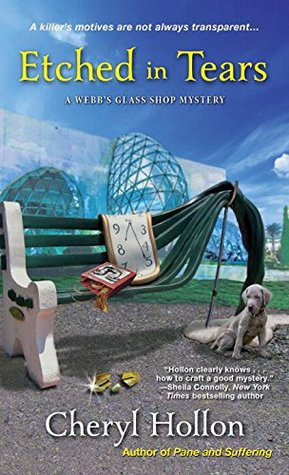 Blurb:
When a famous glass artist is murdered at his own exhibit, deadly secrets are put on display, and it’s up to glass shop owner Savannah Webb to see through a killer’s cover.

Celebrated glass artist Dennis Lansing is returning to St. Petersburg, Florida, for an exhibit at the world-renowned Salvador Dali Museum. His unique style of embedding document images in his art is at the vanguard of contemporary glasswork. But as Savannah’s first boyfriend and a former apprentice to her father, Dennis’s return home has her reflecting on the past–a trip down memory lane that takes a dark turn when Dennis is found murdered at the museum with an old reference letter from her father in his pocket. A search through her father’s records sheds new light on Dennis’s history, but it seems his present life wasn’t so transparent either. Now, with a gallery of suspects to consider, it’s up to Savannah to figure out who fits the mold of a murderer.

Etched in tears is the fourth book in the Webb’s Glass Shop Mystery series. I really enjoyed the first 3 books and was eager to dive back into this series. Etched in tears was a great installment in this series. It had a good mystery, we see the familiar characters again and it was just all around a great read.

Etched in Tears starts with an art exhibition that Savannah is attending, not long afterward the artist is found dead. Savannah knew him and because of the art connection she is asked to consult for the police. The mystery was very well done. At first it seemed difficult to really make sure who was a suspect in this case. Then slowly more people became possible suspects. Eventually I decided on who I thought was the suspect and I was happy when my guess turned out to be correct. I liked how the mystery progressed and how everyone was involved in solving it.

We not only get the point of view of Savannah, but also some chapters from the police officers their point of view. I think this really added something and I liked getting to know those characters a bit better as well. It’s fun how Savannah works closely together with the police and it’s obvious the police are also doing their work. They nicely complement each other with Savannah focusing on the art angle and the police doing a lot of the rest. I am really happy the police seem so competent in this series and do their part in the investigation as well.

It’s great to spend some time with all the by now familiar characters again. Jacob, Amanda and Edward all are present again and I liked how they all helped with the mystery. It’s a great group to read about, with each having their own personality and we see them develop a bit as well as the series progresses. There’s also a side plot line about the shop and classes going on as well and it was all nicely woven together. There is enough focus on the mystery, but we also get a feel for how things are going with the store.

The romance between Savannah and Edward also progresses and they hit a bit of struggle in their relationship. While the romance is a pretty minor side plot line, I do like seeing it progress and develop in each book. I felt their struggles and troubles were realistic and I also liked it never got blown up or led to much drama. I liked it when a romance is part of a cozy mystery like this. Edward and Savannah make for a nice couple.

To summarize: all in all this was another great read in this series and I was sad when I reached the end. The mystery was a good one. At first it focused mainly on the investigation and then slowly more and more suspects popped up. I eventually guessed who the murderer was and it turned out I was correct. The mystery progressed in a way that kept you guessing with more clues slowly surfacing. I liked seeing this familiar group of side characters again. The chapters from the police officers their point of view were a nice addition. I also liked how the romance made for a nice side plot line and their struggles felt realistic. It was a great read and this is easily one of my favorite cozy mystery series. I am already looking forward to the next book!

What’s your favorite glass item you own?

6 responses to “Review: Etched in Tears by Cheryl Hollon”