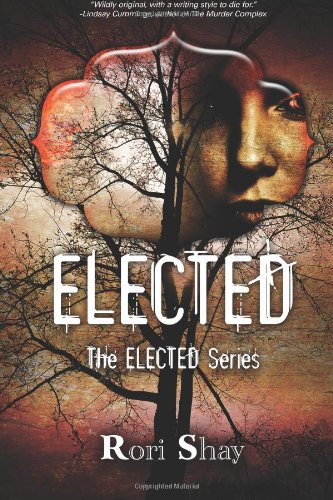 Once I read the blurb of Elected I knew I had to read it. I don’t read a lot of dystopia’s , but when I do I look for the original ones and Elected certainly did that aspect right. While it follows some common themes of dystopia books, Rori adds a fresh voice to the genre and makes Elected stand out.

Elected focusses on the story of Aloy, a girl who disguises herself as a boy because only males can be the Elected. I like the trope of people have to take on the different gender, it reminds me of Mulan and I loved that movie as a kid. This aspect already had me interested in this book, add to that political unrest, a marriage, some mystery and a dystopia society and Elected had a lot of interesting elements.

While this book is mostly story driven the characters played an important role as well. While I would’ve liked to get to know them better I could sympathize with them all. Aloy and Vienne are in such a unique situation, but I loved how the author handled their relationship. I liked how the author didn’t dance around the sex issue, but still handled it in a way that fit the story without too many details. I really wouldn’t like to be in Aloy her shoes, she has such a difficult task ahead of her and while she tries her best, it is still hard on her. I did like how the main character basically became the leader of a country, it added an unique perspective to the story. I really liked Vienne as well, she almost seemed perfect, although I would’ve liked a bit more insight into her real feelings. Griffin is a great character as well, although I did had some trouble get a good feel for his character. While all the characters where likeable I would’ve liked the time to get to know them better.

While I sympathized with all the characters I didn’t really feel the depths of their emotions or the romance. The romance is a side plot, but it did had important implications for the main plots as well. I liked how it all was handled and how the author made me connect with these characters even without too much focus on them.

What surprised me most about Elected was that instead of going into a future where science and technology are further then here they took the approach backwards. Technology had destroyed the world as we know it and try to stay as far away as possible. Another thing that was remarkable was how East country felt like on big family. There was the situation of the technology faction, but beside that they where still one country. I did had some trouble exactly envisioning where East country was and how big it was. I also thought that some of the Accords where a bit weird, why isolate the countries from each other, then they never know if the others also keep following the Accords. Some of them didn’t seem to make much sense, although I did get the logic behind it all. There was enough world building to give a sense of how the world was now, although there were also some things I would’ve liked to learn more about.

To Conclude: this book was exactly what I hoped it would be, a great dystopia book with an original twist. I liked the situation of a girl disguising as a boy and becoming the leader of the country and the story was done really well and carried the book. The characters where likeable, although sometimes I wished we had time to get to know them better. The world building leaves a lot of questions open, but still managed to sketch a feel of the world. The ending is pretty open and makes me want to read the next book and find out what will happen next!

You can Elected to your to-read list on Goodreads.