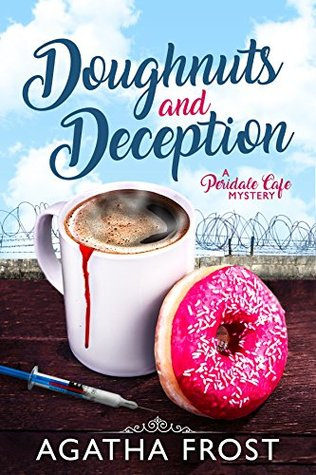 Julia never expected to be caught up in another murder investigation, but when she discovers that homeless people are dying suspiciously and the police aren’t investigating, she can’t sit back and do nothing. After promising her young lodger, Jessie, that she will do everything she can to help, Julia finds herself diving headfirst into the case, aided by her new Detective Inspector boyfriend, Barker. Sure there is a serial killer preying on the vulnerable residents of an old burnout warehouse, Julia must act quickly to get to the bottom of the mystery, but can she crack the case before more bodies turn up?

Book 3 in the Peridale Cafe Mystery series! Can be read as a standalone but will be enjoyed more as part of the series. A light, cozy mystery read with a cat loving and cafe owning female amateur sleuth, in a small village setting with quirky characters. No cliffhanger, swearing, gore or graphic scenes!

My Review:
I was in a cozy mystery mood so I decided to pick up the next Peridale Cafe Mystery and it fit my mood perfectly. I quickly finished this one and had a lot of fun reading it. It’s fun to follow Julia along while she tries to solve yet another murder. The plot in this one was slightly different and a bit less traditional cozy mystery plot line, but it totally worked here.

There has been a series of death’s among the homeless that the police isn’t paying attention to, but Julia is. She figures they are being targeted and is determined to catch the murderer. The police doesn’t see it as a problem as they don’t connect the deaths and thus won’t investigate, so she takes things in her own hands. Unlike most cozies there was no scene at first where you meat the person who gets murdered and the potential suspects. In fact only as the story progressed a few suspects came up.

While I wasn’t too surprised who turned out to be the murderer I was reading so fast through this one I didn’t take the time to figure it out. I was shortly thinking in that direction, but hadn’t pieced it all together. And the last clue that Julia uses to piece things together we only get to hear after she uncovers the murderer. It was a solid mystery and I liked how it was a tad different. With the police not investigating, the plot of the book developed a bit differently, which was interesting.

The books in this series are usually are pretty focused on the mystery, which is one of the things I like about them. But there are also some side plot lines, in this case one about Julia’s grandmother Dot and the homeless people. Then there are some plot lines that progress throughout the series like the romance between Julia and Baker, which had some interesting developments in this book. And then there is the plot line surrounding Jessie, which also had some great scenes that advanced that part.

To summarize: this series is a lot of fun to read, they are fast reads with a solid mystery and some great side plot lines as well. I quickly read through this book and it fit the type of book I was in the mood for. The mystery was a good one and I liked how it deviated a bit from the standard cozy mystery. The police didn’t investigate this time and only later on in the story some suspects popped up. I wasn’t too surprised by who the murderer was, but hadn’t figured it out myself yet. The side plot lines are great too and I like reading about the café, Julia, Jessie and the other characters. The romance also progressed nicely in this book. I hope I can read the next book soon!

Do you like books that slightly deviate in some small way from the standard books in that genre?

12 responses to “Review: Doughnuts and Deception by Agatha Frost”