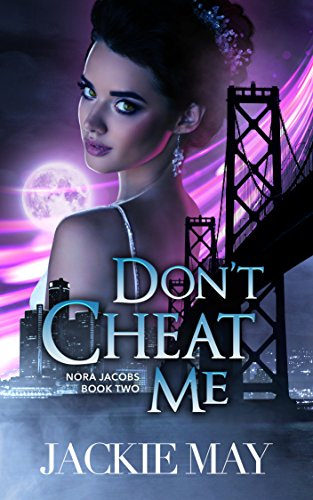 Don’t Cheat Me (Nora Jacobs #2)
by Jackie May

Blurb:
One month after Nora’s violent induction to the dangerous supernatural side of Detroit, she’s finally settling into her new life as the underworld’s token human. All she wants to do is mind her own business, enjoy her new friends, and stay safe. But that’s easier said than done when she’s such an enigma to everyone around her.

Thanks to her unique psychic abilities, she’s garnered a reputation for being mysterious and powerful. When the alpha of a local werewolf pack asks her to help him figure out who is stealing from him, she can’t say no, even though getting involved in pack business could have deadly repercussions.

While tangled up in a heap of werewolf troubles, Nora can’t quite shake her old vampire problem, either. Henry is practically stalking her, Parker is breaking down the walls around her heart, and Nora’s blatant fear of the blood-sucking monsters is a delicious temptation for the natural predators.

Nora’s succubus friend, Cecile, believes throwing her a “coming out” party into underworld society is the best way to solve all of her problems, but Nora disagrees. If the vampires and werewolves don’t kill her, Cecile’s party planning definitely will.

This is book 2 in the Nora Jacobs series and should be read after book 1. It is a slow burn reverse harem series.

Don’t Rush Me, book 1 in this series was one of my favorite reverse harem reads so far. And I have no idea why it took me so long to read book 2. Ever since Don’t Rush me, I’ve been buying every new book this author duo released, so the good news is I can binge through those now if I like. Don’t Cheat Me was a great sequel, I enjoyed seeing Nora find her way in the supernatural community in this book.

In Don’t Cheat Me main character Nora comes in contact with one of the local wolf packs. She meets what I think is another member for her harem and the packs asks her for her help. So Nora uses her special gifts to find out what’s going on. Then there is Cecile who is throwing a coming out party for the supernatural community. And there are some issues with vampires she has as well. Besides that she grows closer to several of the characters, although this is very much a slow burn romance.

I liked reading about Nora and how she handles herself in this book. I liked how she wasn’t instantly good at fighting and even tough she used some of the things she learned she wasn’t instantly able to win every fight. And the whole thing that she can’t use her power to often without feeling bad, seems interesting too. I also appreciated that at the end of this book we find out what supernatural type Nora is. I liked that we are kept guessing for a bit, but the secret doesn’t get dragged out too long, this felt like the right pace. And I am really curious about the next book now that she knows what she is.

The romance is very much a slow burn, but I like how she is growing close to several guys and the basis of the harem is there already. Even tough she only kisses some guys in this book, I feel like her bonds and attachment to her guys grow pretty strong already. Terrance and Oliver are still two of my favorites and I was a bit sad we don’t see as much of them in this book. There are some great Oliver scenes, even tough there werne’t many of them, the scenes we had were great. There are very few Terrance scenes sadly, he is there, but doens’t really have many scenes or interactions with Nora. I hope we see more of him again in the next book.

The focus romance wise is mostly on Rook, the new character and potential addition to her harem she meets. I liked Rook well enough, but didn’t fully care about the whole possessive wolf thing. Parker still rubs me wrong at times, but I am pretty sure he will be part of her harem and with her “curse” it sort of makes sense why he acts that way. I just hope he becomes a bit more likable. There is something that happens toward the end of the book with him and I am hoping that will help to make me like him more as it’s an interesting development.

I like how the harem develops in this series with her growing close to several guys, but not dating anyone yet. I am curious to see how it will develop in future books. I like how all the guys she meets are quite different from each other both in supernatural type and in personality so it’s easy to remember who is who.

The world building in this book mainly focuses on the werewolves, but there is also stuff about other supernatural creatures that we uncover. And I feel like we get a better feel for the whole supernatural community as a whole.

To summarize: I am really enjoying this series so far. It blends the romance and paranormal elements really well. And it’s great to see Nora find her way in the supernatural community and find friends who support her. This series has an interesting story and well done slow burn romance. I like seeing how Nora uses her gifts to help the werewolf pack. And at the end of the book we find out what supernatural type she is, which was great to finally know and I am curious to learn more. The romance develops quite a bit in this book too, even tough it’s still a slow burn. The depth of her feelings for several of the guys really grows and I feel that her harem is developing naturally, even tough she still isn’t dating anyone yet. It also was fun to learn a bit more about the supernatural community and mostly the werewolves in this book. All in all this was a great sequel and I hope to read book 3 soon.

Tell me about a series you already bought the next book of, but haven’t read yet?

4 responses to “Review: Don’t Cheat Me by Jackie May”