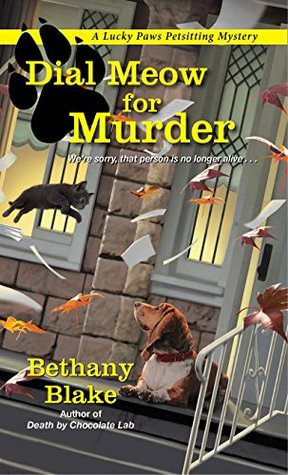 Blurb:
Even an experienced pet sitter like Daphne Templeton can be fooled by animal behavior: how can an adorably tiny fuzz ball named Tinkleston be capable of sudden flying leaps with cat claws bared? But human behavior remains even more mysterious, especially when Tinkleston’s owner is murdered on the night of a gala fundraiser for Fur-ever Friends Pet Rescue.

Accompanied by her unflappable basset hound, Socrates, Daphne plans to take charge of Tinks the Terror and leave the crime-solving to handsome detective Jonathan Black. But while luring the prickly Persian out of hiding, she uncovers clues that might take suspicion off her own mother. Maeve Templeton already has a reputation as a killer–in real estate. How far would she go to bag Sylvan Creek’s most coveted property, the Flynt Mansion?

To expose the truth, Daphne finds herself donning a deranged clown costume on an autumnal adventure that might just be crazy enough to work–if it doesn’t get her killed.

My Review:
I received a free copy of this book from the publisher through netgalley and voluntarily reviewed it

Earlier this year I read the first book in this series and I really enjoyed it, so when I saw book two on Netgalley I immediately hit request and started it shortly after I got approved for a copy. Dial meow for Murder is a lot of fun and I really enjoyed this book. I was excited to return to the town of Sylvan Greek and get to spend some time with Daphne, Socrates and all the fun side characters.

This book is set around Halloween, which was a fun touch and features a few Halloween themed events as well. And some Halloween themed pet treats for which the recipes are at the back of the book. It was fun to see this town during Halloween and ofcourse the animals all play a role as well. I love how big a part the animals play in this series. There are many scenes with animals in them and a lot of the focus is one the animals, which is great. Socrates is great to read about and I like how we get to see him a lot and what he thinks of this by how Daphne interprets his expressions. There’s also a new pet we get to meet and I have to admit Tinkleston grew on me as the book progressed.

The murder mystery was so well done. For a long time I really had no clue who the murderer was, I just followed Daphne along checking out her latest hunch. I think the mystery was smartly written with how almost no suspects gets cleared of the list fast if at all. And even when the murderer came to light I had to admit I didn’t see that coming, but suddenly everything fell into place and made sense. Besides the actual murder mystery, there are some other secrets and twists as well surrounding some of the characters and it made for a great read.

I really like Daphe as a main character, she seems like a real person and I like how much she cares about animals. There is an interesting change in Daphne’s life at the start of the book which nicely ties in with the last book and at the end there’s another change and I can’t wait to see how that plays out. I enjoyed reading about Daphne, although she is a bit too curious for her own good.

I also liked how there was a surprising amount of continuity in this book. In this book I liked seeing how some things changed, both in Daphne’s life, but also in the lives of side characters and we actually see some things that happened in book 1 play a role here as well or progress here. There’s also a bit of a set-up for a possible romance that continues here and I am still hoping Daphne and Jonathan will get together eventually, but for now I am just happy to read about their banter.

To summarize: This book is just a lot of fun to read and kept my attention the whole time. I like how the pets play such an important role in this series and many scenes involve a pet or two or three. Daphne is a great main character with an unique outlook on life if a bit too curious for her own good. I liked reading about how she got involved in the murder and how she eventually solved it. It was a great mystery and I had no clue who the murderer was. There were some potential suspects, but things didn’t fell on it’s place for a long time. It felt like we were missing a piece of the puzzle, until toward the end when everything falls on it’s place. I liked seeing more of Socrates, Daphne’s dog and there’s a cat Finkleston that plays a role too. There is a set-up for a big change at the end of the book and I can’t wait to get my hands on the next book in this series. This is quickly turning into one of my favorite cozy mystery series. I would recommend this to both pet lovers and cozie lovers!

What’s the last book you read with pets as side characters?

12 responses to “Review: Dial Meow for Murder by Bethany Blake”