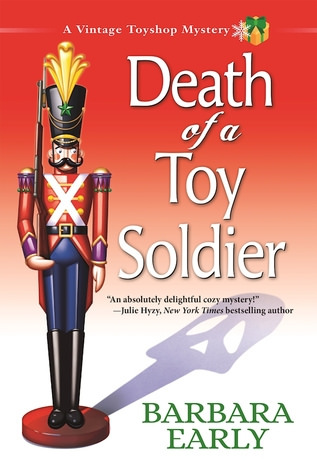 My Review:
I received a copy of this book from the publisher through netgalley and voluntarily reviewed it

I really enjoyed this book! It was a such a great read and I thoroughly enjoyed it. Death of a Toy Soldier follows Elizabeth, her dad and friends while they get dragged into a murder investigation after someone got murdered in their shop. I loved how it featured a vintage toy shop where the main character worked. There are references to toys, products they sell, game evenings and the like and I had such a vivid image of how the shop looked in my head that it almost felt like it really exists. I think the shop mad for a fun setting. The story takes place in winter and around Christmas which was fun as I read it during that time too. This book has a great mystery, fun characters and is well written. It caught my attention from the first page and kept it until the end. Book 2 can’t get here fast enough in my opinion!

The mystery in this one was so well done. I like how natural it felt that Liz and her father ended up helping with the investigation, in some cozies this might feel a bit off, but here it felt realistic. The mystery itself also was a very good one, with lots of red herrings and we get to meet a bunch of fun characters and learn more about them and the town along the way. I was definitely surprised when Liz put the last clue together and we found out who the murderer was, but it did make sense. Even though without that last clue it would’ve been hard to find out who did it. I like the direction the mystery took and how at the end we got a few chapters to nicely wrap things up. It was a very engaging read!

Liz is a fun main character to read about. She runs a vintage toy shop with her father and just like him she has a knack for puzzles and it turns out also for investigating. I liked reading about her and I thought she handled the situations well. I liked reading along with how she was trying to work out the mystery. You could really follow along with her thought process well, which is something I like in a mystery. It felt like I could understand all her actions very well thanks to that. I also liked her father, he used a lot of puns in his speak and half the jokes were so lame, but funny too. He was the police chief until he was forced to retire, but can’t fully shake his old habits and he and Liz do a big part of the investigation together.

Besides that there are enough side characters to fill up the town and they all have their own quirks and personality. I liked the two sisters who lived in the house next to Sy. The current police chief Ken and a chef Jack seem potential love interest for Liz and they both seemed a good match for her. Every side character they meet has a bit of personality and I had no trouble remembering who was who.

To summarize: I really enjoyed this well written cozy mystery and am already looking forward to book 2! The setting and focus on the vintage toy shop added a fun touch to the book. The mystery was very done and I liked how we could easily follow along with Liz her suspicions and thought process. Who the murderer was came as a surprise to me, but it did make sense. There are some good red herrings and a lot of other information that gets uncovered along the way. This book kept my attention from start to finish. And it was a fun book to read this time of the year as it took place around winter and Christmas. The characters all come alive and have their own quirks and personality. I can’t wait to return to this town in book 2! I would recommend this to everyone who loves a good cozy mystery!

What’s the last fun setting you read about in a book?

12 responses to “Review: Death of a Toy Soldier by Barbara Early”