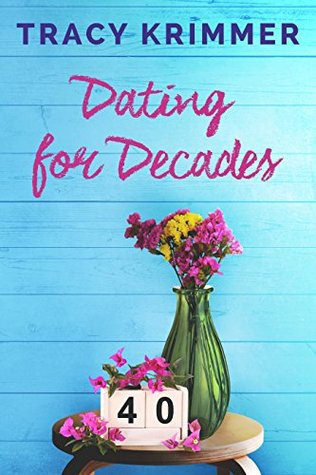 Dating for Decades
by Tracy Krimmer

Blurb:
IT guru Cassie Noble can depend on networks and servers. It’s the people in her life that always let her down. With her fortieth birthday looming, she’d love to find a way to trust and commit to someone.

Eager to work out her problems methodically, Cassie reaches out to her support group. Electrician Keith manages to infiltrate their all-female ranks, infuriating her with his flippant jokes and his all-too laid back attitude. The other women all find him hilarious and she can’t see why. She takes this seriously and he’s doing anything but.

When Cassie needs Keith’s help on a project at her day job, she’s dreading having to work closely with him, however much his hazel eyes make her stop dead in her tracks. As days turn to weeks, he starts to break down her hard exterior. She’s seeing new possibilities. She’s seeing the future…a life that is joyful and bright. A life that includes Keith.

But when a letter from her mother drags her back to the world where Cassie has no control, she shuts down. Can her support group yank her back from that place where hope is lost? And can the man who once drove her crazy be the one who finally doesn’t let her down?

My Review:
There were a lot of things I enjoyed about this book and also quite some things that didn’t quite work for me. When I picked up dating For decades I was expecting a fun romance book about a slightly older character. After reading it I am not quite sure if I would classify this as a romance book, yes there is a romance, but the main focus of this book is main Character Cassie and her journey or story. The writing style of the author worked for me, the pace flowed well and I enjoyed reading the book. I definitely plan to check out some of the author her other books.

Dating for decades focuses on Cassie. Cassie is a workaholic and a control freak, she doesn’t do relationships and started a group for people like her who are older and can’t keep a long lasting relationship. I liked the set-up of the group, although I would’ve liked to see more of it and get to know the other members more. But the book isn’t about them, it’s about Cassie. And while on some points I could relate to Cassie, on other points she really annoyed me. I can’t even fully point out why or find a good word to explain, but there were lots of scenes were she bothered me. I never fully related or connected to her and I didn’t quite like her, although there were scenes were I felt for her or liked how she handled things. She was almost 40 and could act quite immature at times. I also wish we would’ve seen a bit more introspection from her, as sometimes I had trouble figuring out how she felt about things. And maybe that was because she didn’t let herself think about some things, but it was hard to get a feel for her emotions and why she did things at times.

One of the plot points in this book surrounds Cassie her mom, I thought it was very interesting how the author developed this plot point. I am still not fully sure what I think of it, but once it got brought up I was pretty sure I wouldn’t be fully happy with how it got resolved as both possibilities didn’t feel quite right to me. But maybe that’s just me.

I thought Cassie her friends were a bit too pushy sometimes, which bothered me. It was easy to say from their point of view what she should do, but they weren’t in her shoes and hadn’t lived through her life. It did feel very realistic though and that brings me back to something I really enjoyed about this book, it all felt very real and realistic and I really liked that. Cassie struggles with committing and with her mom and she just felt like a real person.

I liked seeing Cassie change throughout the course of this book and while I am happy for her how I also wished we could’ve seen more of how she fell in love with Keith. Keith seemed like a nice enough guy, but I never felt like we got to see below the surface or really got to know him. We never saw his struggles or his personality. Although there was one scene later in the book were some of his personality shined through and how much he cared about Cassie. And that brings me back to my point of how this book is about Cassie. On the one hand I liked how we followed her and saw her journey, but on the other had I wished the other character came a bit more alive. Maybe this is also because I never fully connected with Cassie and having some other characters I did like might’ve made me enjoy this book more. I don’t know.

And then there were some scenes at the end that made me feel. There was sadness, but also other conflicted emotions. The situation was quite the difficult one. I did like how Cassie handled things, but at the same time it wasn’t fully satisfying and I don’t know why. And then later frustration later on about something she did. She jumped to conclusions and I just wanted to tell her to stand still and think things through and talk things through. It was quite sad to see how she had hardened her heart and it did seem realistic she had trouble opening it, afraid to get hurt. It sure was a book that made you think and feel. About what family means, forgiveness, getting older and opening your heart. And how can’t judge people until you really know them.

To summarize: this is a realistic story about a women who struggles with getting older and finding a long lasting relationship in her life. This book isn’t as much a romance, but more Cassie her journey/ story. I liked seeing her develop throughout the course of the book, but on the other hand I also would’ve liked to see more of the side characters. There were some aspects were I could really relate to Cassie, but also things about her that I didn’t like. And I never fully connected with her. There is also the whole plot surrounding Cassie her mother, which made me feel really conflicted and I knew that no matter how it ended I wouldn’t be fully happy with it as it really is a difficult situation. This book did made me feel a lot, especially at the end. I really felt for Cassie and how she struggled and what she had to deal with. All in all I did enjoy reading this book, the writing style worked for me and it really made me think at feel at times. But I never fully enjoyed it and there were lots of small things and specific characters or scenes that bothered me or didn’t quite work for me.

What’s the last book you read which both had a lot of good things and things that didn’t work for you?

10 responses to “Review: Dating for Decades by Tracy Krimmer”