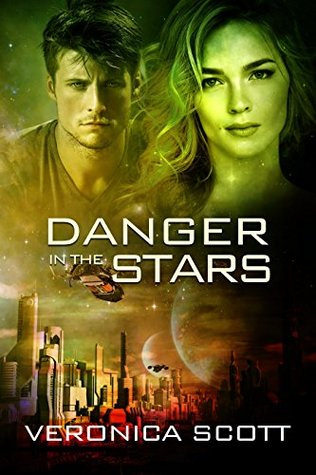 Danger in the Stars (A Sectors SF Romance)
by Veronica Scott

Blurb:
Miriell, a powerful empathic priestess, has been kidnapped from her own primitive planet along with a number of her people, and sold to the evil Amarotu Combine, largest organized crime syndicate in the Sectors. When she and her handler are sent to use her power to commit an assassination, she must leave behind her own sister as hostage to ensure her compliance. Miriell cannot ask for aid without endangering herself and others.

Despite his best efforts, Combine enforcer Conor Stewart is entranced by Miriell, and helps her evade the worst of brutal treatment from the rest of the mob. But Conor must keep his distance, before the lovely empath learns that he has secrets of his own–secrets that could get them both killed.

The situation becomes dire when Conor and Miriell come to the attention of both the Combine overlords and the deadly Mawreg, aliens who threaten the Sectors. Can she save herself and the Mawreg’s next victims? And will Conor help her, or remain loyal to his evil bosses?

Last year I read Stowaway by Veronica Scott that was part of the Pets in Space collection. I liked the story and when I found out she had written two more stories about empaths that loosely connect to that one, I was eager to dive into them. I am glad I finally got to read this one. Danger in the Stars is a great sci-fi romance with action, danger, romance and even a touch of fantasy and religion. I also liked the few hints we got about how this story connected to the Stowaway story and the epilogue was awesome!

Danger in the Stars follows Miriell who has been kidnapped from her home planet and now is forced to work for a criminal organization. I liked Miriell. She is a different character than what I usually see in books. At first she acts very obedient, she is basically a slave and has no freedom and she keeps her anger and drive for revenge inside. I thought she acted very realistic and believable given her situation. While she does what her handler wants, inside she hates doing this and she doesn’t stop wishing for a better life. And when she gets a scrap of freedom she shows she’s force to be reckoned with. Her empathic powers were really cool and I liked how she had to be around nature to build up her powers.

Then there is Connor, who works for another branch of the criminal organization. He meets Mirriel when she and her handler are sent here to help this branch. I found it hard to really get a feel for Connor at first, yes we know he is the love interest, but at first it’s hard to get a grasp on who he really is. Which all makes sense later. He was a bit of this grey character, he seemed nice and wanting to do the right thing, but at the same time he had done a lot of bad things too. There’s a nice twist involving his character later on.

The pace of this book feels a bit gentle at times, but at the same there is a lot going on and I wanted to keep reading. There are parts with action, some nicely placed plot twists and we get a glimpse of the larger galaxy and what is going on in this region called the Sectors. There also is an almost constant feel of danger due to their situation, but I found that worked here for the most part. While most of the story takes place one planet it did get a more distinctive sci-fi feel later on. And ofcourse Miriell is an alien from another planet with psychic powers.

The romance was well done. It builds slowly and then suddenly picks up pace. There’s one sex scene, but for the most part it’s a pretty sweet romance. I do admit I thought the romance developed a bit quickly when it finally started progressing, especially given how the main characters didn’t have as much time to really connect together. But the author did convince me of their love for each other and it was obvious they cared about each other a lot.

The world building is done subtle, but it’s well done. This book is set in a larger world of the Sectors. It’s interesting how all these books take place in the same universe and each book seems to give a piece of the world, but at the same time what you learn in each book is very limited. At least that’s what I can tell so far from this series. I liked that this book had a bit of overlap with Stowaway, but besides that it pretty much reads as a standalone. I liked learning a bit more about this world and it does feel very thought out, but at the same time I just want to know more so the world can really come alive in my mind.

To summarize: Danger in the Stars was a great read with realistic characters. It has danger, action and romance. I liked how realistic Miriell was, she acted meek and obedient at first, but she’s focused on finding a way to free herself and her fellow aliens. And when she gets that scrap of freedom she really is a force to be reckoned with. Her powers are great to read about and I was impressed when we learn the full extend of her powers later on. Connor is a bit harder to read at first, but it all makes sense as the story continued. The romance starts of very slowly, but then gains pace and almost felt like it developed a bit too fast. But the author totally convinced me of the love between these two characters and quickly I was rooting for their happy ending. The epilogue was awesome and I also liked how there were some ties between this story and Stowaway.

Do you like books with an alien as main character?

6 responses to “Review: Danger in the Stars by Veronica Scott”